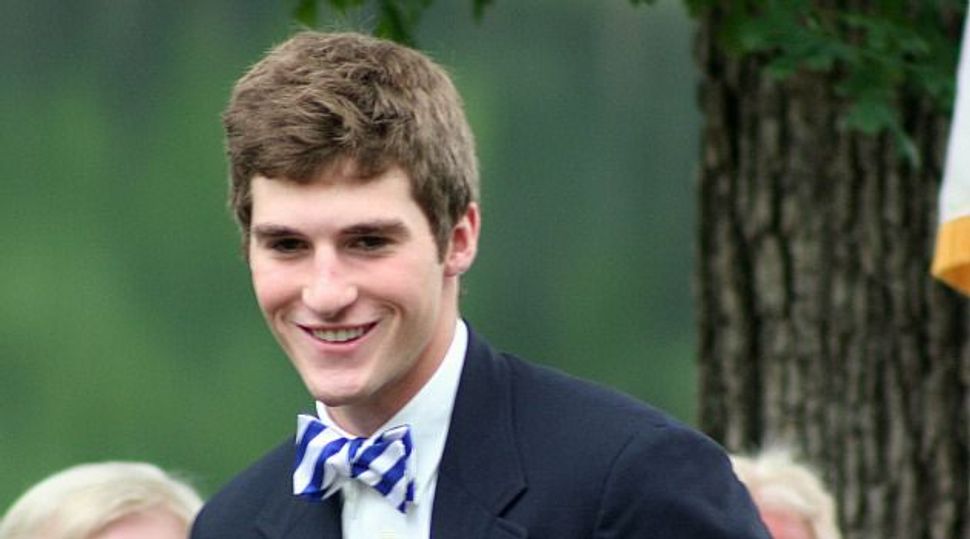 Proud and Idealistic: Andrew Pochter was remembered as an idealistic star at his high school ? and one who was keenly aware of his Jewish faith. Image by courtesy of blue ridge school

As co-manager of Kenyon College’s Hillel, Andrew Driscoll Pochter was asked to give a speech last year to his fellow students to mark Rosh Hashanah.

The idealistic 21-year-old from suburban Washington D.C. spoke about how celebrating the High Holidays helped him explore his Jewish faith.

“Entering the New Year really resonated with him,’ Marc W. Bragin, director of Kenyon’s Hillel. “He was so excited just to go out and discover things. His passion really came out that Rosh Hashana morning.”

Pochter, who was stabbed to death during anti-government protests in Egypt on June 28, was remembered by friends, teachers and colleagues as a curious, passionate and idealistic young Jewish man.

He was eager to help others, especially in the troubled Middle East, where he hoped to make a difference building democracy after the Arab Spring protests.

“(Andrew) really made sure that people were taken care of,” Bragin said. “What really stands out to me about Andrew is how incredibly welcoming he was to different people and to different ideas. He had a passion for learning, for learning about other people and other cultures.”

Pochter, who was teaching English to children in the Egyptian port city of Alexandria, was killed when a protest turned violent near an office of President Mohammed Morsi’s Muslim Brotherhood party.

A statement from his family said Pochter had been “witnessing a protest as a bystander and was stabbed by a protester.” He was filming the protest with his cell phone camera, an Egyptian official said. He died in a military hospital.

Pochter’s family said in a statement that he “went to Egypt because he cared profoundly about the Middle East. He had studied in the region, loved the culture, and planned to live and work there in the pursuit of peace and understanding.”

“Andrew was a wonderful young man looking for new experiences in the world and finding ways to share his talents while he learned.”

A junior at Kenyon, a famously progressive liberal arts college in Gambier, Ohio, Pochter was a member of the rugby team, a pledge at the Alpha Delta Phi fraternity and co-manager of the campus Hillel house.

Zachary Caputo, 21, who lived across the hall from Pochter in their freshman year at Kenyon, told the Washington Post that Pochter wore his enthusiasm for the Middle East on his sleeve.

He described his dorm room as “an organized chaos,” with tapestries, rugs and knickknacks from his time living with a family in Morocco after high school.

Those who knew Pochter growing up in Chevy Chase, Md., say he was always a special person — someone who left a mark on everyone he came across.

“In electing to share his language skills as a student and teacher abroad, Andrew Pochter is a tremendous example to fellow alumni and current BRS students,” Darrin wrote in an email. “Andrew’s untimely death is nothing short of tragic. Our thoughts and prayers are with the Pochter family. We grieve together.”

John Young taught Pochter in his American Studies class during his senior year at Blue Ridge School, and was also his sophomore lacrosse coach. He called Pochter one of the most impressive students he has come across in 42 years of teaching.

“He was a remarkably decent and honorable young man,” Young said. “A lot of young men that age do a lot of talking about what they’re going to do. Andrew was always a young man who acted rather than just talked. He did things.”

According to Young, Pochter’s interest in the Middle East was obvious even in high school.

“He was keenly interested in the Middle East and Arab countries,” he noted. “He was able to look at things from the perspective of the people of that region. What he hoped to accomplish was to find a way to help bridge the gap and to work out, or help contribute to some sort of improvement in the life of [the people from that region]. He was as fully committed to that as almost any young man that I have known. “

The last time Young saw Andrew, he had just returned from a summer in Morocco. In an article for Al Arabiya, Pochter described the effervescent mood gripping the country, immersed in the Arab Spring.

“To Moroccans and to many other Arabs this [protest] was something quite foreign; and at that level and volume, it was something completely new and surprising,” he wrote. The protests in major Moroccan cities such as Casablanca, Marrakech, and Rabat demonstrate a new sense of solidarity as citizens find themselves now reaching out beyond family to community involvement. Neighbors are re-connecting with old neighbors by marching together; strangers are finding common ground; and average citizens are realizing their true potentials in the real world.”

Pochter impressed his hosts in Morocco as a down-to-earth, earnest person who embraced learning about everyday life in the Muslim world.

Hachimi Taoufik, a teacher who taught Arabic to Pochter in al-Jadida, Morocco, told Al-Arabiya that Pochter spent most of his time staying in modest homes despite having a host family that lived in a palatial villa.

“He loved to go buy sardine sandwiches — he loved to come home and cook with my wife and kids, Taoufik recalled. “He even liked to go grocery shopping to cook some of the meals he wanted to share with us,”

Pochter’s optimism about the region and his ability to make a different was palpable after he returned from the region.

“I just think he felt really energized about being able to do something to help work out a better resolution to the issues that we currently have over there,” the teacher said.

Bragin said that eagerness to learn and help were what drove Pochter back to the region.

“He was curious, he was passionate about the Middle East,” Bragin said. “He really wanted to help people. It was evident from his actions that he tried to do that every single day. “

According to a statement released on the newly created “RIP Andrew Driscoll Pochter” Facebook page, Pochter had been planning to spend his spring semester in Jordan.

“Andrew was a wonderful young man looking for new experiences in the world and finding ways to share his talents while he learned,” the statement read, adding a request that his family’s privacy be respected during this difficult time.

People from all over the world rushed to post their condolences on the social media page, some family acquaintances and friends, but also strangers from as far away as Europe, and of course, the Middle East.

Ragaa Moustafa Mohamed was one of many Egyptians who apologized to the family on behalf of her country for the killing. They called him a martyr in their own struggle for democracy.

“I know that no words can bring u peace,” she wrote. “As an Egyptian I feel responsible for ur loss … I promise u that we won’t stop & ur sons legacy will continue … & we are extremely sorry beyond description.”

Friends from high school also shared some memories on the school’s Facebook page.

“Everyone that went to BRS while Andrew was there can attest that they have multiple stories that are some of their favorite memories included Andrew in them,” wrote Anderson Will Moss, who played lacrosse with Pochter for the Blue Ridge Barons. “Andrew wanted everyone to love each other, so that is what we can do to honor him.”