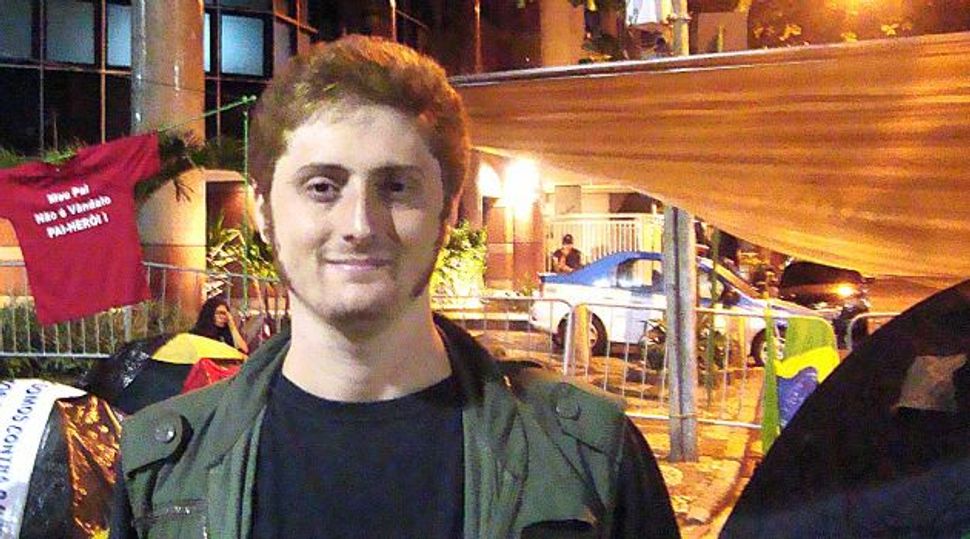 When Alan Rochlin joined hundreds of thousands of Israelis who took to the streets in 2011 to protest skyrocketing living costs, he never imagined he would be doing the same in his native Brazil just two years later.

But as Brazilians made international headlines in late June with massive anti-government protests, Rochlin, a 21-year-old marketing student and leader of the Jewish youth movement Chazit Hanoar Hadrom Americait (Youth Front of South America), was one of many Jews among them.

For Rochlin, the connection was obvious.

“Israeli society took to the streets in order to have a debate and start a dialogue,” he said, recalling his experience during an extended stay in Israel. Similarly in Brazil now, “we are debating, questioning and demanding change, and we’ll follow through to make sure [changes] are really going to materialize.”

Rochlin, who lives in Rio de Janeiro, is far from alone. Jewish movements such as Hillel, Habonim Dror and Chazit Hanoar, and their members, have joined the wide cross-section of Brazilians now rocking the country with their protests. But while the Jewish protesters’ sentiments are part and parcel of the feelings sweeping across Brazilian society, many cite their identity as Jews as a primary wellspring of their activism.

“I believe the highest call of my Jewish identity is to change the world. I hold tikkun olam [repair of the world] as the most coherent expression of Jewish values,” said Bruno Cintra, a blogger well known in the Jewish community for his writing on Brazilian culture and politics.

Cintra spoke to the Forward while sitting on a plastic chair in the middle of Delfim Moreira Avenue, one of Rio de Janeiro’s most expensive and exclusive beachside roads. After participating in many of the protests, Cintra decided to join a movement called Ocupa Cabral (Occupy Cabral), which set up camp with a dozen tents and pan-drumming demonstrators in front of the building of Rio de Janeiro Governor Sergio Cabral on this tony street. Police evicted Cintra’s group on the night of July 1, the 11th day of its sit-in. But the group is already planning a reoccupation.

“After so many years of crime, robbery and massacres, the people took to the streets and erupted in peaceful protests,” Cintro said, alluding to the corruption that protesters cite as one of the main targets of their ire.

The protests peaked most recently on June 20, when hundreds of thousands of demonstrators filled the streets of downtown Rio in a peaceful demonstration; it was the largest protest in the country since the pro-democracy rallies of 1984. The show of people power came after a week of demonstrations, held in more than 100 cities in nearly every state of the nation. Protesters, many of whom come from the middle and upper-middle class, cited a panoply of long-standing discontents, including corruption, skyrocketing living costs and what they see as the refusal of the political class to even hear their complaints. Still, the true meaning of what’s going on remains hard to grasp.

The demonstrations were not connected to any parties. Indeed, whenever members of political movements showed up, they were asked (with varying degrees of courtesy) to put down their flags and banners. Federal, state and local governments were caught off guard, which prompted many to react with violence against unarmed protesters. Political leaders from all sides — who at first scrambled to hijack the movement —became scared and silent as they quickly realized they were not welcome to join, and rather were seen as part of the problem.

Social media played a huge part as a mobilization tool; most demonstrations were organized via Facebook, and the word spread thanks to Twitter. Still, no one expected the huge response, not even the Movimento Passe Livre (Free Fare Movement) group from São Paulo, which launched the protests to complain about public transportation price hikes. And no one has come forward as a leader of the masses. This spontaneity attests to a general sense of irritation but has failed to produce a focused set of demands for the movement.

It is, perhaps, not surprising that Jews have joined in these demonstrations readily. Like most of the protesters, the Jews of Brazil, who number more than 107,000, are largely members of the middle and upper-middle-classes, and are highly integrated into Brazilian society. As a group, they stand mostly behind liberal values. Indeed, it’s nearly impossible to find members of Brazil’s Jewish community who will agree to make comments against the movement. Efforts to reach Paul Israel Singer, one of the founding fathers of the leftist Workers Party now ruling Brazil, were unsuccessful. Leaders of Brazil’s culturally conservative Chabad-Lubavitch community also declined to comment, as they consider themselves apolitical.

First established during the 16th century by Jews fleeing the Inquisition, Brazil’s Jewish community is today mostly Ashkenazi. Synagogues and organizations, including Zionist groups, operate without interference, and episodes of anti-Semitism, though they occur, are not common.

So far, the government has responded to the waves of protest by, among other things, canceling the scheduled bus fare price hikes in many cities. A widely criticized constitutional amendment designed to limit the investigative powers of public anti-corruption watchdogs has also been overturned.

But at this stage the protesters are seeking much more, however ill defined. Despite government concessions and an effort to appear supportive of the demonstrations, President Dilma Rousseff has suffered a significant dip in popularity, which in June slid to 30% from 65% in March, according to a recent poll.

“This mobilization was necessary, and it still is,” said Evelyn Silva, 39, a Portuguese and English teacher and a former member of the Zionist group Habonim Dror. “All of a sudden, people who had so much choked up their throats decided to grab a piece of cardboard and a Sharpie and go outside to speak their minds and make their demands.”

Silva, who has participated in all but two of the demonstrations held in Rio de Janeiro, saw Judaism as a strong influence in her decision to join the protests; she hailed the concept of tzedakah, the obligation to aid the needy, as a great example, as well as the teachings in the Pirkei Avot, or The Ethics of the Fathers, that are part of the Talmud.

“Jewish ethics has a lot to do with my identification with socialism,” said Silva, who is a member of a socialist opposition party the Party of Socialism and Liberty. “The saying ‘two Jews, three opinions’ shows to what extent questioning the status quo and critical analysis are milestones of our culture.”