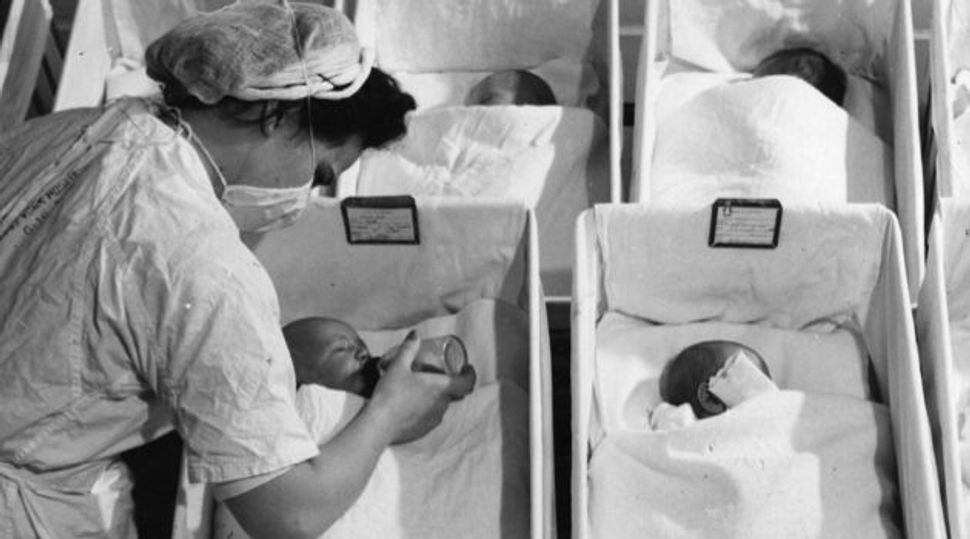 When Shmuel, my sixth child, arrived with Down syndrome, I cried bitterly as I imagined myself dead and him homeless; I played hostess to numerous other fantasies, my own and those of other women, who came to cry by my childbed.

But when I returned to life and found my husband distressed and exhausted, I reassured him that I would handle everything; he could return to work just like he did after the births of our other children. All at once and without realizing it, I magically summoned the courage to be Shmuel’s mother.

Ten years later, I awake in terror from a dream that Shmuel and I are in a sealed room where we will perish as water rises quickly to the ceiling. (“You’re feeling overwhelmed, Leslie. Duh,” says my husband, not looking up from his book.) By moonlight, I have crawled into garbage bins to retrieve the faux leather jacket that Shmuel has discarded once again after becoming overheated on the street.

And by daylight I have braved a ruthless gang of 11-year-olds seeking to reclaim a bicycle that Shmuel borrowed but forgot to return. (“Bicycle sharing,” he would call it.) But when Shmuel, knackered and self-satisfied, walks into the house after an afternoon’s absence of indeterminate length and implausible itinerary, my heart expands in gratitude. For his place in his family is as firmly settled as my own; indeed, it was never seriously in question.

It is by now a pretty widely held truth that nobody, but nobody, wants to give birth to a child with Down syndrome. Now there are at least two ways in Israel for a woman to rid herself of so untoward a burden. She can, as my more secular-minded cousin did, abort early. Or she can do what my ultra-Orthodox neighbor did and “abort” late by unloading her cargo at the nearest hospital and fleeing. (In the latter case it is probably not advisable to look, for even a brief moment, at the child’s face. As every new mother knows, it will create an impression that time can never erase.)

I have heard many stories over the years of women in ultra-Orthodox communities who have availed themselves of the latter option. Here is how the system works in my Jerusalem neighborhood:

After a mother leaves the hospital, her first stop before returning home — strangely empty-handed — is the ultra-Orthodox “family planner,” a well-known figure who is a pillar of trust and discernment in such a matter. The mother leaves her newborn’s details with her.

Then, the family planner will put an ad in the local Orthodox paper, Yated Ne’eman, (“Wanted: Mother”) to find a home for the child since the hospital extends its hospitality to healthy newborns for just one month. The placement is easier than one would think. True, there’s a stigma attached to birthing and raising a Down syndrome child of one’s own. But paradoxically, a family who shelters such a child is seen as doing an immense mitzvah; there are plenty of eager mothers willing to raise the baby, until it becomes too much of a burden and is passed to another home. And so, with the ease and simplicity by which one might get rid of an unwanted kitten, an unwanted baby is cast out into the world.

What the family planner cannot provide the mother with is an alibi to explain to her remaining children where the joyously awaited babe has gone. It is a tricky question indeed, one best left to the inspiration of the “bereaved” mother.

The family planner does, however, advise to begin by saying that the baby, whom nobody has ever seen, is to be reared in an undisclosed location by unknown people, to be taken back at a more suitable though unspecified time. Everyone, including the parents, can live with this fiction for a while.

But the child is almost never returned home.

The family planner isn’t the only one in my neighborhood who sees the mothers of Down syndrome babies as a charitable cause. After I gave birth to Shmuel, I had an early morning hospital visit from my friend, a nurse. She took a look at him and wondered aloud whether he really had Down syndrome. (An examination of his hand convinced her. “Well, if it’s only in the hands,” I must have thought.)

Then she made the staggeringly handsome offer to take the baby off my hands at once, and with him, time itself — the time of his birth so freshly remembered, and the time of my life to come, wedded to a child unsound by nature, unseen and unsung. Did she indeed despise the baby, or did she suspect that I did?

A great smile spread across my face, the first since his birth. “Do I get to choose then?” I marveled to myself, as I bantered with her. “Can you really make good on all that?” I asked. And so it seemed she could. But like the elderly guest at a wedding party, who eyes the indigestible but alluring morsel laid down before her and politely waves it away, I rejected an offer that something told me I could not accept.

Ten years later, on a recent brisk Sabbath afternoon when the streets were already bristling with strollers and the parade was in full swing, I recognized the family planner. There were two children with Down syndrome gamboling at her legs; over the years, she had taken in four of these castaways herself.

I wanted to show off my own immaculate foundling if only I could locate him. Lately, his “three minute” strolls around the neighborhood had lasted hours. I spotted Shmuel pretty soon, in the embrace of another boy entering a building, but he had his back turned to us, so his full glory was shielded. “

Ah, I recognize them by their gait,” she remarked innocently. I was abashed and angry. “I am not accustomed to referring to my children in the third person,” I sharply replied. “You have no idea what has gone into the grooming and education of this child.” But she was not particularly impressed, so I let the conversation flag.

How did she feel about her own work? “Frankly,” she informed me in a whisper, glancing admiringly at her children, who were now tumbling over each other and into us in their revelry, “their real parents are missing out. I don’t judge, however,” she added hastily. And then, pulling herself up, she recited the story she reserved for the ambivalent and the unconvinced, the one she had told so often that the facts were probably no longer accurate — a story by which to lend an air of propriety, even of sanctity, to her charitable dealings.

“There once lived a family,” she began, “whom you and I both know,” and here she broke off to indicate the street we were passing. “They were blessed with 13 strong and healthy children. When, by the grace of God, the 14th child arrived with Down syndrome, and ill to boot, the mother was compelled to be so often in the hospital tending to this, her weakest of children, that the whole family fell to pieces, and the father, unable to handle the ruination of his life, made off to America, or to Honduras.”

“I was about to object — “But you can’t honestly believe that the life of that child was not worth caring about!” — when the family planner was distracted by the sudden flight of one of her children and ran off in bemused pursuit of him.

I was left to consider that we were probably indebted to the ultra-Orthodox for the practice of “planned parenthood” in at least one of its oldest forms. But just as God is said to cry as a couple prepare to divorce, so I’m certain he cries when a mother, in a blindness that has been inspired by fear and ignorance, parts from her child and sends him, unloved, into the world.

Leslie Kolbrener lives in Jerusalem with her husband and children.