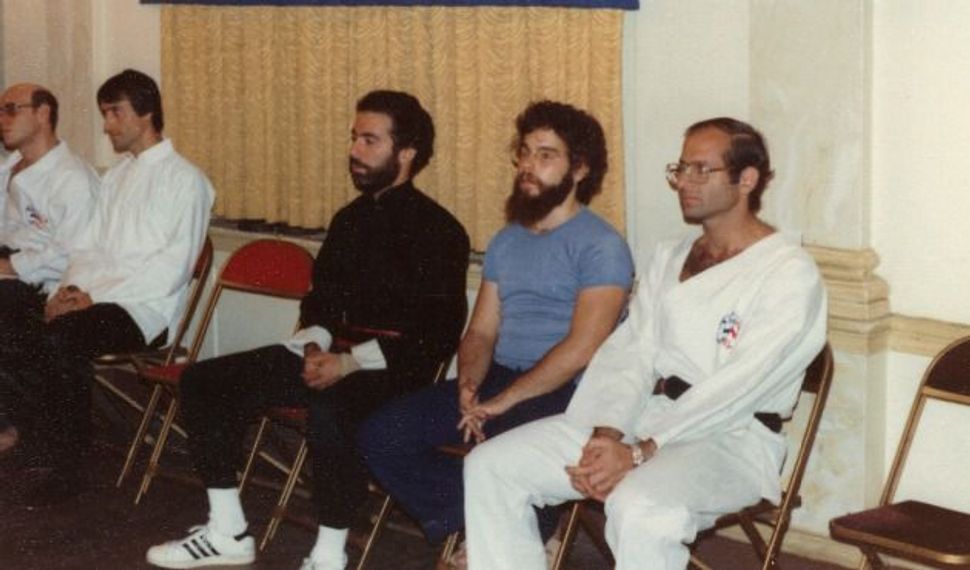 Accused: Richard Andron, right, taught tora dojo, a Jewish-inspired form of martial arts, at a Manhattan Jewish center in the 1970s and early 80s. Alleged victims say he molested them at sleepovers at his apartment.

To the Orthodox boys of Englewood, N.J., and Monsey, N.Y., Richard “Ricky” Andron was unbelievably cool: a 30-something bachelor and martial arts expert who hosted Sabbath sleepovers at his apartment on Manhattan’s Upper West Side, where they played cards and looked at pornographic magazines.

But Andron’s apartment, just off Central Park, was a trap, according to interviews with about a dozen men who say they were abused or know people who were abused by Andron during the late 1970s and early ’80s.

“He manhandled me below the waist and caused me to have my first (sexual) experience,” said one of the men to step forward, who requested anonymity. “I was a 13-year-old and I had an experience that was not something a 13-year-old boy should experience from another man.”

Another man, who woke in the night to find Andron “fiddling below the sheets,” said: “He was the perfect pedophile. He had you doing things you knew you should not be doing, in terms of magazines and [going to see] R-rated movies, so it made it awkward for any victim to volunteer information.”

Dave Raben, a Miami attorney who specializes in criminal defense and who identified himself as representing Andron, declined to comment.

Andron, 67, first came to public attention when he was named in a high-profile lawsuit filed July 8 in U.S. District Court in White Plains, N.Y., by 19 former students at Yeshiva University High School for Boys, in Manhattan. The suit accuses Y.U. administrators and teachers of covering up decades of physical and sexual abuse. The abuse allegations are principally against two former Y.U. high school employees, Rabbi George Finkelstein and Rabbi Macy Gordon.

But the suit also alleges that Andron was “allowed to roam the halls” of the high school dormitory during the late 1970s and early ’80s even though he had nothing to do with the school. It cites three men — a Y.U. college student and two Y.U. high school students — who say Andron invited them to stay at his apartment, where he attempted to touch or did touch their genitals.

When asked for a response, Y.U. said it could not comment on pending litigation.

Seven more men have independently told the Forward that they were abused by Andron.

Andron’s orbit extended beyond Y.U. He sometimes helped his brother, Michael Andron, teach classes in tora dojo, a Jewish twist on karate, at the Jewish Center, in Manhattan. And he was a regular volunteer in the New York and New Jersey area with the Modern Orthodox youth organization the National Council of Synagogue Youth.

Andron met and befriended many of the boys through NCSY.

One of those men told the Forward that he warned NCSY about Andron during the late 1970s, but the group’s regional director, Baruch Lanner, did not report Andron to police or impede Andron’s access to boys. (Decades later, Lanner was embroiled in a scandal of his own after being accused of sex abuse and child endangerment of two girls. In 2002, he was sentenced to a seven-year prison term.)

The man said that between the ages of 13 and 16 he often stayed at Andron’s apartment so that he could be closer to a local tora dojo class. During that three-year period, the man said that Andron abused him regularly.

“I told him this was not really right,” the man, who is now 50, recalled, “and [Andron] would convince me this was what I had to do to have a healthy relationship with women.”

When the boy finally realized, at the age of 16, that he had been abused, he told his parents. He said they instructed him to confront Andron, alone, and that since Andron was a martial arts expert he should do so in a Manhattan synagogue.

One December, during the late 1970s, he confronted Andron. “I said, ‘You abused me, you sexually assaulted me and you are a child molester and I don’t want you coming near me and my family,’” the man said.

He continued: “[Andron] got angry, like a jilted lover. I said, ‘If you come near me again and touch me again, I will kill you, so don’t even think about coming near me.’”

The boy’s parents told him he also had to warn Lanner, who was the NCSY regional director about Andron. At the time, Lanner was infamous among Modern Orthodox youth for his habit of kneeing boys in the crotch and for taking teenage girls for long Sabbath walks in the woods.

The man said he described in detail to Lanner what had happened to him, but Lanner did not remove Andron from his involvement with NCSY.

An Orthodox Union spokesman, Mayer Fertig, confirmed that Andron was involved in NCSY “to the best of our knowledge in the late 1970s and early 1980s.”

Fertig said that NCSY “today is altogether different from the one of that era” and that “difficult, painful lessons” from that period had been learned. He directed the Forward to a 14-page Conduct, Policy, and Behavioral Standards Manual, which pledges that “NCSY’s commitment to the physical, psychological, and emotional well-being of all NCSY professionals, volunteers, and NCSY’ers is non-negotiable.”

“NCSY and the Orthodox Union stand by those words and today go to great effort to enforce a policy of zero tolerance for any inappropriate activity,” Fertig said.

Several months ago, the Forward attempted to reach Lanner at his home in New Jersey to ask about Andron. Lanner’s wife, Sarah, said that because of a “serious medical condition he cannot comment or have discussions at this time.” Subsequent attempts to reach Lanner have been unsuccessful.

On July 16, another man, who said he was abused around 1983 and 1984, told the Forward that NCSY was aware of Andron’s problem.

The man said that he was abused by Andron twice when Andron slept over at his home during late 1983 and early 1984.

The man, then age 14, said he was too afraid and ashamed to tell his parents what happened. But a few months later, after his parents told him that Andron would be sleeping at the house again, the boy confided in school friends. They, in turn, told the head of the yeshiva, who called the boy’s mother.

The man, now 43, said that he pleaded with his parents not to press charges. Instead, his mother called every family that was friendly with or had hosted Andron to warn them about him.

The man said his mother also spoke to an official at NCSY who told her that Andron was receiving counseling for his problem. His mother was assured that Andron would never be associated with NCSY again, the man added. He believes that it was this last episode, in 1984, that forced Andron to leave New York for Florida, where he has lived ever since.

The man said that he regretted not pressing charges. “I wish at the time I was stronger,” he said. “But I was a 14-year-old kid who was abused. I regret it, but I think my parents made the right decision in light of my state of mind at the time.”

Andron is named in the multiparty lawsuit against Y.U. because former students say they believe Y.U. staff ought to have known he posed a threat.

The suit says that Andron was a “personal friend” of Finkelstein, an administrator at Y.U.’s high school. Andron “frequently notified Finkelstein that boys who had slept over at Andron’s apartment would be late or absent for classes at [the school],” the suit says. “Finkelstein thus knew, excused, condoned and facilitated Andron’s sexual abuse of numerous [high school] students.”

One of the high school students who said that he was abused by Andron and who is a plaintiff in the lawsuit told the Forward that Andron “would sit with [the boys] and talk to them. I didn’t think it was too weird, because I was a kid and he befriended me.”

The man, who is now 45 and living in Tel Aviv, said Andron invited him to stay over at Andron’s apartment one Sabbath around 1983. He said that when he arrived, Andron showed him into a bedroom and gave him a stack of Playboy magazines.

After leaving the boy alone for a while, Andron returned to the room and proceeded to touch the boy’s penis, according to the former student. “This was really my first sexual experience of skin-to-skin contact,” the man said. “This has stayed with me for years.”

Adler, a director of Y.U.’s school dormitory from 1981 to 1986, told the Forward in an email several months ago that he recalled Andron’s name but not his face. Adler said there “was simply no way of restricting access to the high school dormitory.”

He added: “In terms of Ricky, it didn’t seem suspicious for him or anyone to come and visit any of the boys. Sometimes kids had visitors from their home neighborhoods who were on campus who took the boys for dinner or a movie. There were no red flags.”

Adler also said that “any expectation on my part or that of any of the counselors was unrealistic, given that the building had no security, no guard, no access code…. It was unreasonable to expect that we could have monitored who was coming in. There was simply no way to do that.”

Ehrlich did not respond to several requests for a response.

Andron moved to Florida during the mid 1980s. In 1986 he told the Palm Beach Post that he left New York because his boss at a “major oil company” where he worked would not allow him to leave early on Fridays for the Sabbath. By then, Andron had a wife, Sue.

The Androns were among the earliest families to build up the Boca Raton Synagogue, an Orthodox congregation that today has more than 700 families.