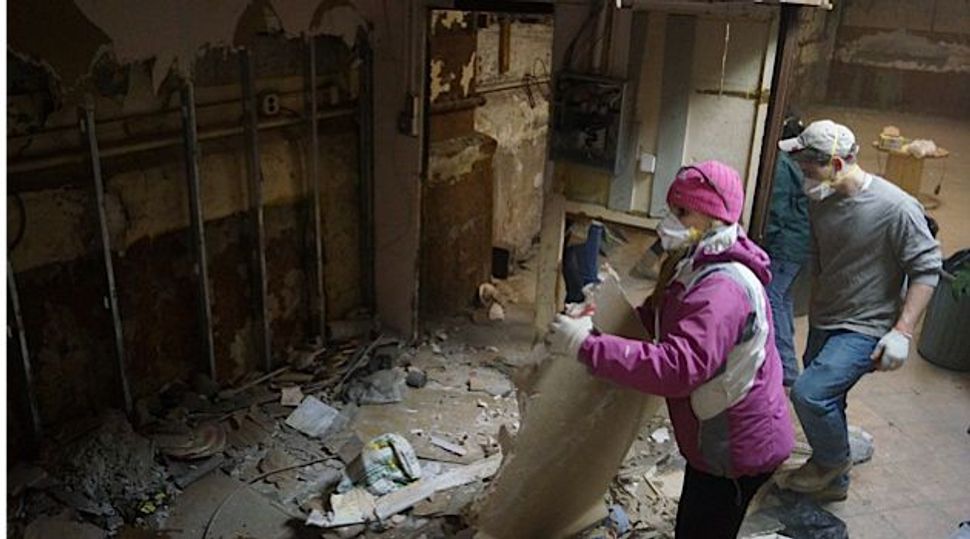 On a recent Friday afternoon in Brooklyn’s Brighton Beach, groups of teenage girls headed toward the ocean as shirtless men on boardwalk benches sent occasional catcalls their way and children walked by licking ice cream cones.

For much of this seaside neighborhood of Russian immigrants, the rites of summer appear unchanged nine months after Hurricane Sandy left scores of residents without power for weeks and cars floating down the main thoroughfare of Ocean Parkway.

But amid this seeming normalcy, many synagogues and other houses of worship remain in limbo. Viewed as constitutionally ineligible to receive aid from the Federal Emergency Management Agency under current policy, they are waiting for promised congressional legislation to break the logjam.

They may have a long wait.

A bill that swept through the House of Representatives would effectively revise government restrictions on FEMA, but it has been dormant in the Senate since March. The bill has been backlogged behind other legislation such as immigration reform, and stymied by Senate leaders who are reluctant to approve a bill that challenges the First Amendment. To reinvigorate the discussion, proponents of the bill introduced a counterpart bill into the Senate on July 10 to alleviate concern over separation of church and state issues.

But a host of synagogues that once anxiously anticipated a decision now doubt that the bill will ever become a law. And while disillusionment has set in, the repair costs, totaling hundreds of thousands of dollars for many synagogues, have not gone away.

“Our hands are completely tied waiting for the state to give us the money we so desperately need to rebuild,” said Levi Pine, director of operations for the Russian American Jewish Experience, a local group housed in a heavily damaged Jewish center. “For many, Sandy is a thing of the past; for us still waiting, it’s something we deal with daily.”

The headquarters of RAJE is normally another popular summer destination for young Russian Jews, providing classes, discussion groups and barbecues for hundreds of students and alumni. But the only inhabitant during a recent visit to the group’s office, located inside the Jewish Center of Brighton Beach, was a lone blackbird that flew freely throughout the dimly lit hallways. past piles of sheetrock.

The JCBB incurred more than $1 million in damages from the storm, including flooding in the synagogue where RAJE hosted daily services and weekly Sabbath programs. Pine estimated that only 35% of damages in the JCBB have been repaired, largely through funds provided by flood insurance and through volunteer help. Yet its insurance claims have been successful only sporadically. For example, its insurance company agreed to reimburse costs toward restoring electricity in the building, but rejected the repair of a small broken window caused by flooding, according to Yehuda Loweff, president of the JCBB.

Other congregations are still using temporary spaces. Bruce Sklover, president of Temple Israel of Long Beach, said that after the lower level of his building was wiped out by the storm, all functions were moved to smaller spaces upstairs, even converting a meeting room into a makeshift chapel. The synagogue applied for FEMA aid in case the bill did pass, but Sklover is not counting on the legislation passing.

“I’m on every conceivable email and alert list,” Sklover said. “But after the last eight or 10 months, it’s more of a hope. It’s not something I check daily.”

Three blocks away, at the BACH Jewish Center, only about 10% of repair work has been completed, according to Jessica Cutter, director of operations. “We ripped down the walls and put up bare sheetrock so we wouldn’t have mold,” Cutter said. “It almost looks like a house when you just put the walls up.”

At RAJE, they’ve put up curtains to cover their dilapidated walls.

“There are thousands of members just looking for morale,” Pine said. “FEMA would simply help build morale. Everyone’s basically feeling like orphans. And we get mixed messages from FEMA.”

A glimmer of hope may be arriving shortly. In early July, Senators Kirsten Gillibrand and Roy Blunt, respectively a Democrat of New York and a Republican of Missouri, introduced a counterpart to the House’s Federal Disaster Assistance Nonprofit Fairness Act of 2013, which was approved with a vote of 354-72 in February. In hopes of assuaging concerns from FEMA and civil liberties groups over religion-state separation issues, the new Senate bill limits assistance to houses of worship to repair of their physical structures and support systems, such as heating or air-conditioning. Items of religious character such as Bibles, Torahs, Korans, hymnals, or iconography used for religious worship, are excluded.

“Faith-based groups deserve the same opportunities to receive federal disaster aid as other nonprofit organizations,” Blunt said in a statement after the bill was introduced.

The revised bill will be referred to the Senate’s Committee on Homeland Security and Governmental Affairs, where proponents hope the committee, chaired by Delaware senator Democrat Tom Carper, will now take a deeper look at providing aid.

Carper, who publicly voiced serious reservations about the constitutionality of the earlier House bill, declined to comment on the new legislation.

In a statement provided to the Forward in late June, Carper said he had concerns about the previous version of the bill after a careful review of the legislation, and after significant court cases and meetings with legal experts, supporters and opponents of the bill. “After much thought and careful consideration, I have serious reservations about the bill and believe it would likely be unconstitutional,” Carper said.

Carper’s office did not have a comment on the new legislation.

Although timely approval is essential to the synagogues reeling from the storm, one criticism of the House’s handling of H.R. 592 was the hastiness in which it was passed. “I think the Senate is looking at this much more responsibly,” said Barry Lynn, executive director of Americans United for Separation of Church and State. “It’s good [that] in the Senate, people are raising the right kind of questions.

But advocates of the bill believe there has already been proper discussion and that a timely resolution is vital.

Representatives from groups like the Orthodox Union, the Conference of Catholic Bishops and the American Jewish Committee met with Carper’s staff, but the senator declined to waive his committee’s jurisdiction to consider the bill and rush the legislation to the Senate floor for a vote. Reached by the Forward in July, Nathan Diament, executive director of public policy for the O.U.’s Institute for Public Affairs, believed that Gillibrand and Blunt’s bill would help advance the legislation.

Though the Senate has not been engaged with the matter, it houses some vocal supporters. Sen. Jeff Chiesa, a New Jersey Republican, announced his support of the bill the day after its introduction. Senators who have previously supported the bill include Utah Republican Mike Lee, Maryland Democrat Ben Cardin and Arkansas Democrat Mark Pryor.

While synagogues wait to see if the new Senate proposal will change discourse, several have taken alternate routes to piece together a recovery plan. At RAJE, leaders enlisted the help of Third Day Missions, which is led by the Rev. Daniel Delgado of Staten Island and coordinates Christian volunteers from around the country to help with recovery work. Pine was thankful for their help, but he also said that they couldn’t be expected to provide the same level of work as professional contractors. He added that with volunteers, it’s often unclear how many will come each week and what tasks will get done.

Cutter, who began working at the BACH Jewish Center as recently as this past spring, said she could no longer sit around and wait for the bill to be passed. “We just need to operate on a day-to-day basis,” she said. “It is something we’re depending on. I just have to keep moving forward, trying to fundraise where I can.”

Jeffrey Goldfarb, a member of Young Israel of Kings Bay, in Brooklyn’s Sheepshead Bay, helped his congregation put together applications and forms for aid. The building incurred $70,000 in damages and recently reopened its main sanctuary through the use of borrowed funds. “The minute I saw the bill, I thought it was interesting,” he said. “I thought it was a great thing to do, but it’s just terrible that it’s taken this long.”