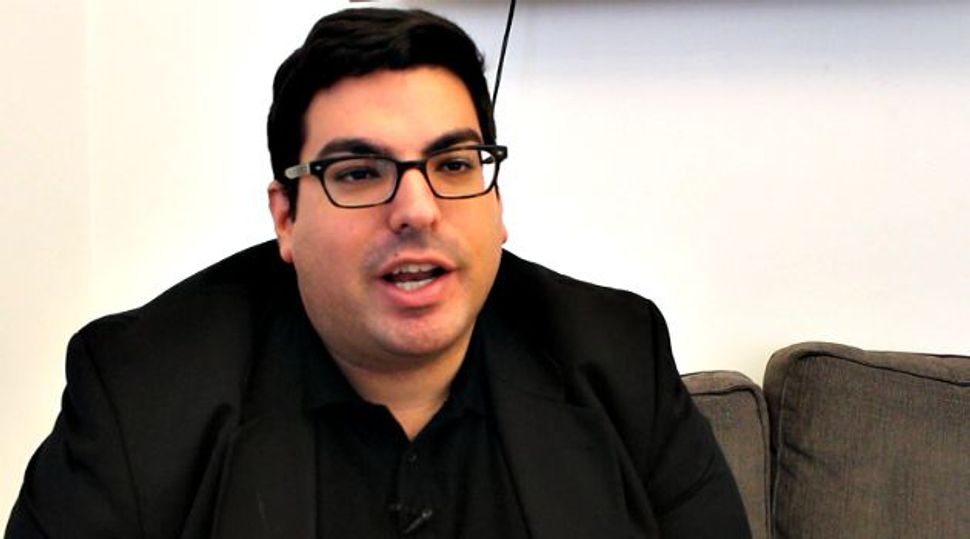 Out of Shadows: Roy Naim, an Orthodox Jew who was born in Israel, once led a secretive life because of his status as an undocumented immigrant. Now, he has stepped into the limelight and is one of the most recognizable figures in the struggle for immigration reform. Image by yermi brenner

For 25 years, Roy Naim, an undocumented immigrant, led a secretive life. Having no identification papers, he could not drive, rent an apartment or be legally employed. Worst of all, he constantly feared being deported from his home and family. All he did was try to lie low, and somehow get by.

Naim is still undocumented. But in the past year he has been doing anything but lying low. Since June 2012, the young man, who spent his entire adult life in the shadow of society, has appeared on the cover of Time magazine, was featured in a documentary and was interviewed by the New York Daily News. He is constantly on Twitter and Facebook, promoting a new immigration bill that would secure his future as an American.

Naim, 29, an Israeli-born Orthodox Jew, has become the Jewish face of activism for immigration reform.

In many ways he’s an unusual figure among immigrant activists. Three-quarters of the nation’s unauthorized immigrants are Hispanic, along with 11% from Asia, according to a 2009 Pew Research Study. Less than 2% are from the Middle East.

The New York Legal Assistance Group, an organization that offers free legal services, has received 342 applications on behalf of Jewish undocumented immigrants. Many others apply through private attorneys.

“We know there are thousands of undocumented Jews presently residing in New York City,” said Yisroel Schulman, who founded NYLAG in 1990, adding that it works with a network of 150 Jewish, community-based organizations.

Clear data on the number of Jewish illegal immigrants in the United States is not available because most are doing what Naim did for 25 years: living in the shadows of society. 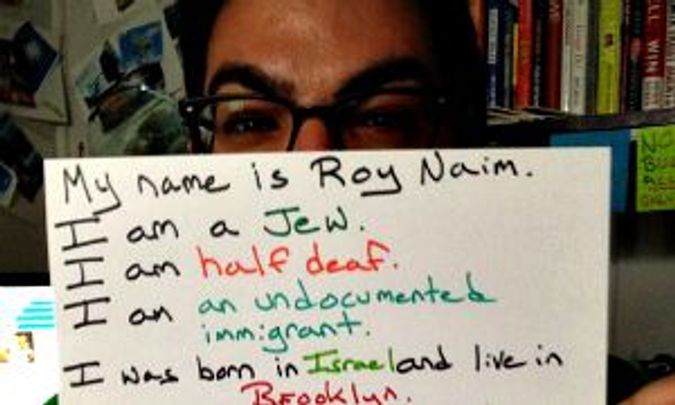 Naim’s “illegal” life began in 1988, when he was 4 years old. His family entered the United States on tourist visas and decided to stay. Growing up in Brooklyn, Naim studied in the Jewish schools that would accept him even though he was undocumented.

He could not visit his relatives back in Israel (“I’ve a hundred cousins I don’t even know,” he said). A class trip to the Canadian side of Niagara Falls was problematic. And one time, when he injured his foot playing soccer in summer camp, the hospital did not want to treat him because he lacked a Social Security number and didn’t qualify for health care benefits or have basic medical insurance.

Adult life has been even more limiting. Naim worked for a while in the not-for-profit sector, where he was paid off the books. Today he’s unemployed.

The inability to work or drive legally has left him dependent on his family, both for getting around and for supporting himself. And on top of the practical obstacles, until last year he was also living a life of invisibility, minimizing public exposure in fear of the dreaded Immigration and Customs Enforcement.

The change in Naim’s life started when he read “My Life as an Undocumented Immigrant,” a New York Times article by Jose Antonio Vargas, a Philippines-born, Pulitzer Prize winning journalist. In the article, the widely admired reporter revealed for the first time his own status as an undocumented immigrant. He told his story of entering the United States as a child, on a tourist visa, and staying illegally.

Naim identified with Vargas’s story, and also, for the first time, realized there were millions of others throughout the country who were with him in the same undocumented boat.

“It gave me hope,” Naim said in the living room of the south Brooklyn home he shares with his parents. “It gave (me) a reason to believe, a reason to stand up, a reason to go out there and speak up about who I am, about my story.”

Naim knew that his parents would not be supportive of his decision to expose himself, so he let them know about the Time magazine article — his coming-out event — a day before it was published, when it was too late for them to stop him. Naim said that his parents, who did not want to be interviewed, initially opposed his decision but became supportive when they saw how happy he was in his new role as a an activist.

The rest of Naim’s family members have already legalized their status. His brother and sister became citizens after marrying Americans. Then, the same brother applied for naturalization for Naim’s mother and father. The parents have been granted green cards, which signify permanent residency, and are awaiting citizenship.

So if anyone was to pay the consequences of exposure — possible deportation — it would be Naim, for whom that would mean going back to a society and a culture he knows little about. The former Israeli speaks only broken Hebrew with a heavy accent. He said that even though he’s spiritually connected to Israel, having to relocate to the Middle East at this point of his life seems like a foreign and crazy idea.

He also said that he’s not afraid. Naim seems to have completely bought in to the idea that going public about his undocumented status does not put him at risk.

“My being public protects me because America loves stories,” Naim said while checking Twitter on his phone. “And when we hear about a good person — a person who is nice, who cares — we don’t want him deported; we want him in this country.”

Naim was not always this confident. The process of coming out about his legal status has had a direct effect on his personality, according to Nathan Samuels, a Staten Island based attorney who has been Naim’s friend since their yeshiva days together.

“By nature he is more of an introvert, an inward person,” said Samuels. “But he has become more of an extrovert through this process.”

Samuels, 30, told the Forward that his friend’s activism has caused him to rethink the whole immigration issue.

“Personally, from my political vantage point, I lean towards the conservative side. I was never for amnesty,” said Samuels, who does not know any undocumented people other than Naim. “But when you know somebody in that situation, it definitely gives you food for thought.”

In June 2012, President Obama signed the Deferred Action for Childhood Arrivals — a temporary act protecting from deportation many undocumented immigrants who came to the United States as children. Naim said his application for DACA is on hold because of technical problems that he hopes to solve soon.

Naim believes that he Republican-controlled House of Representatives will approve a bill that is similar to the one passed with a strong majority by the Democratic-controlled Senate on June 26, one that includes a 13-year path to citizenship for undocumented immigrants. House Republicans are far from sold on the Senate’s approach, and so far House Speaker John Boehner, an Ohio Republican, has refused to bring immigration reform to a debate or a vote.

At least for now, Naim’s expectations appear to be wishful thinking.

“The House has to ask themselves two questions,” Naim said. “What type of country do we want to be known as, and are we willing to live with the concept of having second-class people in America?”

In the meantime, Naim says he is speaking out for the Jewish undocumented population, as well as for all immigrants. Even within the Jewish community, he says people tend to hide their illegal status and are forced to lead lives crippled by social and professional limitations.

“I don’t know any other Jewish undocumented people who are sharing their story like me,” Naim said. “And part of why I want to do this interview is to reach out and say: Whoever you are and wherever you are, know there’s somebody like you, that you are not alone.”

A day after the Time magazine issue was published, Naim received a message on Facebook from a Jewish teenager whom he had not known. It read: “Thank you. You gave me hope.”