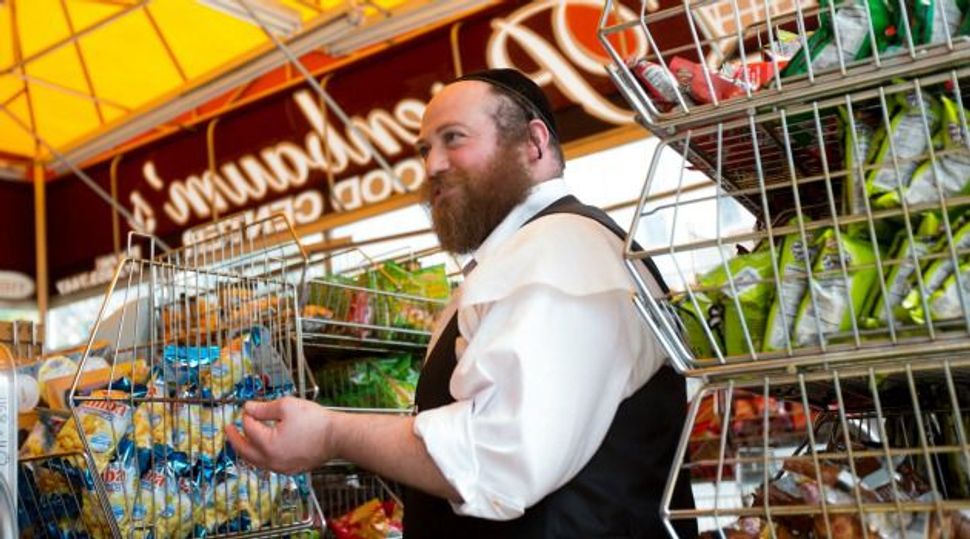 Lazer Chaim Zinger washes talleisim. His small storefront on Lee Avenue, in the Williamsburg section of Brooklyn, looks like any dry cleaner, with a row of tagged plastic-sheathed garments hanging behind the counter. In this Hasidic Jewish neighborhood, however, you have to take your long black coat somewhere else.

For $100, Zinger will hand-wash your tallis and shine its atara, the fringe of sterling studs stitched around the neck of the prayer shawl. Until last year, the father of seven ran his business from his apartment. That changed in June 2012, when Zinger opened his shop with a $25,000 interest-free loan from the Hebrew Free Loan Society.

HFLS is not part of the Hasidic community. Yet as poverty rates have risen in Orthodox Brooklyn, the 120-year-old Manhattan-based Jewish charity has lent nearly $1.6 million since 2009 to help launch small Hasidic-owned businesses.

The idea is to help ultra-Orthodox Jews find work, despite their lack of a secular education, by supporting them as they start their own companies. 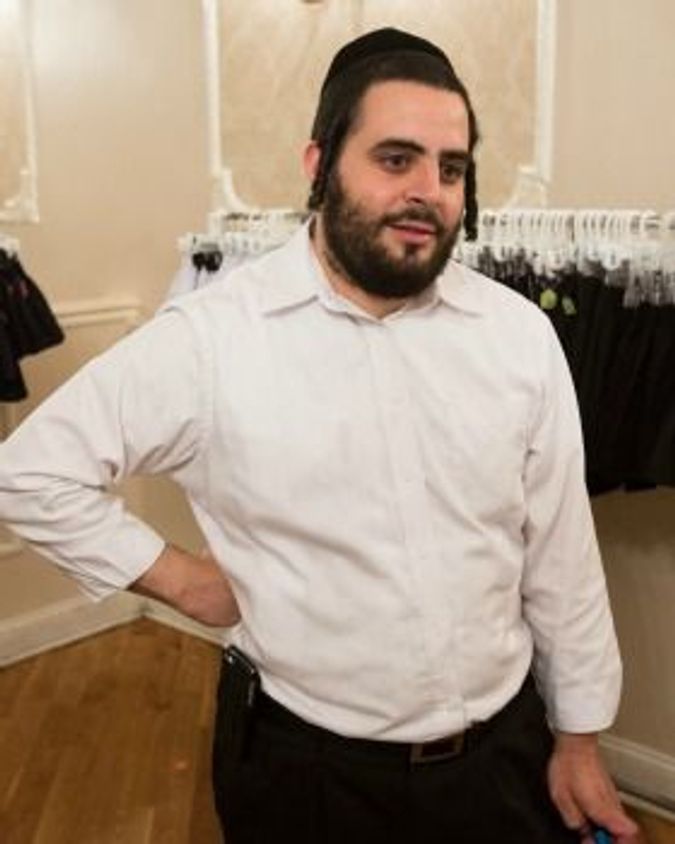 Microfinancing helped Joel Blum and his wife, Yides Blum, get her clothing business off the ground. Image by claudio papapietro

The extraordinary growth of Brooklyn’s Hasidic Jewish community came at the worst possible time in terms of New York City’s economy. There are 240,000 Hasidic Jews in the New York area today, up from a relative handful just 50 years ago. At the same time, the restructuring of the city’s economy has severely limited the job options for people without even a high school diploma.

It wasn’t always that way. As recently as the late 1990s, large numbers of Hasidic men were able to find work in Manhattan’s diamond industry. But New York diamond sellers have since outsourced their diamond cutting operations to India, and those jobs, like similar skilled work in other city industries, have disappeared.

That’s left a dearth of decently compensated employment opportunities. “Their options in terms of earning a significant salary are quite limited because of the lack of secular education,” Novick said.

Yides Blum had never been to college, never mind business school, when she cut her first deal.

Walking down an ultra-Orthodox shopping strip in Brooklyn’s Boro Park, the Hasidic mother from Williamsburg saw a man selling skirts designed for Hasidic girls. Long, dark and shapeless, Hasidic girls’ skirts are hard to find in a department store, and Hasidic mothers often scramble to fill their daughters’ wardrobes. So Blum cut a deal with the man, offering to sell his skirts on commission at a Hasidic flea market in Williamsburg.

She says that she did $10,000 worth of business over the course of a few hours.

“It was just a spur of the moment thing,” Blum said. “I was just courageous.” 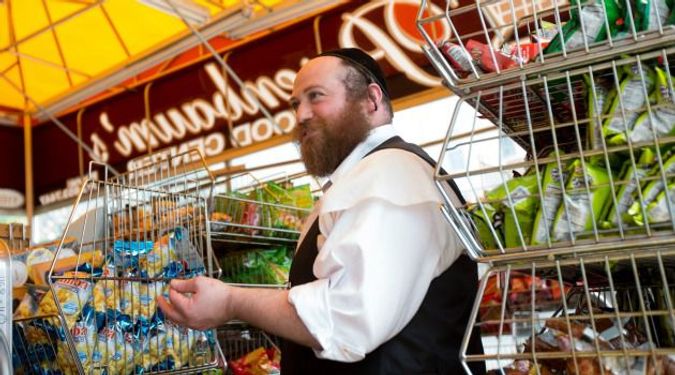 Blum’s husband, Joel, a member of the Kashau Hasidic group, works as a nurse. Her father was a diamond cutter before the diamond jobs disappeared. She herself worked at a Boro Park shoe store after graduating from a Satmar high school. Now 35 years old and a stylish mother of five, she is ambitious.

Soon after her first success selling the stranger’s garments, Blum sketched out some designs of her own, found a fabric supplier and had a run of skirts made. They sold. She was in business.

Blum’s skirts are simple. Most are gray or black with pleated fronts. At a recent show on the third floor of a Williamsburg wedding hall full of Satmar women and their toddlers, Yides Blum was displaying dozens of skirts on six or seven racks. It was the last sale before summer camp, and Blum was selling one seasonal skirt with leopard-print running down the side, a bit of flash that would never have flown at school.

Yides Blum started her business with a small loan from her family and the help of her good-natured husband, who carries her clothes racks up and down the stairs. A year ago, however, one of their children got sick, and the business suffered. Needing help, Blum found an ad in a local Orthodox newspaper, offering free business loans to the “heimishe community,” a Yiddish term connoting the Hasidim.

HFLS had placed the ad, but the copy included the name of the United Jewish Organizations of Williamsburg, a local community group run by the leadership of the Satmar Hasidic sect. Blum had never heard of HFLS, but she had heard of the UJO, and she reached out.

“That kind of opens the door for us,” said Shlomo Haft, the HFLS program officer responsible for the organization’s loans to Hasidic Jews, of the partnership with the UJO.

Haft, like the rest of the HFLS staff, is not Hasidic. Nor are the vast majority of HFLS’s financial backers. Founded in 1892 to help poor Russian Jewish immigrants establish themselves in the United States by extending interest-free credit, HFLS is today an agency of the UJA-Federation of New York.

Yet since 2008, HFLS has initiated a new focus on Hasidic businesses. The group calls it a microfinance program, an allusion to the global anti-poverty trend popularized by Muhammad Yunus and the Grameen Bank, which won a 2006 Nobel Peace Prize for their micro-lending efforts in Bangladesh.

HFLS’s program differs in important ways from the Grameen Bank: Most significantly, while most microfinance banks charge interest, HFLS does not.

HFLS, in that sense, looks less like a microfinance bank than like a gemach, the communal free loan institutions still common in Hasidic neighborhoods. Yet while the gemachs are usually relatively informal, HFLS’s process is rigorous.

When Blum applied for her $25,000 loan, she was screened by Haft, then referred to a city-run small business services agency that helped her create a business plan. Though HFLS took no collateral, borrowers have to supply two guarantors, whose credit is checked. Eventually, a board of experts approved the cash.

Haft said he screens out roughly two-thirds of applicants and that the board approves more than three-quarters of those that he recommends to them. So far the screening process has worked: There have been no defaults, though roughly half the money loaned so far is currently outstanding.

Tzvi Rosenbaum, a stocky, blue-eyed member of the Skver Hasidic community, already owned his Boro Park grocery store when he approached HFLS last summer. A former student at the Skver kollel, or graduate-level yeshiva, in Boro Park, Rosenbaum left at age 21 to work as an administrator at the elementary school summer camp of his community.

In his telling, Rosenbaum’s life has two protagonists: himself and his rebbe. “He tries to get everybody to stay by learning,” Rosenbaum said of Rabbi David Twersky, spiritual leader of the Skver Hasidim, explaining his initial reluctance to work.

Rosenbaum worked for years at the summer camp, and then at the elementary school, before finding his métier in the grocery business. Dressed in a black vest with his peyes, or sidelocks, curled tightly behind his ear, he talked excitedly about the improvements to Rosenbaum Food Center that the $25,000 loan he received from HFLS allowed him to make.

Now the store has an outdoor space to sell fruits and snacks. Rosenbaum also installed new lights. When he told the old owner about the new lights, the old owner said it was a mistake: Now customers would see the dust on his shelves.

“When he told me that, I understood why he wasn’t making money,” Rosenbaum said, standing in the back of the scrupulously scrubbed store.

Rosenbaum has plans for growth. He printed up magnets listing the types of food he sells and sent them to customers and members of the Skver community to advertise his delivery service.

Kollel students shop at his store. He says that they don’t look down on him. “I try to work alongside everything it says in the Torah,” Rosenbaum said.

Novick and Haft hope their program will expand. A similar program targeting Russian-speaking Jews is winding down, Haft said, because the immigrant generation is aging out while the children are getting professional jobs.

Among the Hasidim, however, they see room for growth. “This is what they do. They don’t go to college, they go to kollel or they open a business,” Haft said. “The problem is finding qualified candidates.”