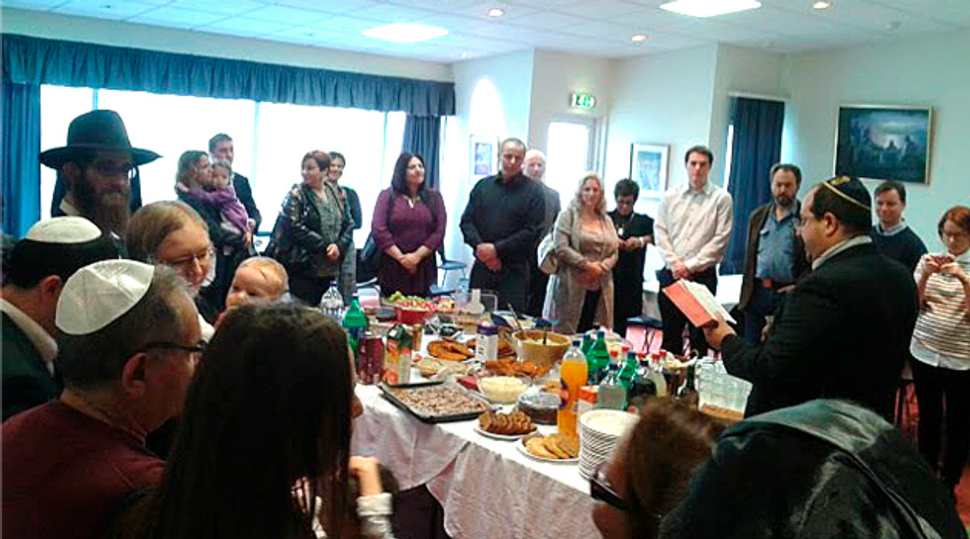 Iceland has no synagogue, no rabbis, no Jewish community center or organized structure. In fact, Judaism is not even one of Iceland’s state-recognized religions.

Still, Iceland has about 100 Jews who call this North Atlantic island home. And last year, roughly 50 of them gathered in a hall downtown on Erev Rosh Hashanah for services — a proportion of prayer attendance that rabbis in many other countries would give their left arms to achieve.

This coming Jewish New Year, traditional Ashkenazi food will be served once again. And once again, if they are lucky, attendees that night may see the aurora borealis, in all its green glory, dance across the sky, as they did on Erev Rosh Hashanah 5773.

A rabbi will also be on hand, something relatively new for Iceland. Though he remains based in the United States, Rabbi Berel Pewzner of Chabad, the Brooklyn-based Hasidic group, visits regularly and is into the third year of his tenure here. 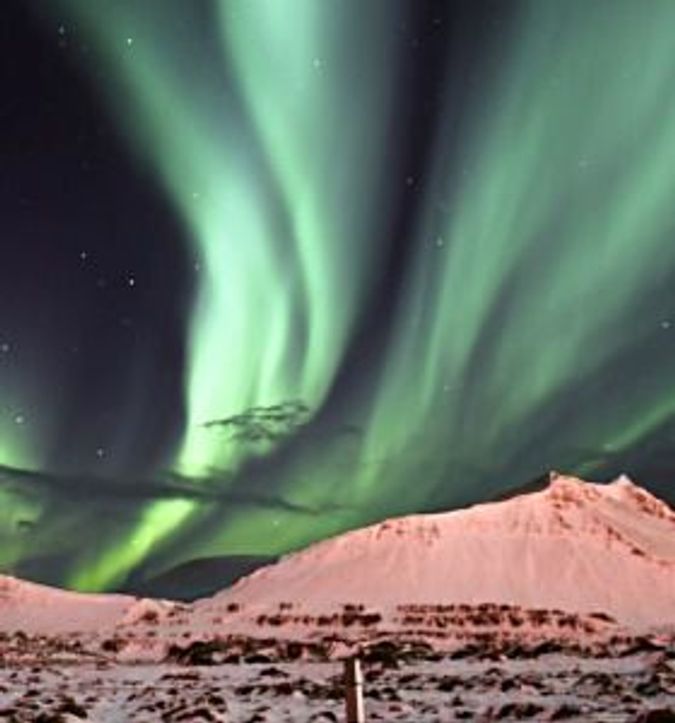 It was in 2011 that Pewzner came to Iceland to help develop the small Jewish community. He presided that year over the first kosher Passover Seder ever held in Iceland, and more than 50 people attended that event, too. The rabbi decided to return for Yom Kippur and came back again in 2012.

“I’ve always been fascinated with Jewish life in remote and unique locations around the globe,” Pewzner told the Forward. “I have traveled to quite a number of countries, with the purpose of connecting with the Jewish communities living there…. So when I came across Iceland, a country that seemed to have few Jews, but a vibrant model of modern Jewish community, I was intrigued.”

Jews are relatively new to Iceland. The first observant Jew settled in Iceland in 1906, according to records. Fritz Heymann Nathan started one of Iceland’s most successful businesses at the time, Nathan & Olsen, a food distributor, after arriving from Denmark. He stayed for 11 years before returning there.

It wasn’t until 1940 that the first Jewish congregation was established on Iceland’s soil, when Jewish soldiers from Britain were stationed there. The arrival of American forces in 1941 brought more Jews to the country, with roughly 2,000 Jewish soldiers based in Iceland by the end of World War II.

Jewish numbers fluctuated over the decades until the United States Army left Iceland in 2006.

Prior to that, Iceland’s government had a troubled history with Jews. In the 1930s, when Jews were trying to flee Germany, and Iceland was still affiliated with Denmark — though formally sovereign — the government refused to open its doors, following Denmark’s lead. Furthermore, most of the small number of Jews who were already on its shores were deported.

Today, Iceland’s Jewish community comes from around the world. There are no native Icelandic Jews to speak of. The Jews who reside in Iceland came, at least initially, to study, to work or because of marriage to an Icelander.

So, what’s it like to live in Iceland as a Jew today? Most of the Jews who reside in Iceland come from secular backgrounds, and the community’s identity does not lie in religion. Indeed, most of the Jews here today are in interfaith marriages. Many in the community, however, are interested in retaining a connection to their Jewish heritage.

“Overall my experience living here as a foreigner has been great,” Jovana Alkalaj said. “Being from Serbia and being Jewish, both somewhat controversial, have never been an issue for anyone I have met [in Iceland].”

But Alkalaj’s connection to the community is a cultural one.

“Jews in Serbia have been through a lot, including my late grandparents, and I do identify with them and what they went through,” she said. “I am a member of the Jewish community in Serbia, as well, and have taken a year’s worth of Hebrew classes. Being Jewish is more of a personal statement in honor of my family and what they went through, and a sign of identification with other people whose families suffered the same way.”

Alkalaj, who moved to Iceland in 2010, is married to an Icelander.

Roughly 80% of Iceland’s residents are members of the Lutheran Church, which is state funded, as are several smaller religious communities that have chosen to register with the government. So far, the Jewish community has chosen not to do so.

One woman who came to Iceland from America to live with her Icelandic husband, said such demographics take their toll. She and her husband have one child, who has been baptized.

“There have been some sacrifices on my part, but that is something that I had to accept when I moved to Iceland,” said the woman, who spoke only on condition of anonymity to retain her privacy. “In many ways I did lose my Jewish identity. But it was a choice.”

Others in the community do practice their Judaism, though not in a traditional sense, to keep tradition alive.

Julian Burgos, a marine biologist who grew up in Ecuador, considers himself a secular humanistic Jew. “But I do practice,” said Burgos, who has lived here for four years with his wife, a nonpracticing Catholic. “At home we celebrate the Sabbath and the holidays, albeit from a humanistic, nontheistic point of view…. The Jewish people have always also included the apikorsim, those who do not accept the dominant rabbinic religion, and I guess I am one of those.”

Like other community members, Burgos says he has never experienced anti-Semitism in Iceland. Israel, and the politics that come with it, however, is a very different issue. Politically, many Icelanders are quick to criticize the Israeli government, and Iceland’s previous government came out strongly against Israel at times.

“Many Icelanders are very upset with Israel because of the occupation of the Palestinians,” Burgos said. “Sadly, in some cases people cannot distinguish between the actions of the Israeli government or the settlers, and they blame ‘the Jews’ in general.”

During the most recent conflict in Gaza, in November 2012, Burgos said, some comments in the media and in the social networks against Israel and the Jews “were virulent.”

Össur Skarphéðinsson who at that time was minister of Foreign Affairs, criticized Israel’s military incursion into Gaza, taken after rockets from Gaza landed on Israeli soil. Skarphéðinsson called Israel’s response “tragic and unequal.” Ögmundur Jónasson, then Iceland’s minister of the Interior, opined that Icelanders should protest the attacks. And they did.

The protests took place in front of the U.S. Embassy last year, with roughly 1,000 people attending.

When confronted with such protests, Burgos himself feels conflicted. “Even though I am Jewish and I love Israel, or perhaps because of it, I am also very upset with the situation in the West Bank and Gaza, and the intransigence of the Israeli government,” he said. “At the same time, you do not see people complaining, for example, about the situation in Syria, so there is a particular focus on Israel.”

Iceland’s closest tie to Israel, however, lies in a personal relationship. In 2003, Iceland’s president, Ólafur Ragnar Grímsson, married Israel-born Dorrit Moussaieff — bringing yet one more Jew to Iceland and to an interfaith marriage with an Icelandic native. While Moussaieff is secular and has lived in London since age 13, she was born in Jerusalem’s old Bukharian Quarter and is the great-granddaughter of Shlomo Moussaieff, one of the quarter’s well-known founders. Some in the community have credited her with bringing positive publicity to Iceland’s Jewish community, though she herself has never reached out to the community directly.

Still, the tie has not necessarily helped burnish Israel’s image. During a private visit to the land of her birth in 2006, the Icelandic first lady was taken out of line at passport control and denied permission to leave the country after a three-day stay because she did not have an Israeli passport. An immigration officer refused to accept her British passport, noting that Israeli law requires all citizens to arrive and leave the country using an Israeli passport only.

According to the Israeli daily Yediot Aharonot, the president’s wife was allowed to leave only after an hour-and-a-half, culminating in a shouting match between Moussaieff and the female border patrol officer.

“This is about to become a serious diplomatic incident,” Moussaieff reportedly said. “This is why everyone hates Jews.”

In an interview afterward with Iceland’s national broadcasting authority, Moussaieff did not deny the comment. “I lost my temper,” she said. “I couldn’t say anything else…. At that point, [the immigration officer] didn’t know that I was married to Ólafur. And I said something like: ‘How can you do this to the first lady of another country? I’m not your possession.’”

The immigration officer’s response, according to Moussaieff, was: “I couldn’t care less who you are. I’ve never heard of Iceland, and the people there don’t interest me at all.”