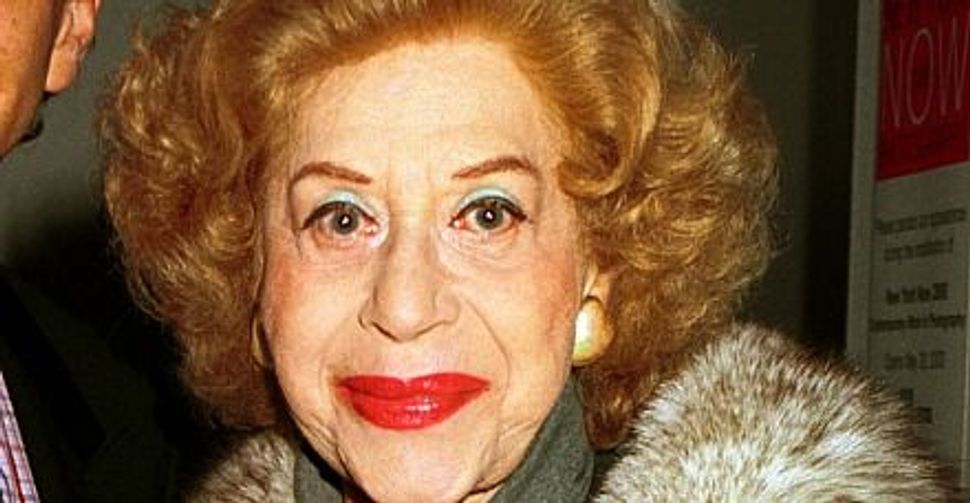 The American Jewish mezzo-soprano Regina Resnik, who died on August 8 at age 90, was admired for her high-flying dramatic delivery and stage presence in roles from Mistress Quickly in Verdi’s “Falstaff” conducted by Leonard Bernstein to the Countess in Tchaikovsky’s “Pique Dame” conducted by Mstislav Rostropovich.

In 1987, in the Kander and Ebb musical “Cabaret” on Broadway, Resnik performed the role of Fräulein Schneider, a German landlady in 1930s Berlin who becomes sensitized to Nazi anti-Semitism when her suitor Herr Schultz, a Jewish fruit vendor, is persecuted. In 1991, Resnik’s resonant performance as Madame Armfeldt in Sondheim’s “A Little Night Music” overcame memories of Hermione Gingold, the splendid British Jewish actress who originated the role.

Resnik was doubtless well aware of the contribution of Yiddishkeit to her artistry. In 2006, Resnik, born in the Bronx to a Russian Jewish family, told the journalist Warren Boroson: “I’m not a religious Jewess. I’m a cultural Jewess. I have Jewish roots up to my ears, but I wasn’t brought up to be rigid about religion… I know who I am.” When Resnik was once asked in Germany where her voice came from, she replied: “I’m Jewish, and my ancestors who came from Russia were musical.”

Yet in the early years of her career, Resnik was not among those Jewish musicians, such as tenors Richard Tucker and Jan Peerce and violinist Isaac Stern, who refused to perform after the Second World War with the Austrian conductor Herbert von Karajan, who twice joined the Nazi party, in his homeland and Germany, to advance his career. Resnik performed “Carmen” with Karajan, and also recorded her signature role of Prince Orlofsky in Johann Strauss’s “Die Fledermaus” under the two-time Nazi Party member’s guidance.

Her rapport with another former Nazi, conductor Clemens Krauss, was even more essential to her career. In 1953, after singing for over a decade as a dramatic soprano, Resnik was singing the role of Sieglinde in Wagner’s “Die Walküre” at Bayreuth under Krauss’s direction when he suggested that her voice was a mezzo-soprano, which indeed turned out to be her musical destiny.

Despite these early associations, marriage in 1970 to the Lithuanian Jewish artist Arbit Blatas (1908–1999, born Neemija Arbitblatas) doubtless made her more sensitive to Jewish tradition as well as the tragic fate of European Jewry. Blatas, a friend of fellow Jewish artists Chaim Soutine and Jacques Lipchitz in prewar Paris, fled Nazi-occupied France in 1941. Blatas’ mother was murdered in the Stutthof concentration camp while his father survived imprisonment in Dachau, but died soon after the war. Blatas’ paintings are vivacious, celebratory, and life-enhancing homages to friends such as the French Jewish mime Marcel Marceau (born Marcel Mangel) and the composer Kurt Weill’s “Threepenny Opera.” Yet he also produced a series of stark sculpted Holocaust memorials.

Since 1973, a part-time resident with Resnik of La Giudecca, an island in the Venetian Lagoon, Blatas installed his somber bronze artworks in Venice, as well as Paris, New York (at Hebrew Union College), and Kaunas, Lithuania. In the early 1980s, inspired by Blatas, Resnik created a documentary, “Geto: The Historic Ghetto of Venice.” More recently, Resnik worked with Michael Philip Davis, her son from an earlier marriage, on “Colors of Diaspora: A Kaleidoscope of Jewish Classical Song,” a series of concert performances by a team of musicians, filmed and released on DVD from Video Artists International.. Surely this flowering of self-awareness of Yiddishkeit owed something to Resnik’s long and happy marriage with the talented artist Blatas.

Check out Regina Resnik guest-starring on “The Goldbergs” TV show in 1954, below: