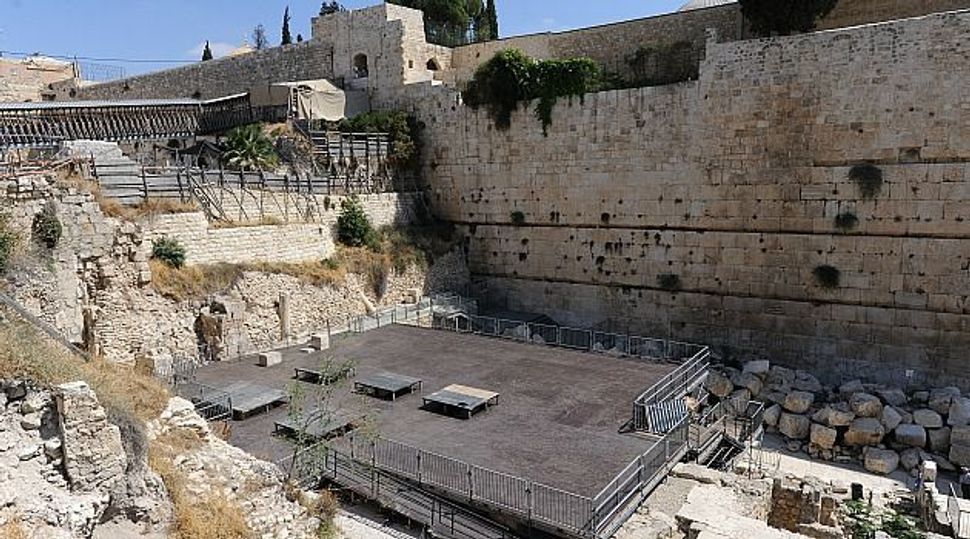 For more than a decade, Jews have been permitted to hold egalitarian prayer services at a southern section of the Western Wall that lies out of sight of Orthodox worshippers. But the area, known as Robinson’s Arch in the Jerusalem Archaeological Park, never became a government-supported prayer facility. Worshippers have always been guests of the archaeological site, often having to pay entrance fees. Hours were limited, and the state did not provide amenities such as prayer books.

All that changed on August 25, when, after just two weeks of construction, the government completed a 4,840-square-foot concourse in the archaeological park and promised that it would stay open 24/7 for non-Orthodox mixed-gender prayer, accessible without charge. The state will provide prayer books and other religious objects.

“For the first time since the liberation of the Kotel in 1967, all Jews are now able to pray in a respectable place at one of Judaism’s holiest sites,” Naftali Bennett, minister of Jerusalem and Diaspora affairs, told the Forward. “This is aimed at unifying the Jewish people and enabling all Jews from all walks of life to pray freely at the Kotel.”

Bennett’s unexpected announcement received decidedly mixed responses in the United States and Israel. Natan Sharansky, who as chairman of the Jewish Agency for Israel has promoted his own bold plan for equal, egalitarian prayer at the Kotel, welcomed the development. Leaders of the Reform and Conservative movements offered tepid, tentative approval. And far from rejoicing, the Women of the Wall, the group that has led the fight for women’s prayer at the Kotel, reacted furiously to the development and staged a 24-hour sit-in at the Wall in protest.

Women of the Wall’s anger stems in part from the government’s declared intention to use the opening of the new facility to cement Orthodox control of the main part of the Wall, with Bennett’s office saying that it will receive “official recognition” as exclusively Orthodox.

If and when this happens, Women of the Wall will probably fall through the cracks of the new arrangement. Although the group promotes women-only prayer (whereas prayer on the new platform will be mixed), it diverges from conventional Orthodox practice in demanding that women be able to wear prayer garments and read from the Torah at the Kotel — actions that recently have landed some of its members in jail.

The group cites further concerns about the interim plan, likening it to a “sun deck” and complaining that it isn’t equal in size or status to the main Orthodox-controlled prayer section. The new platform is accessed not from the main Kotel plaza but through the archaeological park entrance. The flooring is more basic than the stone flooring at the plaza; it is lower down than the plaza; it isn’t close enough to the Wall to allow worshippers to touch it, and it faces a section of the Wall excavated in the 19th century, not the stones that have been visited for centuries.

“The plaza is made of ancient rock and makes you feel you are in the footsteps of your ancestors, but the sundeck feels like a sundeck,” Anat Hoffman, Women of the Wall’s chairwoman, said shortly after completing her sit-in.

As far as Bennett’s office is concerned, Women of the Wall’s reaction is misplaced, as the new concourse is only part of what non-Orthodox Jewry will receive in a permanent Kotel plan. Bennett calls it an “interim” step for a period of time expected to be quantified in a government report in September, in which Cabinet secretary Avichai Mandelblit, working with Sharansky, devises and implements a final arrangement.

“This is one step and is part of a larger plan to create a permanent prayer plaza for pluralistic and egalitarian services at the Kotel,” Bennett said. “We are continuing to promote those plans but wanted there to be a solution already now ahead of the Jewish holiday season.”

Though Sharansky has welcomed the new concourse, Hoffman and others worry that it will inevitably morph into a permanent arrangement and that Sharansky’s proposal — for an egalitarian prayer section equal in size and status to the Orthodox section and accessed from a joint plaza — will be dropped because of the opposition that has come from the ultra-Orthodox who now control the Kotel.

“We were given a glimpse of a Promised Land,” she said. “The vision of Sharansky really is a vision of tolerance, pluralism and mutual respect. It was a good plan, and then the bullies won.”

Women of the Wall’s longtime allies, the Reform and Conservative movements, don’t share Hoffman’s pessimism. “We need to tell the Jewish world: ‘Don’t get too excited about this plan. It doesn’t prevent any advancement, and it’s not a breakthrough,’” said Gilad Kariv, executive director of the Israel Movement for Reform and Progressive Judaism. He is reserving judgment until the government’s intentions for the long term become clear.

A spokesman for Israel’s Conservative movement expressed some frustration at the extent to which Women of the Wall is dominating the discourse. “The Women of the Wall meet about a dozen times a year, while in 2012 we had about 740 minyanim [at Robinson’s Arch],” said Andrew Sacks, director of the Conservative Religious Affairs Bureau, in an interview.

Sacks described Bennett’s interim arrangement as “truly wonderful,” a “positive step” and a breakthrough for the status of non-Orthodox worship. He said he is hopeful that the interim arrangement will lead to further concessions to the non-Orthodox in the long-term government plan, and argued that the area around Robinson’s Arch is as important as the main section of the Kotel.

“Over the centuries most of the yearning and thoughts were directed to the section that was exposed, but historically and archaeologically there was no difference between the areas,” Sacks said. He downplayed the significance of the fact that worshippers cannot touch the stones from the new concourse, as they can touch the stones from other areas within the archaeological park.

“We see this as going a long way towards meeting our needs,” Sacks said.