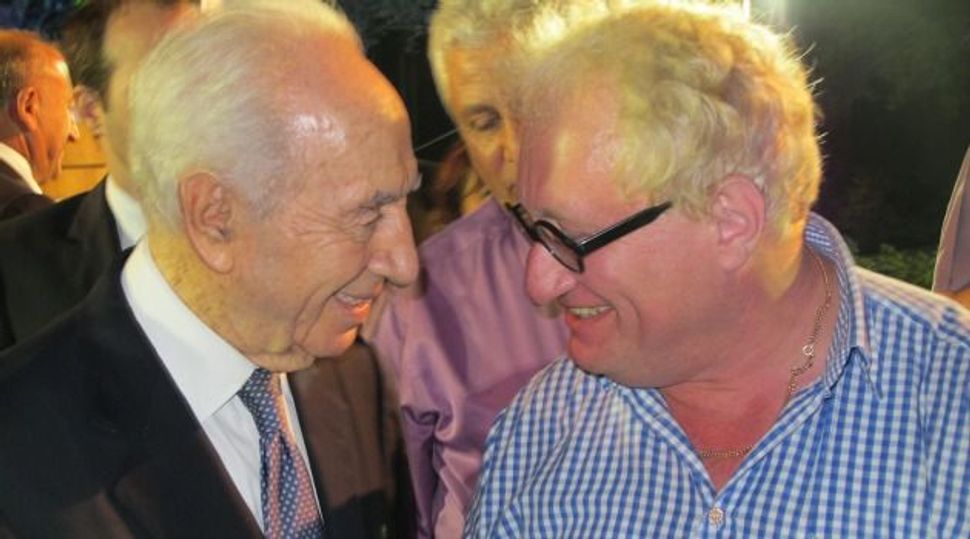 Following a night in Ramallah when I joined the Muslims for Iftar, the dinner meal for breaking the fast on Ramadan, I got into a van that goes to Jerusalem.

Two ladies with the most gorgeous hijabs sat next to me. I looked at them and noticed that Palestinian hijabs are very well made. Much nicer than the hijabs I saw in Turkey. Really. I don’t know if it’s politically correct to say it, but between you and me, these hijab-wearing Palestinian ladies are very, very sexy.

And the next morning, once I woke up, I read my iPad.

Arabs read the Quran, Jews read their Bible, I read the iPad.

My iPad informed me of something quite interesting. “President Shimon Peres,” the announcement said, will host at his residence “an Iftar dinner to break the Ramadan fast. The dinner will be attended by leading Muslim figures from within Israel, including imams, community leaders, ambassadors, heads of municipalities, national service volunteers and social activists.”

Naturally, a man such as I must mingle with leading Muslim figures foreign ambassadors. And so, and at the allotted time, I made my way to the president’s house. At the entrance, pictures of Barack Obama hang proudly on the wall. I don’t know if Obama hangs Peres’s pictures on his wall, and I wrote a note for myself to visit the White House once I’m back in the States so that I can find out.

Once we were at the dining area, an official told us that the breaking of the fast would take place at exactly 7:41 p.m. I was reminded of Orthodox Jews counting the moments for the end of the fast on Yom Kippur. Of course, this was the residence of Israel’s president, and we were talking Ramadan.

I looked around for the best table at which to sit. To my left was a table with old people; to my right was a table with army commanders — or at least this is what I thought they were: a group of healthy-looking men wearing uniforms with pieces of shiny metal on their shoulders.

Should I sit with the muscled men or with the wise?

Don’t ask me why I think old men are wise; this is something I was taught when I was a baby, and somehow it never left my brain.

Interfering with my thought process was a sudden, new development: A qadi decreed that Iftar in Jerusalem is at 7:49 p.m.

At 7:49 we were permitted to eat. I made up my mind to sit with the commanders. Wise is good, but mighty is better.

I could have joined the press table, but journalists sometimes bore me. Especially these days, when they are obsessing on the issue of peace talks between Israelis and Palestinians, they pretend to know everything and push their own political beliefs on reality. In truth, they know as much as everybody does, which is nothing, but they will never admit it.

Peres, of course, is different. He seems to know what the rest of us don’t.

“I know,” he said as he spoke about the peace talks, that “there are people who say nothing will come out of it, but I say it will.” And then he added: “I want to praise the two leaders who decided to renew talks: my friend Mahmoud Abbas… and the prime minister of Israel.”

Interesting that he reserves the “friend” title just for the Palestinian leader.

“We are all adults here,” Peres said as he continued, “and I know that there will be times of hardships… but we have no other alternative to peace… All of us were created in the image of Elokim.”

He used the Orthodox term for God: Not Elohim, but Elokim. Why? God knows.

Peres talked a bit more, and by the time he stopped, I started a little conversation with the big shots at my table.

How big are they?

I asked them, and they told me. To my left was a doctor in the security jail of Megiddo. Next to him was a “mayor” of a small village. The others seemed pretty much the same to me and, with one exception, everybody at the table was Circassian, not Arab. The one Arab there, a man dressed in civilian clothes, was a computer security specialist.

I exchanged a few words with him.

“Are Arabs and Jews getting along in this country?” I asked.

I assumed he was kidding. There were leading Muslims there, though not at the table, and if Arabs and Jews didn’t get along, why were they there?

Shamefully enough, I couldn’t recognize the important leaders here, and I asked people to point out to me the leading Muslims and the ambassadors. They couldn’t. If there were any “leading Muslim figures” there, they must have been the Circassians at my table.

I mingled with the crowd a bit more, just to make sure I didn’t get this wrong.

I approached a young man wearing a suit; he looked really important.

“I came to make peace,” he said, admonishing me, “but got stopped at a checkpoint.”

I figured this guy must be either a self-deluded man or a stand-up comedian, though he might be both. When I asked him, he told me he is “the only Arab comedian.”

I walked back to my table and talked again with the computer specialist.

“Is life really so bad here?”

“What would you do if I proved to you that they wanted you to stay?”

“Leave this country on the first plane going out!”

Some of the tables remained empty. Apparently the president couldn’t find enough people to come. I feel bad for Shimon Peres, who must have tried hard to make this an important evening, and so I walked over to him and told him that he spoke well. A kind word never killed anybody, my teachers once taught me.

What I do know is this: Tomorrow I’m going to Ramallah again.

Sorry to say it, but the food here is not as good as in Ramallah.

Tuvia Tenenbom is the founding artistic director of the Jewish Theater of New York and the author of “I Sleep in Hitler’s Room: An American Jew Visits Germany” (Jewish theater of New York, 2011). He is currently working on his follow-up book in Israel, where he files occasional reports for the Forward.