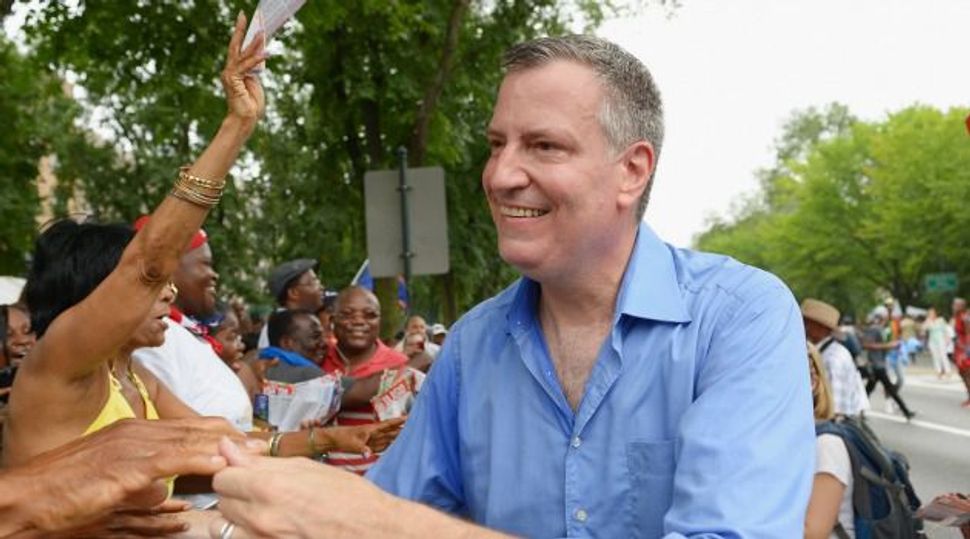 Satmar vs. Satmar: New York mayoral candidate Bill de Blasio, shown here campaigning at the West Indian carnival in Brooklyn, has won the endorsement of a group of Satmar Hasidic Jews. That sets up a battle for the votes of the Hasidic community, as another group has endorsed Bill Thompson. Image by getty images

The political leaders of half of Brooklyn’s Satmar Hasidic community announced they would back New York City Democratic mayoral frontrunner Bill de Blasio today, setting the stage for an epic get-out-the-vote showdown in Williamsburg next week.

“All in all we felt it’s a no-brainer, the shidduch between him and us,” said Isaac Sofer, a leader in the Satmar group led by Rabbi Aaron Teitelbuam. Sofer cited de Blasio’s support for aid to private religious schools as among the reasons for his sect’s endorsement of de Blasio.

The de Blasio campaign confirmed the endorsement in a statement released to the [New York Observer]( (http://politicker.com/2013/09/bill-de-blasio-nabs-a-satmar-sect/ ‘New York Observer’). The followers of Rabbi Zalman Teitelbaum, the larger Satmar group in Brooklyn, announced on August 27 that they would support Democratic mayoral candidate Bill Thompson.

The two halves of Satmar have struggled to demonstrate their influence since the sect split amidst a succession feud in 2006. The competing endorsements mean that power of Satmar leaders from both factions will be tested during the mayoral primary on September 10. The de Blasio endorsement is an opportunity for leaders of the Aroni faction, which is seen as weaker, to demonstrate their political muscle.

Rabbi Moshe Dovid Niederman, a political leader among the so-called Zalis and the executive director of the not-for-profit United Jewish Organizations of Williamsburg, told Thompson at an endorsement event that he could deliver 11,000 votes — a number some suggested was a bit optimistic.

Sofer projected that the Aronis could wrangle 7,500 votes from Satmar Hasidim in Boro Park and Williamsburg.

The split on the mayor’s race between the Satmar factions mirrors a broader lack of consensus among Brooklyn’s Orthodox on a mayoral pick. Thompson, de Blasio, and Christine Quinn all enjoy significant Orthodox support.

De Blasio also received an endorsement on September 2 from some leaders within the ultra-Orthodox umbrella group Agudath Israel. Other leaders from the group have backed Thompson.