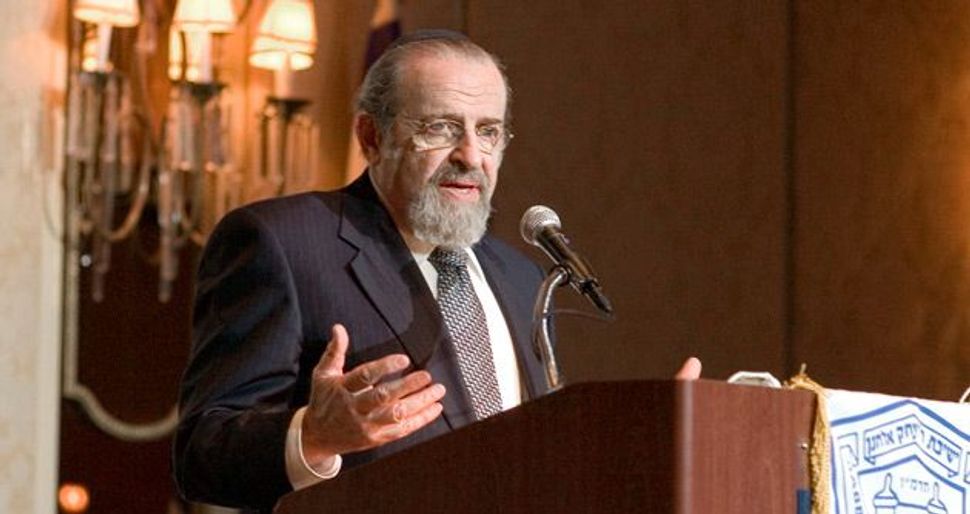 When Rabbi Norman Lamm retired as chancellor of Yeshiva University in July, many people rued the fact that his distinguished career had been tarnished by his own admission, last December, that he mishandled allegations of physical and sexual abuse while he was president of Y.U.

Now, Lamm’s mental health is being dragged into the limelight as lawyers on both sides of a $380 million lawsuit argue publicly about whether, at 85, he is competent to testify. The arguments come at a time of conflicting accounts of Lamm’s mental health.

His friends and family say his mind has been deteriorating for months, if not years. Others point out that Lamm stepped down as Y.U. chancellor — where his total compensation was about $500,000 a year — only this past July and that his retirement letter was eloquent and lucid.

The arguments also raise medical and ethical issues. How easy is it to establish a person’s mental acuity? And if a person is suffering from dementia, at what stage does his or her testimony become unreliable?

The judge in this case has to balance many competing issues in making this decision.

Asher Aladjem, clinical associate professor of psychiatry at NYU School of Medicine, said that a diagnosis of dementia does not preclude someone from performing certain tasks, such as looking after children, consenting to complicated surgery or testifying at a trial.

“People with severe dementia are able to remember what happened 50 years ago but not what they had for breakfast, or if they had breakfast at all,” Aladjem said.

But Lamm’s lawyer, Joel Cohen, said that Lamm was unfit to testify during a pretrial hearing in U.S. District Court, in Manhattan, on September 9.

The hearing was an early stage in a lawsuit filed by 34 former students of Yeshiva University’s Manhattan High School for Boys who say they were physically and sexually abused during the 1970s and ’80s, when Lamm was in charge.

Lawyers for both sides are expected to argue about whether the case ought to be dismissed over the next few months. In the meantime, lawyers for the former students say they want to interview Lamm as soon as possible, in case his mental health deteriorates.

Cohen said it is already too late. He said that Lamm’s physician and a forensic neuropsychologist from Weill Cornell Medical College examined Lamm and determined that his testimony would be “significantly impaired by cognitive impairment.”

Judge John Koeltl ordered an independent evaluation of Lamm’s mental health, to be performed as early as the week of September 16.

Robert Green, an associate professor of medicine at Harvard Medical School, said that doctors can accurately determine a person’s level of mental impairment by running a battery of tests that can take up to six hours.

Green said that for a person to be deemed legally incompetent, his or her level of mental impairment would have to be quite advanced. But there is a middle ground. “If the impairment is mild, it can become a question of judgment… as to whether the degree of impairment is sufficient to consider them, in a legal sense, incompetent,” Green said.

Green added that the question of a person’s mental competency becomes more subjective when doctors weigh a person’s ability to perform certain functions, such as taking part in clinical trials or filing taxes.

“We face this with people gradually going downhill,” Green said. “Some things are retained and some lost. [They have] good days and bad days. And we try to make an estimate of what they are competent to do and not competent to do.”

Aladjem, who is co-chair of the ethics committee at Bellevue Hospital, said that people with dementia are more vulnerable.

Depending upon the severity of mental impairment, they may have a hard time managing emotions or reliving stressful events. They may also confuse time sequences. But, Aladjem added, “There are very few cases where people with dementia make things up.”

Nancy Dubler, consultant for ethics at New York City Health and Hospitals Corporation, said that if a person’s memory and judgment are impaired, his or her testimony could be “questionable in terms of how far it reflected reality and how far it reflected a kernel of reality.”

Nevertheless, Dubler, who is a professor emerita at Y.U.’s Albert Einstein College of Medicine and who also trained as a lawyer at Harvard Law School, said, “It would seem prudent to depose someone whose mental health was at risk of deterioration” in case that person were no longer able to testify in the future.

Dubler said that such testimony could be sealed until a relevant time, or destroyed if the case is dismissed. If the case proceeds and testimony is used, Dubler said, “then the attorneys on both sides can fight over the importance of the deposition.”

Lamm, perhaps the most revered living rabbi in Modern Orthodox Judaism, was president of Y.U. from 1976 to 2003, a period when dozens of students at Y.U.-run institutions are believed to have been abused.

In his 2,500-word retirement letter, which he said was written with the help of relatives, Lamm apologized for his failure to go to police with reports of abuse against students.

“I understand better today than I did then that sometimes, when you think you are doing good, your actions do not measure up,” he wrote.

In an interview with the Forward last December, Lamm said that during his tenure as president, charges of “improper sexual activity” were made against staff “not only at [Y.U.’s] high school and college, but also in [the] graduate school. Lamm said that he dealt with credible allegations of improper behavior against staff by quietly allowing them to leave and find jobs elsewhere.

His assertion appears to have been backed up by Y.U.’s own investigation, which was carried out by the law firm of Sullivan & Cromwell. Investigators spent eight months conducting more than 145 interviews with current and former staff and students and sifting through tens of thousands of documents.

A subsequent report published in August, found that in addition to the Manhattan boys high school, “sexual and physical abuse took place at other schools comprising the University as well.” The report noted that until 2001, “there were multiple instances in which the University either failed to appropriately act to protect the safety of its students or did not respond to the allegations at all.”

But Cohen said that he had personally interviewed Lamm about “significant facts” related to the claims of abuse at Y.U. and that on two occasions, Lamm had answered incorrectly, including one fact “that occurred a few months ago.”

In ordering the independent evaluation of Lamm’s mental health, Koeltl said that he wanted to make sure that Lamm’s testimony would be reliable and that being deposed would not traumatize Lamm or “bring on untoward medical consequences.”

Koeltl added that if the independent evaluation finds that Lamm is in a fit mental state to give testimony, he would be “inclined to grant the request” to depose Lamm as soon as possible.