Jews Loved Bloomberg, But Most Backed His Strongest Critic 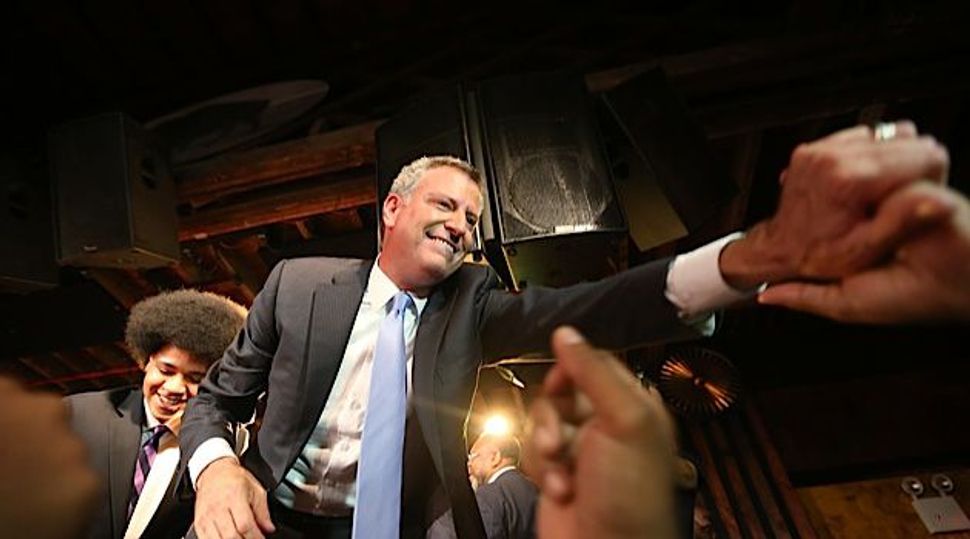 Exit polls show that Jews rejected Bloomberg’s perceived successor in the recent primary election, joining instead with city Democrats to back Bill de Blasio, the candidate who assailed economic inequality as he railed against the three-term mayor.

Jewish voters’ rejection of Christine Quinn, the Democratic hopeful closest to Bloomberg, came even as polls continued to show the mayor enjoying high approval ratings among Jews. Yet very few of the Jewish Democrats who turned out on September 10 voted for Quinn.

According to the citywide exit poll from Edison Research, a plurality of 38% of Jews voted for de Blasio; just 19% voted for Quinn.

The show of force by Jewish liberals could signal a shift in priorities for the city’s Jewish Democrats, many of whom have supported Bloomberg, a Republican, in recent elections. Yet some experts expect Republican mayoral nominee Joe Lhota to pull heavy Jewish support in the general election.

“Quinn and anybody attached to the Bloomberg legacy is a victim of Bloomberg’s success, because he’s done so well for this city and this city is in such good place,” said Michael Tobman, a Democratic political consultant, explaining de Blasio’s appeal to liberals. “I believe voters are of the opinion that it can’t be unwound.”

De Blasio received slightly more than 40% of the primary vote, seemingly enough to push him over the threshold that would allow him to skip a runoff election. Recounts and paper ballots could still bring down that percentage, forcing a runoff October 1 between de Blasio and Bill Thompson, the former New York City comptroller, who came in second. The general election will take place November 5.

Turnout in the Democratic primary was low, and the Jewish neighborhood in which de Blasio appears to have done best is Manhattan’s staunchly liberal — and relatively affluent — Upper West Side. The de Blasio tide there bucked a push from many of the district’s prominent Jewish activists on behalf of Quinn, whose Upper West Side supporters included Ruth Messinger, the former Democratic mayoral candidate and current leader of American Jewish World Service.

“I think that the Jews who did not vote for de Blasio are going to vote for Lhota in the fall,” said Hank Sheinkopf, a conservative Democratic political consultant. “And there’s a lot of them.”

During his tenure, Bloomberg, a Jewish billionaire who was first elected mayor in 2001 with roughly half the Jewish vote, emphasized public health, public safety and livability initiatives. Crime levels continued to drop drastically, smoking was banned in city restaurants, and new parks funded by public-private partnerships opened along waterfronts in Brooklyn and Manhattan.

Income inequality, however, grew under Bloomberg, and conflagrations like the Occupy Wall Street protest tagged the economic gap to the billionaire mayor. Yet in interviews, the issue of income inequality was one Bloomberg himself largely dismissed.

Jewish voters in New York continue to like Bloomberg far more than the general public. According to an NBC 4 NY/WSJ/Marist Poll released September 9, 64% of New York City Jewish voters think Bloomberg is doing an “excellent” or “good” job, compared with 45% of registered voters overall.

Jews are “substantially more satisfied with the performance of the mayor, no doubt about that,” said Lee Miringoff, director of the Marist Poll. “Even for a smaller group, that’s a fairly wide disparity.”

Those positive feelings toward Bloomberg, however, didn’t translate to support for Quinn on primary day.

While the Marist Poll had Quinn and de Blasio closely matched among Jews just days before the election, exit polls showed that Jews heavily favored de Blasio. Even Thompson outperformed Quinn among Jews, with 23% of the Jewish vote.

In the end, Quinn’s failure to attract Jewish fans of Bloomberg may have come from her effort to carefully calibrate some distance between herself and the mayor during the campaign on controversial issues, like stop-and-frisk and paid sick leave for workers.

Messinger, who lost her own mayoral bid to Rudolph Giuliani in 1997, said Democrats who liked Bloomberg felt as though there was no one for them to vote for. “People who really liked Bloomberg and the Bloomberg years didn’t really see anybody as his successor,” Messinger said.

Bloomberg received 75% of the Jewish vote in the last mayoral election, in 2009. That’s part of a pattern that reaches back to 1993, when Giuliani got two-thirds of the Jewish vote against incumbent Democratic mayor David Dinkins.

One Jewish activist said that he had been contacted prior to the September 10 primary by people whom he described as Upper West Side Jewish leaders who were registered as Democrats and said they were looking to vote for the weakest Democrat against Lhota.

Outside one polling site on the Upper West Side, Jewish Democrats voiced dissatisfaction with their party’s candidates and said they were open to voting for a Republican in November.

The polling site, in a public school around the corner from Barnes & Noble on West 83rd Street, is where you would vote if you lived at Zabar’s. It’s the heart of the Upper West Side, an increasingly wealthy neighborhood full of Jews and liberals.

In Brooklyn, Orthodox voting blocs were divided between Thompson and de Blasio heading into the primary.

Speaking on September 10 before voting results were available, Abraham Biderman, a member of the board of the ultra-Orthodox umbrella group Agudath Israel of America and a Thompson supporter, said he thought it unlikely that the Orthodox community would switch its support to Lhota in the general election — so long as Lhota trailed the Democrat.

“They’re not going to go to a loser,” Biderman said.

Jews Loved Bloomberg, But Most Backed His Strongest Critic