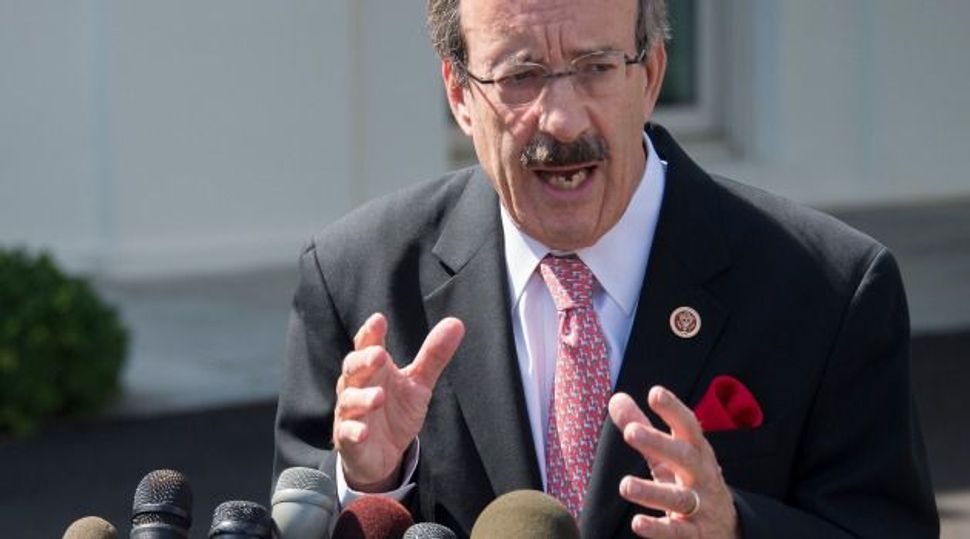 As Congress considers the Obama administration’s request to use military force against Syria, many Jewish lawmakers have nestled in the comfort of the “undecided” column, waiting until the last minute before taking a stand on an issue that offers little political gain.

But for two Jewish members of Congress, the fierce debate over how to respond to the use of banned chemical weapons in Syria has been an opportunity to take the lead on a matter they feel passionately about — albeit from opposing sides.

New York Democrat Eliot Engel, a hawkish lawmaker who has been known to take positions critical of the administration on issues relating to Israel, was one of the first congressmen to back a strike on Syria and has spent much of his time since the August 21 chemical attack rounding up votes in favor of military intervention.

Alan Grayson, a Democrat from Florida who won back his congressional seat last year, has become a household name since the Syria crisis began, shuttling between TV studios and making the progressive case against an American attack overseas.

Interestingly, both Engel and Grayson have been historically close to the American Israel Public Affairs Committee, the mainstream Israel lobby, which strongly supports the president’s push to bomb Syria. And both find Jewish roots and reasons to support their opposing positions.

“My Jewish values guide my way,” Grayson said in an interview, stressing that a military strike on Syria would “not make America safer and will not make Israel safer.”

Engel, on the other hand, cited his background as one of the reasons for backing the use of force against Assad. “Maybe I’m more sensitized because I’m Jewish and I feel the need to act when I see children being gassed and being killed,” he said.

Engel credits himself with being among the first to speak out on the need to punish Syria. A day after the August 21 chemical attack that left 1,400 dead, Engel wrote to President Obama calling for the launch of airstrikes against Assad because he had crossed the red line set by the administration regarding the use of these weapons. The call came early on, before the White House even began discussing publicly a military option, and before the president began to make the case for a punitive strike.

“I didn’t want to play games,” Engel said in a September 10 interview. “I know that there are those who don’t want to come out before they know where the wind is blowing, but for me it was a very easy choice.”

Engel serves as the ranking Democrat on the House Foreign Affairs Committee, a position he won after an internal political battle with California’s Brad Sherman following the 2012 elections. TV viewers might recognize Engel as the congressman who is always in the front row of greeters, shaking hands with the president as he enters Congress for his annual State of the Union speech. It is a tradition Engel has upheld since he was first elected, in 1989.

Climbing to the top Democratic spot in the House Committee on Foreign Affairs has put Engel in the spotlight as one of his party’s most prominent foreign policy voices. But while his predecessor in that position, former congressman Howard Berman, was known for his mainstream foreign policy views and for leaving hardly any daylight between himself and the Obama administration, Engel tends to be critical of the White House when it comes to the Middle East.

On issues relating to Israel, Engel is markedly to the right of most Democrats. He is a co-founder of the Congressional Israel Allies Caucus, a group whose leader, Israel’s former Knesset member Benny Elon, explicitly opposes a two-state solution to the Israeli-Palestinian conflict. Engel has been a vocal critic of the Palestinian Authority and has praised former president George W. Bush for his support for Israel and for standing up to the Palestinians. During Obama’s first term in office, Engel was among his toughest critics, speaking out against the president’s call for a settlement freeze and against what he viewed as pressuring Israeli Prime Minister Benjamin Netanyahu.

These views, while uncommon for a Democratic politician, have been welcomed by Engel’s constituents, in a congressional district that includes parts of the Bronx and Westchester County, both of which have a substantial Jewish Orthodox population.

He is aware of the fact that aligning with Obama this time, on a controversial issue that has split the nation, entails political risks even as Obama has put off the scheduled Congressional vote. “I’m a big boy, and I’ve been in Congress for 25 years already,” the 13-term congressman said. “This won’t be the first unpopular vote I’ve taken.” But with the risks come potential rewards for Engel, as he finds himself fighting the president’s war in Congress in what could be the start of a new friendship with the Obama White House.

On the other end of the Jewish Democratic political spectrum, Grayson faces the opposite challenge. A critic of the administration’s foreign policy from the left, Grayson is emerging from the Syrian debate distanced from the president, but with strong credentials in progressive political circles. 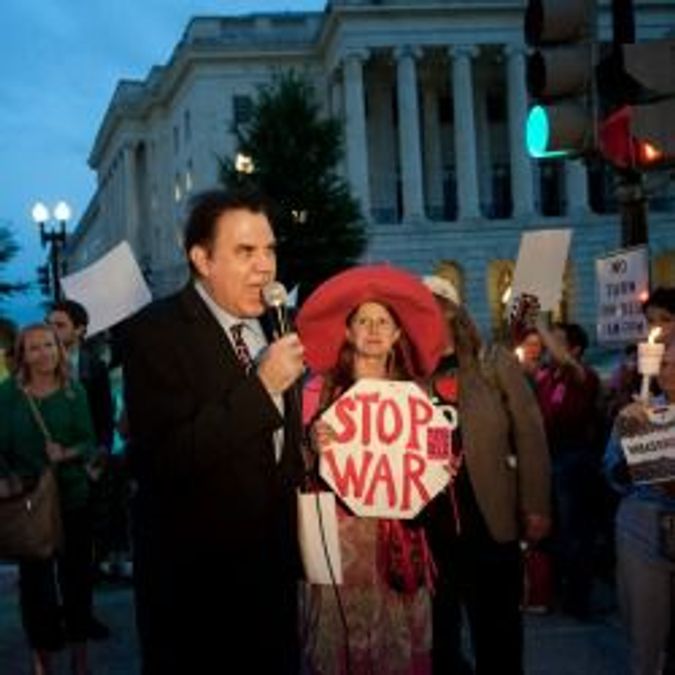 U.S. Rep Alan Grayson of Florida, is against the military strikes. Image by Getty Images

Grayson, representing a Florida district that includes the city of Orlando, served one term in Congress before losing his seat in the 2010 Republican tidal wave that swept many Democratic newcomers. He came back to reclaim his seat in 2012 and has since served on the House Foreign Affairs subcommittee on the Middle East. Its been a fruitful year for Grayson, who chairs the Congressional Progressive Caucus PAC and who in August was ranked by Slate as the most effective lawmaker, thanks to his success in passing more amendments than any other member.

On Syria, Grayson initially stood out among the anti-war members because he questioned not just the wisdom of launching a military strike against the Assad regime, but also the validity of the claims that the Syrian president indeed used chemical weapons against his own people. In a September 10 interview, Grayson made clear that he is convinced there the Syrian regime used chemical weapons, but he stressed that there is no evidence that Assad ordered the attack.

“I’m saying what many others think but almost no one else has the courage to say,” Grayson said about his newly achieved unofficial position as leader of the opposition to Obama on Syria. His goal, he said, is not only to mobilize the opposition to an attack, but also to show the administration “the vehemence of this opposition.”

Though he represents a central Florida district with many conservative and evangelical voters, Grayson has campaigned and voted on a strictly liberal platform. He has made a name for himself not only as an outspoken critic of the Iraq and Afghanistan wars, but also as a Democrat who does not shy away from a good political fight. Grayson is known for taking to the airways time and again to blast conservative pundits. He famously attacked Republican critics of Obama’s health care reform as supporting a policy stating that sick people should just “die quickly.”

On September 10 Grayson hosted a visit by AIPAC activists in his office. The AIPAC members tried to convince Grayson about the necessity of approving a military strike against Syria, but the Florida congressman believes that Israel would in fact be in danger if Congress were to approve the strike.

“Assad and his father have been in power for 40 years, and this is the first time the government of Israel had to supply gas masks to its citizens for fear of a Syrian chemical attack,” he told the Forward.

Grayson also argued that a military strike would degrade Assad’s control over chemical weapons. This would only increase the risk to Israel from these weapons, which could find their way into the hands of those wishing to harm Israel.

“All of us understand that there is a risk to Israel here, and the question is who can do the best to help them and to help America,” Grayson said of the difference of opinion between his approach and that of AIPAC in this case. Despite his liberal views, Grayson is considered a supporter of AIPAC and has been instrumental in strengthening legislation toughening sanctions against Iran.

While they disagree on the need for military force in Syria, Engel and Grayson both find the recent compromise proposed by Russia, under which Syria will give up its chemical weapons stockpile, to be a positive development.

“As far as I’m concerned, this is the only solution for the problem,” Grayson said. Engel added, “This is definitely something worth exploring,” though he warned that he wouldn’t “go to the bank with promises from Assad and Putin.”