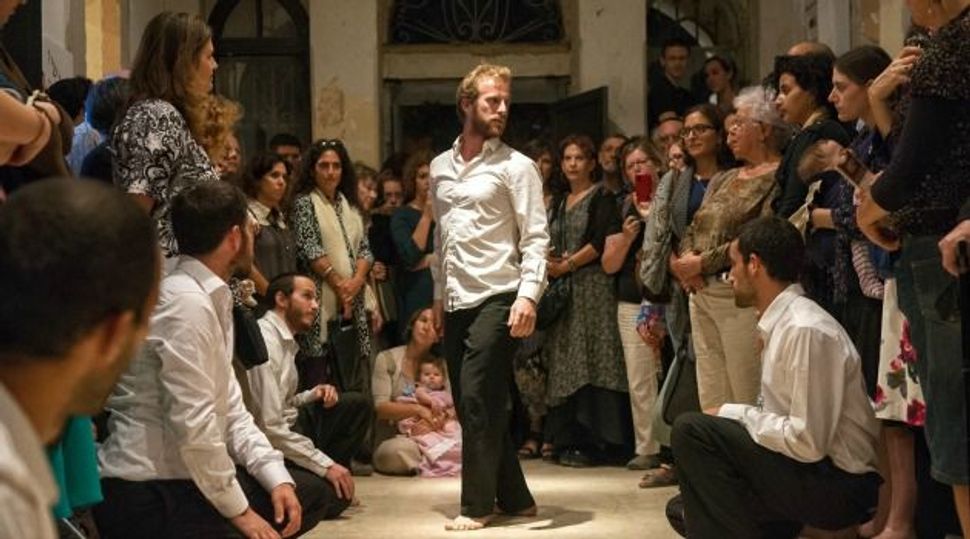 Start the Show: Dancers perform at the opening of the Jerusalem Biennale. Image by jta

(JTA) — The reader opened with a recitation of Psalm 48 followed by a contemporary poem before yielding the floor to five male dancers, all wearing the standard haredi Orthodox uniform of black pants and white button-down shirt. One had bushy earlocks but no yarmulke.

So began the inaugural Jerusalem Biennale, a six-week contemporary art festival that launched this week and will run through the end of October.

Seeking to combine the best in Jewish and contemporary art, all of the pieces on display — from oversize worry beads bearing words like “Iran” and “militant Islam” to an installation of a Shabbat dinner table — share a single goal: To show that Jewish art reaches far beyond the kiddush cups and menorahs available in synagogue gift shops.

“We wanted an event that maps out what exists today in common between the contemporary art world and the Jewish world,” said Ram Ozeri, the event’s organizer. “I am interested in where the world of Jewish content comes out through art. Because it’s a dominant ingredient in Israeli identity, it doesn’t make sense that it will have no expression.”

Exhibiting in five Jerusalem locations and including works by more than 50 artists, the festival aims to serve as a proving ground for emerging Jewish artists and as an opportunity for more established but still unknown artists to reach a wide audience.

Ozeri is hoping the debut biennale is the first step in a recurring and larger undertaking.

Ken Goldman, a Memphis-born multimedia artist who lives on Kibbutz Shluchot in northern Israel, called the festival “not your grandmother’s challah covers.”

“It’s a chance to get in on the ground,” said Goldman, 53. “We’re a very small community of modern artists dealing with Jewish subjects. It’s a chance to meet the world, show our stuff. I want to have one foot here and one foot there, and be straddling that edge.”

Like many of the works in the festival, Goldman’s piece — a photograph of his arm with the deep imprint of tefillin straps along with the biblical quote “You shall bind them as a sign” — deals explicitly with religious ritual.

Many of the works in another exhibit, at the Heichal Shlomo synagogue, explore the meanings of key phrases in the Torah or abstract concepts like divine holiness.

“It was fun imagining in my head what the rabbis would look like,” said Jessica Deutsch, 22, the youngest artist featured at the festival.

Deutsch is exhibiting a series of nine drawings depicting the first two chapters of the Jewish ethical tract Pirkei Avot.

“In my heart I just consider myself Jewish,” she said. “Projects in my sketchbook will reflect what I’m learning.”

The biennale’s best claim to prestige in the contemporary art world comes from Tobi Kahn, a well-regarded New York-based artist who has been featured in a range of museums over a three-decade career. For the festival, he contributed “Urah VI,” a Rothko-esque painting with solid-color squares meant to evoke the gemstone breastplate of the ancient Israelite high priest.

Another exhibit features Kahn’s “Saphyr,” a wooden table with a compartmentalized tray holding 49 small sculptures — an innovative way to count the Omer, the 49-day period between Passover and Shavuot.

“The most interesting thing for me in Judaism is time,” Kahn said. “I’m intrigued by what time means, the whole Jewish law of when Shabbat starts. I’m thrilled to be part of an exhibit that’s opening its doors to many types of Jewish understanding.”

While the exhibits feature a range of media and deal with a wide spectrum of Jewish topics, Ronit Steinberg, a professor of modern Jewish art at Bezalel Academy of Arts and Design in Jerusalem, said the festival risks drawing an exclusively Jewish audience.

“It needs to be marketed so that it isn’t provincial and closed,” Steinberg said. “We know that there’s a danger when you define an exhibit under a certain religion. We need to persuade people to come see this just as art.”

While he understands that the festival will not soon attain the reputation of famous biennales like those in Venice and Berlin, Ozeri hopes over time it will at least become synonymous with the cutting edge of Jewish art.

“Jerusalem is trying to compete with New York and Berlin and Liverpool in Western art, and it can’t really put up a fight,” Ozeri said. “Jerusalem can become an art center if it uses its comparative advantage.”