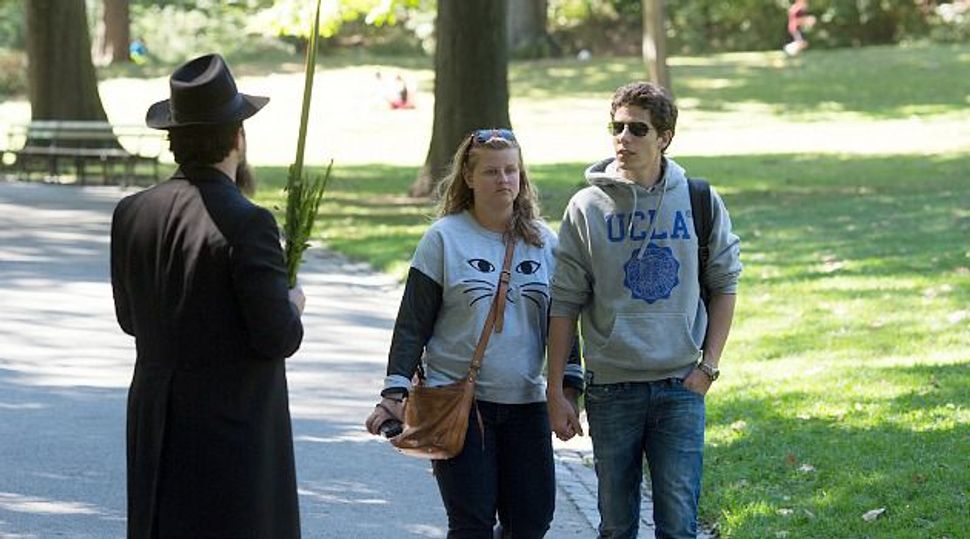 Take My Lulav, Please: Yisroel Pekar approaches unsuspecting New Yorkers in Central Park with a question ? ?Are you Jewish? ? and a gift of the lulav frond for Sukkot. Image by claudio papapietro

“Excuse me, are you Jewish?”

It’s a question heard on the streets of New York and other cities this time of year as members of the Chabad-Lubavitch movement approach other Jews and ask them to shake the lulav and the etrog — a sheath of palm fronds and a citrus fruit — in observance of Sukkot.

Chabad’s so-called “mitzvah campaigns,” which take place on several major Jewish holidays, endeavor to expose nonreligious Jews to ritual practice. But they also have another motive: to advance the number of mitzvahs in the world to hasten the arrival of the Messiah.

For the thousands of Chabadniks who comb city streets in pairs over Sukkot, efficiency is paramount: They aim to discern who is Jewish before they even broach the subject: “Excuse me….” But it’s not easy figuring out who is a member of the tribe and who is not, even in the most Jewish city in America.

On one of the intermediate days of Sukkot, on a subway ride to Central Park, Yisroel and Levi Pekar, 25-year-old twins from the Crown Heights section of Brooklyn, described their three-prong formula for “prospecting.” Yisroel, a teacher at a yeshiva, wore the typical Chabad uniform: a long black suit coat over black slacks. Levi wore a green sweater vest underneath a dark blazer; he is the assistant rabbi of the Hillel at Brookyln’s Pratt Institute. The brothers are experienced “mitzvah campaigners” — Yisroel claims to have administered the ritual to Jon Stewart and Levi says he prayed with Natalie Portman.

First, Yisroel said, “we call it ‘racial profiling.’ Who looks Jewish?” (When asked to clarify later, Yisroel said it’s not about the nose — a “broad, clear forehead with no creases” indicates a non-Jew, while Jews’ foreheads are sometimes lined.) Next is detecting a subtle vibe of recognition, a process that Levi calls “bageling.” Third is playing the statistics game. One out of every five people in New York City is Jewish, Yisroel said. If you exclude African Americans and Asians, your odds are closer to one in three. (But it’s not a rule, the brothers conceded. There was the time that Yisroel ”did etrog” with a “homeless black guy” who said he was Jewish.)

Another surefire way to tell if someone’s Jewish? The person reacts to the question with anger, like the man on the subway who said “I’m not religious” when Yisroel approached him. “He didn’t ignore me,” Yisroel said. “In essence: mission accomplished.”

And if an obviously Jewish person answers the question with an adamant “no”? They’re not there to push an agenda. But 10 years down the line, Levi said, maybe the person who said “no” will remember the interaction and will make a choice to embrace his or her Judaism.

They came to a grassy hill, where a white-haired man was leaning over a baby carriage. “Are you Jewish?” Yisroel asked. “That’s a racist question, and it’s inappropriate,” came the response. They turned a corner and paused next to a hotdog stand. It was time for a bathroom break.

A woman wearing a “visitor services” badge asked if they’d like a map to find the bathroom. “Are you by any chance Jewish?” Yisroel asked. She is. She hesitated for a moment — she was running late — and then agreed to let the brothers administer the blessing, their first mitzvah of the outing. Yisroel handed her the lulav and the etrog and asked her to repeat after him. Levi explained the meaning of the ritual: The four species represent four types of Jewish people, all bound together in good deeds.

“I like connecting to my Jewish roots,” she said. “This is a cool concept, to talk to people and get them engaged.”

The little patch of park turned out to be an auspicious locale for the brothers. A couple walked by. “Are you Jewish?” “No, I’m German,” the man, with a thick Israeli accent, said jokingly. Yisroel and Levi responded to him in Hebrew, and an easy camaraderie set in. The man took the lulav and etrog, while his companion snapped photographs on her iPhone.

As the Pekar twins walked away, they analyzed the encounter. “He was planning his response. He was dying to say that he’s German,” Levi said. “He knew it would trigger our reaction: ‘There’s no way in hell.’”

Next, they passed an elderly woman. “Are you Jewish?” “No, I’m not, but I grew up with Jewish people and I embrace you all,” she said.

Two Israelis later, Yisroel and Levi came across a man in a crisp linen shirt tucked into jeans. He was walking a dog and talking on a cell phone. As the brothers approached, he slowed down and put the phone in his pocket. Is he Jewish? “I’m not religious,” he said. “I have absolutely no idea, I haven’t been to temple in 20 years.” He grinned as Yisroel handed him the lulav and etrog, stumbling over the word “va’higiy’anu” in the Shehecheyanu prayer.

“It’s, like, socially awkward not to say yes,” the man said.

The Pekars continued on. “Are you Jewish?” Yisroel asked a woman carrying a radiology textbook. “Of course she is!” Levi said. The woman said the blessing. Minutes later, five Israelis on bikes slowed down. One by one, they took the lulav and etrog in hand. Three more people stopped by, and then another two. The brothers moved quickly from person to person. In nearly two hours they talked to about 100 people; fewer than two dozen had done the ritual.

The Forward’s photographer snapped the encounters. Levi asked him, “Are you Jewish?”

The pair walked slowly by the player’s open case, which was filled with coins and bills. Then, a distraction: more Israelis. At first, they rejected the lulav and etrog. Then, jokingly, dramatically, the Israelis gave in.

The viola player paused between songs, and Yisroel darted over. Is he Jewish? No, but he has a Jewish name: Tobias Kramer Roth.

A reporter asked Roth if he minded the interruption. “I thought it was great,” he said. “I’m interested in all things Jewish myself. I’m a Latter-day Saint.”

Naomi Zeveloff is the deputy culture editor of the Forward. She can be reached at Zeveloff@forward.com or on Twitter @NaomiZeveloff