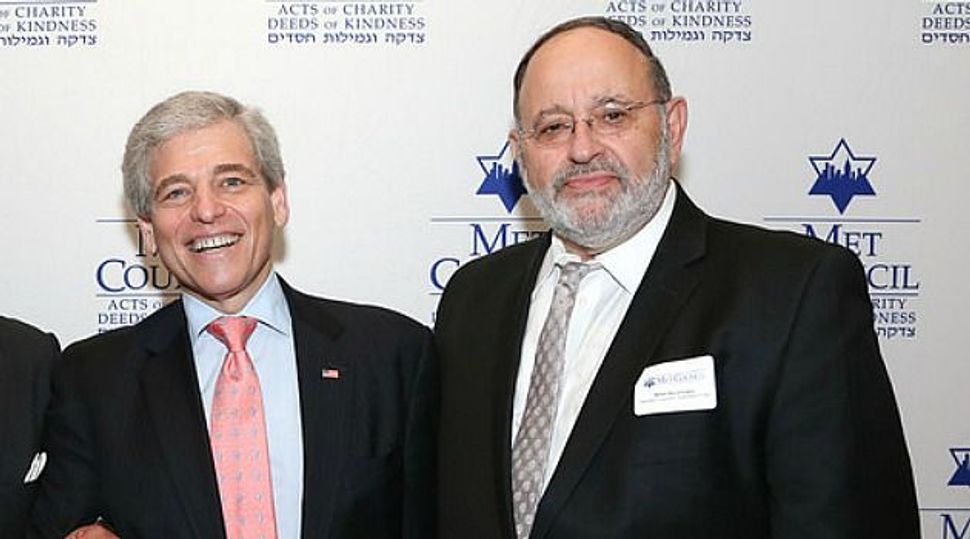 Peas in a Pod: The Met Council on Jewish Poverty terminated its long relationship with Dovid Cohen on the same day that William Rapfogel was fired over a $5 million insurance kickback scheme. Image by courtesy of met council

The Metropolitcan Council on Jewish Poverty ended a long-term relationship with its former executive director on the same day that it fired his successor, William Rapfogel, who has since been charged in a $5 million kickback scheme, the Forward has learned.

Rabbi Dovid Cohen who ran the group in the 1980s, was dumped as a paid fundraising consultant for the Jewish anti-poverty agency in August, an individual familiar with the Met Council said. Because of the ongoing investigation, the source declined to be identified.

When it fired Rapfogel and disclosed the existence of the alleged scandal, the Met Council made no mention of the move to end its years-long relationship with Cohen.

A statement the agency released August 12 said that its internal investigation had revealed no wrongdoing by current Met Council employees. Cohen was a former employee and a contractor.

Cohen did not respond to numerous messages left on his cell phone. His attorney, Alan Abramson, declined a request for comment.

A felony complaint filed against Rapfogel in Manhattan Criminal Court on September 24 charged him with having stolen $5 million from the Met Council over two decades. But it described a criminal scheme that began even before the Met Council hired Rapfogel.

Abramson did not respond to an inquiry asking whether Cohen was that employee.

The alleged scheme operated as a simple kickback: The Met Council would overpay for insurance to a company called Century Coverage, then a confederate at the firm would return the money to Rapfogel and his co-conspirator at the Met Council.

Rapfogel is accused of pocketing $1 million in the scheme. Investigators found $400,000 in cash in Rapfogel’s homes on Manhattan’s Lower East Side and in upstate New York. The insurance firm employee involved in the scheme, who is not named in the complaint, told investigators that Rapfogel had asked for a $27,000 check in 2013 to pay a contractor working at his house.

Rapfogel and the unnamed co-conspirator at the Met Council also told their ally at the insurance firm to make political donations with money from the overbilling scheme. According to the complaint, the checks were given to Rapfogel, who handed them to politicians himself.

Rapfogel used his influence to raise millions from government. The Met Council received $11 million in government grants in 2011 and $15 million in 2010.

Cohen, for his part, used his political heft to raise money for Jewish causes from government agencies after he left his staff position at the Met Council in 1992. In 2010, his group, Hatzalah, received a $445,000 grant from the New York State Assembly to update its communications system. Silver, the Assembly speaker, spoke at the ceremony announcing the grant.

Heshy Jacob, a board member of Hatzalah, told the Forward that the organization does not buy insurance through Century, the firm implicated in the Met Council allegations. Jacob is a close Rapfogel ally.

The Rapfogel complaint has raised questions in the media and among some Republican lawmakers about the possible role of Judy Rapfogel, who is Rapfogel’s wife and Silver’s chief of staff. A spokesman for Silver’s office did not respond to a request for comment on whether the $400,000 allegedly found in the Rapfogels’ homes had changed Silver’s thinking about a possible role played by Judy Rapfogel in the case. In August, when news of the allegations against William Rapfogel first broke, Silver’s office released a statement in which he said he was “stunned and deeply saddened” by the charges. Judy Rapfogel continues to work as his chief of staff.

William Rapfogel’s attorney, Paul Schechtman, maintained on September 24 that Judy Rapfogel had done nothing wrong. “I see no evidence, and I’m confident that there is none, that Judy was aware of any wrongdoing,” Schechtman said.

Schechtman declined to say whether he was conceding that there had been wrongdoing on William Rapfogel’s part. In a statement in August, Rapfogel issued a vague apology for “mistakes.”