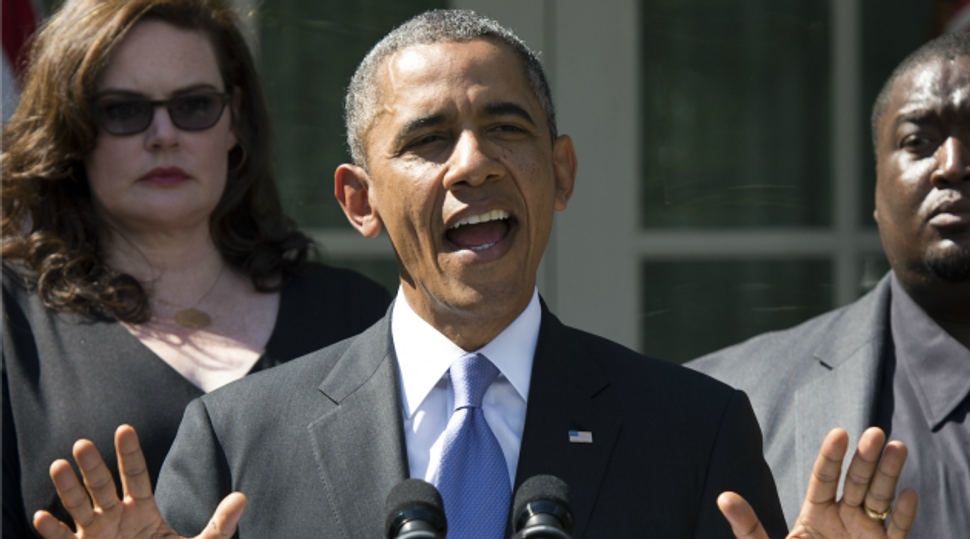 Shut It Down: President Obama blames Republicans in Congress for the government shutdown. What impact is it having on the Jewish world? Image by getty images

Like many other Americans, Jewish communal leaders in Washington spent the last couple of days trying to figure out how to work around the government shutdown — and how it may affect them and their work.

For the Jewish federation of Detroit, news from D.C. about the shutdown led to a decision to cancel the federation’s planned mission to the nation’s capital next week. With scheduled meetings with administration officials at risk of cancellation and with all other Washington attractions, including monuments and museums, closed, the group chose to postpone the mission.

Those who did brave the shutdown found at least one branch of government operating almost in full. Nearly 800 J Street activists descended on Capitol Hill Tuesday for 250 previously planned lobbying meetings at the conclusion of the group’s annual conference.

The meetings, J Street reported, went on as planned, although the minds of members and their staff must have been at least a bit distracted by the negotiations and votes over the shutdown. The congressional flurry of activity also caused some lawmakers to skip J Street’s gala dinner on Monday night and led to the cancellation of Senator Tim Kaine’s planned speech at the conference.

For Jewish organizations dealing daily with federally funded programs, the shutdown’s impact could be much more than a scheduling nuisance.

“The longer this goes on, the greater the impact will be,” said William Daroff, vice president for public policy at the Jewish Federations of North America. He explained that agencies relying on government funding for their programs, mainly those treating elderly and people in need in the community, can shift funds for a while to cover for the lack of government dollars. But the longer the shutdown continues, the harder this task becomes. There is also no certainty that the government will cover retroactively these funds, although in past shutdowns that has been the practice. In a memo to federation on October 1, Daroff warned that “impact on the programs and services that Federations and affiliated agencies provide may be drastic and severe.”

Some Jewish organizations spoke out against the forced shutdown of the government.

“Partisan brinksmanship in Congress has jeopardized the vital safety net programs that millions rely on, including aid to struggling new mothers and their children – a service used by half of all infants in America,” said Rabbi David Saperstein of the Religious Action Center of Reform Judaism in a statement. The group called on Congress “to end this devastating government shutdown.”

The Jewish Council for Public Affairs called the shutdown “a product of a dysfunctional Congress,” and urged Washington to end it quickly.

And there are some that have been trying to add some Jewish value to the forced furloughs. DC’s historic 6th and I synagogue has opened its Shutdown Central, inviting “affected employees and anyone else who needs a place to hang out until an agreement is reached” to come and hang out at the synagogue. The program offered to federal workers with extra time on their hands included yoga, networking workshops and a class on ”understanding Jewish genealogy.”

The shutdown has also forced the cancellation of a planned Ku Klux Klan rally at the site of the battle of Gettysburg.

The Maryland-based Confederate White Knights of the Ku Klux Klan had a permit for an Oct. 5 demonstration at the Gettysburg National Military Park in Pennsylvania. Park officials, however, have rescinded all special events permits due to the government shutdown, NBC’s Philadelphia affiliate reported.

As a result of the shutdown, all national parks are closed