Boundaries Blur Between Jews and Christians in Shocking Ways 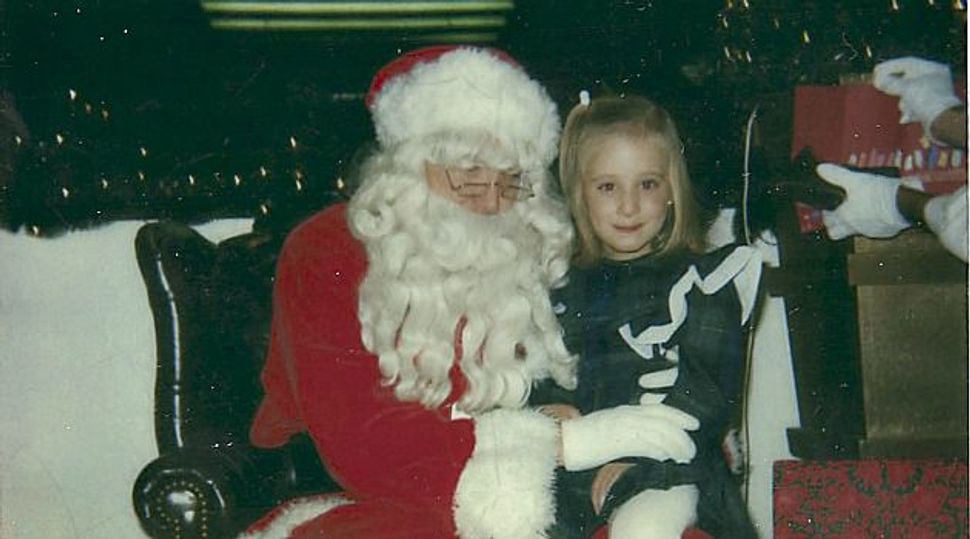 All I Want for Christmas: Forward editor Abigail Jones grew up celebrating Christmas. The Pew survey says she?s part of an ever-growing segment of Jewish America. Image by courtesy of abigail jones

Are you Jewish or Christian? Increasingly, Americans seem to be checking both boxes, according to the 2013 Pew Research Center Survey of U.S. Jews.

It’s not just that a lot of Jews have Christmas trees, though 32% say they do; it’s that 34% of Jews said that they think being Jewish is compatible with believing that Jesus is the Messiah, a belief that’s theologically anathema to traditional Judaism.

Meanwhile, Pew estimates that there are 1.2 million non-Jewish Americans who identify as sort-of-Jewish, even though they are not Jewish by religion and have no Jewish family background.

Findings like these in the new Pew survey point to the emergence of a hazy category between Judaism and Christianity that’s something between a new syncretic religion and a theological muddle.

“It points to the blurring boundaries between Jews and non-Jews,” said Sara Bunin Benor, a professor at the Hebrew Union College-Jewish Institute of Religion who acted as an adviser to the Pew study. “More people than in the past believe that you can be both Jewish and Christian.”

Much of that blurring, according to Benor, is due to intermarriage. The Pew survey found that rates of intermarriage have risen steadily since the 1970s, with 58% of Jews who married between 2005 and 2013 marrying a non-Jew.

Kimberly Smith and Adam Weinstein joke that they are “cashews” — Catholic Jews. Smith grew up Catholic in New York, while Weinstein grew up a Reform Jew in Philadelphia and now belongs to IKAR, a nondenominational congregation in Los Angeles. When the L.A. couple got married in Mexico in May, they wanted both Jewish and Catholic traditions reflected at their wedding.

Officiating duties at the wedding were split between a Christian minister and a rabbi. The rabbi read the sheva brachot under a chuppah, and Weinstein stomped on a glass. The minister read a verse from First Corinthians. There was no ketubah, or marriage contract, and Weinstein forgot the yarmulkes at the last minute.

There was, however, a hora. “That was very important,” Weinstein said.

Weinstein and Smith’s a la carte Jewish/Christian wedding was far from unusual. The wedding section of The New York Times, an important barometer of upper middle-class wedding practice, regularly describes nuptials as having “incorporated Jewish and Christian traditions.”

“People are drawing upon their Jewish and Christian and nonreligious identities simultaneously,” said Steven M. Cohen, a leading sociologist of American Jewry and an adviser to the Pew study, speaking about its findings. “They see no contradiction between being Jewish and accepting some pieces of Christianity.”

While intermarried Jews adopt Christian practice, many Christians appear to be adopting Jewish practice. Pew estimates that 1.2 million Americans have what it calls a “Jewish affinity,” meaning they identify as Jewish despite not being Jewish by religion or having a Jewish family background.

These people are deeply familiar to Rabbi Yechiel Eckstein, president of the International Fellowship of Christians and Jews, which raises $100 million a year for charity in Israel from non-Jews.

“They see themselves… as part of the Jewish people,” Eckstein said of these Christians, many of them evangelical. “The key term for them would be ‘grafted on,’ grafted on to the rich olive tree of Israel.” The allusion is to a passage in the Book of Romans, part of the New Testament, in which Paul describes the relationship between Jews and Christian gentiles. “This is what makes them feel a part of the Jewish people and Israel without either becoming Jewish or abandoning their belief in Jesus.”

Eckstein said he predicts that within the next dozen years, there will be a recognized religious category between Judaism and Christianity of people who feel Jewish but accept Christian doctrines regarding Jesus’ status as the Messiah and the concept of the holy trinity, among other Christian ideas.

Jack Wertheimer, a professor of Jewish history at the Jewish Theological Seminary, isn’t enthused about these non-Jews’ self-identification as Jews. “What does this have to do with Judaism? I can’t understand that,” Wertheimer said. “If you’re going to say that this blurring of boundaries is occurring, is that really good news for a very small minority religion?”

The melding raises certain theological contradictions. Take, for example, the status of Jesus as the Messiah.

The question of whether Jesus was the Messiah was a fault line along which Jews and Christians separated roughly 1,500 years ago. A series of polemics flung between Jewish and Christian theologians over the course of the Middle Ages served to define Judaism in contradiction to an acceptance of the messiahship of Jesus.

“The theological issues are, most fundamentally, the Christian belief that Jesus was the messiah and would come back again despite the fact that he died in an unredeemed world,” said David Berger, a professor of Jewish history at Yeshiva University, of the medieval polemics. Such a belief was considered antithetical to Jewish religious thought, according to Berger, and was a key dividing line between Judaism and Christianity, along with the notion of the trinity.

Yet when Pew researchers asked Jews if believing that Jesus was the Messiah was compatible with being Jewish, 34% answered yes.

Benor credited some of those answers to a key point of Jewish law: that anyone born to a Jewish mother is considered Jewish, regardless of what he or she believes. More Orthodox than Conservative and Reform people said that being Jewish is compatible with believing that Jesus was the Messiah, suggesting that many who answered the question in the affirmative were referring to that point of law.

Yet Benor also said that it points to a shift in attitude, and to a growing belief that it’s possible to be both Jewish and Christian.

Eckstein, for his part, downplayed the contradiction between traditional Judaism and the idea of Jesus as the Messiah.

“Jesus as Messiah is not a foreign concept at all,” Eckstein said. Traditional Jews believe in the concept of the Messiah, Eckstein argued, just not in Jesus himself having been the Messiah. After all, Eckstein said, Jews don’t reject as not Jewish members of the Chabad Hasidic sect who believe that their dead rebbe Menachem Mendel Schneerson was the Messiah.

“We disagree with them fundamentally, but we still incorporate them as part of the Jewish people,” Eckstein said of Chabad messianists.

One side effect of the blurring religious lines is the growth in the number of people who somehow qualify as Jewish. As definitional divisions once firm grow fuzzier, and as increased intermarriage opens Jews to the notion of mixed Jewish and Christian identities, the number of people recognized as having some sort of Jewish identity grows. While the Pew survey estimates that there are 5.3 million Jewish adults the United States, the survey also estimates that the number of adults with a Jewish background or a Jewish affinity is 8.9 million — a full 3.7% of America’s population.

Boundaries Blur Between Jews and Christians in Shocking Ways