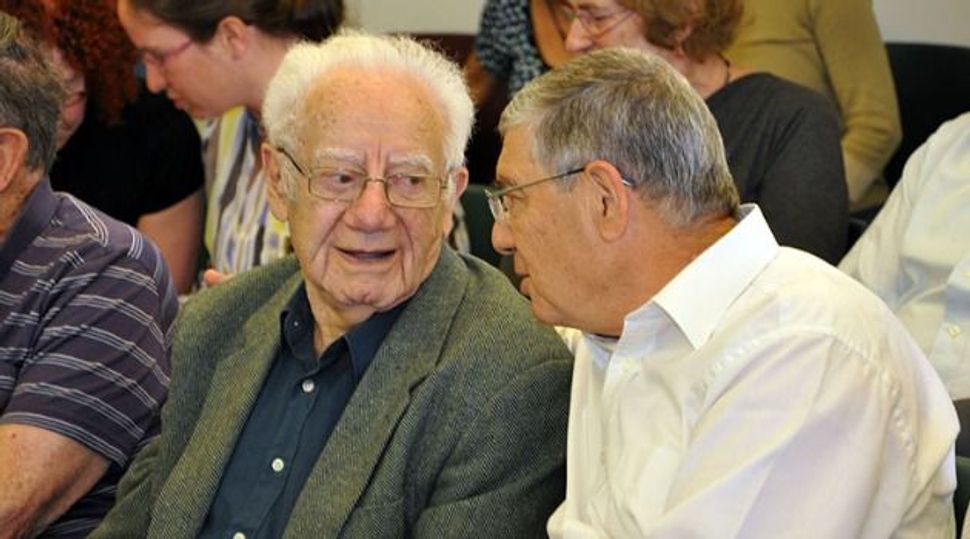 Hero Historian: Israel Gutman, left, fought in the Warsaw Ghetto resistance and went on to be the Jewish State?s most prominent survivor historian. Image by courtesy of yad vashem

A native of Warsaw, Gutman was only a teenager when the Germans invaded his Poland. His parents and his older sister died in the Warsaw ghetto; his younger sister was part of the famed Janusz Korczak orphanage, led by the charismatic pediatrician educator who was the Mister Rogers and Dr. Benjamin Spock of Poland. From Korczak, Gutman learned that courage took many forms in the ghetto; he never forgot that spiritual resistance was of great importance.

Gutman fought in the Jewish Underground and was wounded in April 1943, during the Warsaw ghetto uprising. Deported to Majdanek, the death and slave labor camp in Lublin, Gutman was sent to Auschwitz from there. In the winter of 1945, as the Allies advanced and the Germans retreated, he was forcibly evacuated on the death marches that brought the inmates of Auschwitz to concentration camps on German soil. Many did not survive. Gutman was liberated from Mauthausen in May 1945.

Immediately after the war, he worked closely with Bricha, the underground effort to transport Jews from Soviet-occupied Poland to British- and American-occupied sectors of Europe, and from there to Palestine, then under British blockade. He himself came to Israel in 1946, and like many of his generation he first went to a kibbutz. Gutman was a member of Lehavot HaBashan for a quarter of a century.

In 1961, he was a witness at the trial of the Nazi commander Adolf Eichmann, where he testified, not as an academic but as a survivor of the ghetto uprising, about Jewish resistance. He fought against the then widely accepted view that Jews went like sheep to the slaughter, commanding respect for survivors and for the ghetto fighters.

Gutman began his academic career in his late forties and received his doctorate from the Hebrew University in 1975. The title of his thesis was “The Resistance Movement and the Armed Uprising of the Jews of Warsaw in the Context of Life in the Ghetto, 1939–1943.” Resistance, he insisted, was an integral part of ghetto life.

Gutman joined the faculty of the Hebrew University and for decades worked alongside his colleague and friend Yehuda Bauer. They were the most formidable team of Holocaust scholars and teachers in the world. Gutman headed the university’s contemporary Jewry program, and in retirement he moved on to the next stage of his long career by joining the staff of Yad Vashem, Israel’s Holocaust museum. There he founded Yad Vashem’s International Institute for Holocaust Research and later served as the museum’s chief historian.

For years, as director of content for the United States Holocaust Memorial Museum as it was being built, I worked closely with Gutman. He and Bauer were invited to join the Content Committee, where they reviewed the museum’s permanent exhibition. As a team, they insisted on the centrality of the Jewish experience in the Holocaust and fought the battles that came to define the museum’s formative years. They also were instrumental in bridging the gap between Washington and Jerusalem when many Israelis feared that the creation of the American museum would overshadow the significance of Yad Vashem. In practice, one institution makes the other better.

Gutman argued passionately for the centrality of Jewish victimization in Poland while according Polish victims of Nazism great respect. It was a position that was to heighten his influence in Poland in the post-Communist era, when Poles were willing to talk about their long history with Jews and to grapple with the meaning of the “presence of Jewish absence and the absence of Jewish presence.” Gutman was honored by the University of Warsaw and served as deputy chairman of the International Auschwitz Committee, which oversees the state museum and guards its legacy.

His magnum opus, “The Jews of Warsaw, 1939–1943: Ghetto, Underground, Revolt,” is a work of singular importance, essential to all who wish to study the most significant ghetto in German-occupied Poland. I worked closely with Gutman on a more popular and accessible version of the original work, simply titled “Resistance: The Warsaw Ghetto Uprising.” Together, we edited “Anatomy of the Auschwitz Death Camp,” which brought together two generations of scholars from across the globe to create a work the Village Voice called “the definitive book on one of our century’s defining horrors.”

After his work with the U.S. Holocaust Memorial Museum, Gutman went on to serve as chief historian during the creation of the new Yad Vashem, which opened in Jerusalem in 1993 on a new, expanded site, replacing the original museum. There he used his scholarly expertise, his human sensibility and perhaps even some of the museological training he had absorbed in Washington and contributed intellectually and spiritually to the magnificent renewal of the museum. His testimony and scholarly imprint can be seen throughout the museum’s halls.

Gutman is survived by his two daughters and three grandchildren. His wife predeceased him. He is also survived by his many students and by the colleagues who so respected him as a scholar, revered him as teacher and cherished him as a friend. They, too, were his descendants.