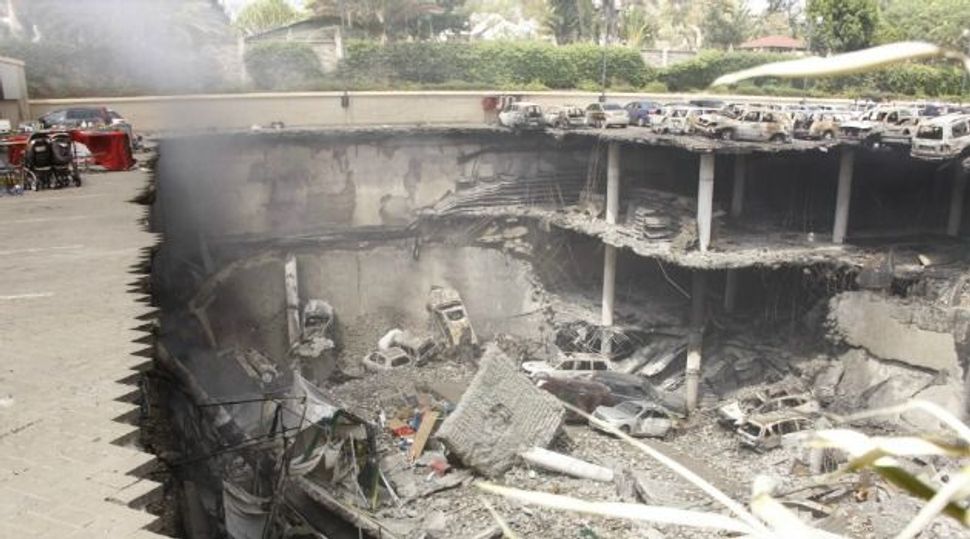 Destroyed: The remains of the Westgate Mall in Nairobi after Kenyan security retook the complex from Islamic militants. Image by getty images

(JTA) — When Rina Attias phoned to say that she was trapped with terrorists inside Nairobi’s Westgate mall, her husband Albert replied with a short instruction: Hang up right now.

Albert Attias, the head of the Jewish community in the Kenyan capital and an Israeli military veteran, wanted to communicate with his wife by text message so she wouldn’t be overheard speaking Hebrew. Their Israeli connections were not something the couple were eager to advertise, even in normal circumstances. 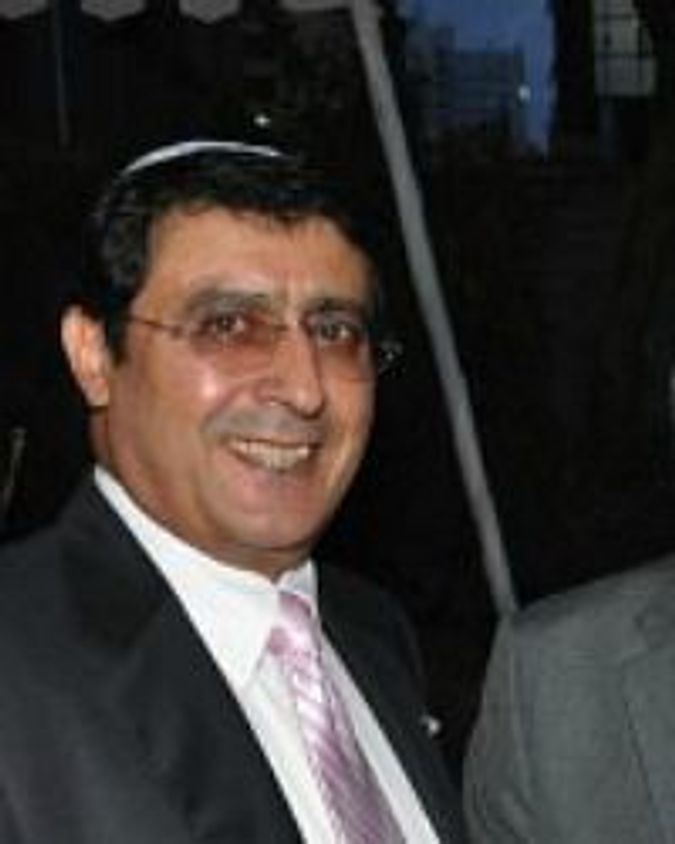 “I was gravely concerned,” Albert Attias told JTA, recalling the first hours of the deadly attack and two-day siege carried out by Islamic militants at the upscale shopping plaza that began on Sept. 21. “I prayed she’d get out before dark because at night anything could happen.”

Rina Attias was trapped for six hours before escaping. But her ordeal at what was considered a safe area in Nairobi has shaken the brittle sense of security for the approximately 600 members of the Jewish community of Kenya, a country that has strived, not always successfully, to escape the violence raging just beyond its borders.

“We were already careful, but this attack reinforces in us the need to be vigilant,” Attias said.

Along with Attias, several hundred bystanders fled the mall after a dozen or so armed terrorists stormed the five-story building and holed up there with hostages. The death toll included 61 civilians, six security officers and five suspected terrorists. Nine other suspected terrorists are in custody, Kenyan authorities have said, but some are believed to have escaped through a sewage canal that security forces discovered 72 hours after the attack began.

No Jews were among the victims of the attack, according to Attias, which occurred as many community members attended the bar mitzvah celebration of an Israeli diplomat’s son.

Opened in 2007, Westgate was a “place of comfort, upscale luxury, a feeling of something foreign that doesn’t exist in too many places here,” the Kenyan journalist Jeff Omondi said.

Beyond the air-conditioned walls of Westgate lies a crime-infested metropolis of 3.1 million where vultures circle over vast slums and potholed roads in search of a meal in one of the many garbage heaps festering in the tropical sun.

The mall is a foreign novelty to Kenyans, but for the tens of thousands of Western Nairobians, Westgate — with its Israeli-owned brasserie, sushi restaurant and upscale clothing stores — offered access to familiar amenities that are hard to find in this eastern African republic.

It was the first place that Rebecca, the wife of Nairobi’s newly arrived rabbi, was taken to in Nairobi. On her blog, she described it as a pleasant spot to enjoy a leisurely cup of coffee. But in an interview with JTA, she requested that her last name be withheld.

“I’m sorry, this whole business has made me a bit paranoid,” she acknowledged.

Charles Szlapak, a longtime member of the Nairobi Hebrew Congregation, told JTA he believed Westgate was targeted “because it represents the West and the Kenyan government’s pro-Western attitudes,” and that he had “no reason to believe it was struck because of anything connected specifically to Jews.”

But Sheikh Abulaziz Abu Muscab, a spokesman for Al Shabab — the Somalia-based wing of al-Qaida that claimed responsibility for the attack — was quoted on Sept. 25 as telling Al Jazeera: “Westgate is a place where there are Jewish and American shops. So we have to attack them.”

Szlapak, a Poland native born in the 1930s, says Jews have lived in Kenya for well over a century. Nowadays, most Jews living in Nairobi are Israeli businessmen and their families, according to Attias.

Al Shabab is presumed to have staged the attack as revenge for the involvement of Kenyan troops in the quelling of an Islamist insurgency in Somalia. It made no reference to Israel in its statements on the attack. Alex Trachtenberg, an Israeli businessman whom media reports have identified as Westgate’s owner, did not respond to requests for comment from JTA.

Westgate was among several business ventures launched by Trachtenberg in Kenya, where a growing middle class, relative stability and government incentives have attracted many foreign investors, Israelis among them. Before Westgate, Trachtenberg started a fishery, among other businesses.

While it is still not known whether the mall was selected for its Israeli connection, Islamist militants have targeted Israelis in Kenya in the past. In 2002, al-Qaida affiliates blew up the Israeli-owned Paradise Hotel in the southern coastal city of Mombasa and fired two missiles at a chartered Boeing 757 belonging to Arkia, an Israeli airline.

Three Israelis and 10 Kenyans died in the hotel attack.

“The Mombasa attacks were clearly targeting Israelis, but according to what is known thus far, the Westgate action was not,” said Zvi Mazel, an expert on militant Islam in Africa and former head of the Israeli Foreign Ministry’s Africa Department. “The Westgate attack was part of an internal African conflict, which the terrorists tried to globalize by selecting a Western symbol as their target.”

Still, Westgate’s Israeli link was no secret. In addition to media articles about Trachtenberg, one of the mall’s most popular businesses was a branch of Artcaffe, a brasserie jointly run by Israelis and Kenyans and styled after an Israeli chain with a similar name.

A favorite with Israelis for its shakshuka egg dish, Artcaffe was the subject of a protest earlier this year for perceived racism against black customers. Management rejected the allegations, but the “Occupy Artcaffe” campaign nonetheless exposed anti-Western and anti-Israel resentment that may have had a role in the attackers’ ability to find local collaborators, as Kenyan authorities believe they had done.

One of the dozens of articles published online about Artcaffe has a reader comment posted that threatens its owners. “Shoot to kill this idiot!” the comment reads.

The attack at Westgate is believed to have started at Artcaffe.

Rabbi Brachyahu Schonthal, 40, the community’s England-born rabbi who arrived with his wife in August, said he was trying to organize an interfaith commemoration service for the victims of the Westgate attack, but some members of the community fear it would attract too much attention.

“It’s a reaction that comes naturally to someone socialized in the spirit of American leadership,” Schonthal said, “but this community is used to keeping a low profile and I think the attack will only reinforce that.”