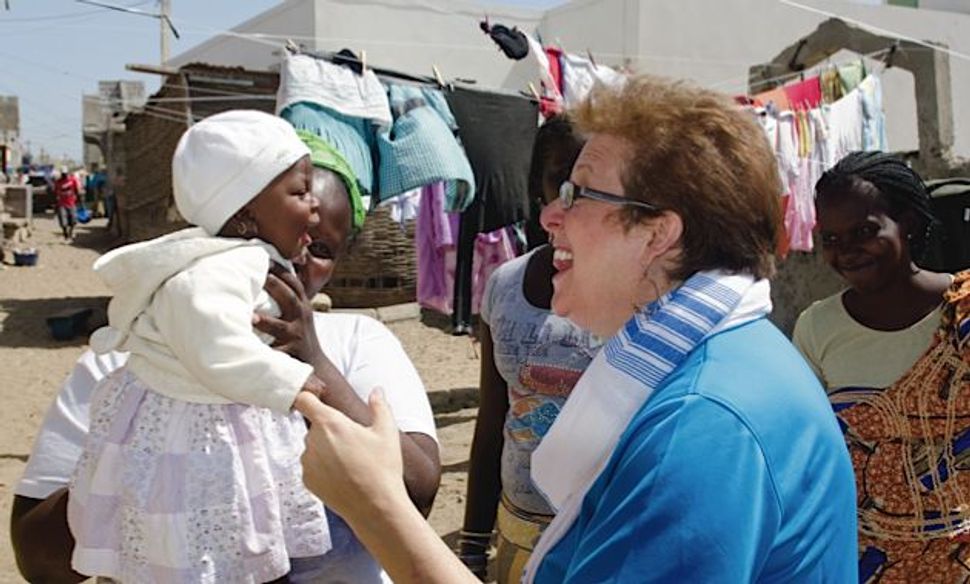 Child Advocate: Caryl Stern, pictured in Senegal, has three sons of her own. Image by Courtesy of UNICEF

Each year on Yom Kippur, Caryl Stern mourns her father at Yizkor, the traditional prayer chanted to honor lost loved ones. In 2008, she also prayed for Fatima, a 6-day-old infant in Sierra Leone whom Stern watched die because the vaccine needed to save her life was unavailable to her.

This year, Stern, president and CEO of the U.S. Fund for UNICEF, the United Nations Children’s Fund, said the children of Syria were on her mind.

“Most in the U.S. see Syria as the enemy, and therefore don’t understand the real plight that Syria’s children are still children,” she said.

The millionth Syrian child just crossed the border out of Syria in August, she added. It was a milestone that most others overlooked.

The phrase “children are still children” echoes like a mantra throughout Stern’s third book, “I Believe in Zero: Learning From the World’s Children,” which was published October 1 by St. Martin’s press. The book’s title is a reference to a UNICEF mission she spearheads: 18,000 children under the age of 5 die each day from preventable causes — and Stern firmly believes that the number can be reduced to zero.

“It’s an aspirational goal,” Stern said. “But no death can ever be okay.”

In clear and not overly sentimental prose, “I Believe in Zero” recounts the evolution of Stern’s global consciousness. She chronicles trips to eight developing countries — Mozambique, Sudan, Haiti, Brazil, Peru, Sierra Leone, Bangladesh and Kenya — during which she visits UNICEF projects. She witnesses the daily plights of impoverished children and women, visiting a sparse schoolhouse in Brazil’s Amazon jungle and spending a day with child laborers in Bangladesh, for instance. Each chapter recalls a particular people, place and UNICEF project.

“We have a responsibility to ensure that as many children as possible are not robbed of their childhood,” she writes in the book.

But Stern’s story is not simply about highlighting her organization’s work. “Being able to help is a privilege, not a choice,” she emphasized several times during our conversation. In the book and during our interview, she reflected on how two aspects of her identity — religion and gender — inform her humanitarian outlook and work in the development world.

Ruth Messinger, president of American Jewish World Service, said that those two identity markers, which she shares, can be powerful tools in development work.

“I’m not at all surprised that’s how Caryl defines her work,” Messinger said.

Stern took a circuitous path to her current position. Born in Peekskill, N.Y., she originally planned for a career in theater — in set and costume design. Though that dream didn’t pan out, she has worked with numerous famous thespians, such as Salma Hayek, who accompanied her on a trip to Mozambique to learn about maternal health care with UNICEF and Procter & Gamble Co.

Instead, she became an award-winning child advocate, anti-bias educator and civil rights activist. After a 10-year career in higher education, including a stint as dean of students at New York’s Polytechnic University, she spent 19 years at the Anti-Defamation League, first as the director of the education division, then as chief operations officer and finally as senior associate national director (Abraham Foxman’s No. 2). Before joining UNICEF in 2006 at age 50, Stern had never traveled to the developing world; now, international travel is a core component of her job.

Though she no longer works at a Jewish organization, Stern says her brand of Judaism, epitomized by the mandate to improve the world, or tikkun olam, compelled her to engage with the world’s impoverished communities. Like many of her generation, she grew up in the shadow of the Holocaust. Her mother and uncle escaped from Vienna and fled to America as children as the Nazis advanced. They were among the lucky few to make it out.

“My mother was given the opportunity to come here as a child alone,” Stern recalled. “I have that image of this child whose parents are somewhere but can’t care for her. That’s what I see when I see a child, and that’s what drives me everyday.”

Stern’s recounting of her 2007 visit to refugee camps in Darfur — the site of a genocide the American Jewish community rallied against using the slogan “Never again” — is one of the most compelling parts of her book.

“As a kid, I couldn’t understand how the world sat back during the Holocaust, and so to be given the privilege to go to Darfur was tremendously cathartic for me,” Stern said.

In “I Believe in Zero,” Stern writes about how many aspects of Sudanese Muslim culture felt familiar — from the dedication to prayer to the Arabic spoken on the street, which reminded her of Hebrew.

“I go to the Arab world, where my upbringing makes me expect I’ll find myself a stranger in a strange land and I don’t have to worry if there’s pork on the plate,” she said, laughing.

UNICEF also does humanitarian work in the Palestinian territories, focusing on the welfare of children in Israeli administrative detention as well as on issues of health and sanitation. The ADL, Stern’s former employer, has alternately criticized and praised UNICEF programs for Palestinian children.

“I defy anyone to say that one life has more value than another,” said Stern. “And what better way is there to ensure safety and security than to save someone’s child? That’s the way you build bridges.”

In general, though, Stern eschews taking sides in political discussions. Her time is limited, she says, and the needs of children — UNICEF’s and her own — are her top priority.

She credits the support of her husband, real estate developer Donald LaRosa, and their three sons — James, 14; Lee, 18, and Brian, who is now married with two small children — for helping to keep her grounded despite her jet-setting lifestyle. Her work has also initiated conversations among her family members about their own consumption; she was proud when one son took the initiative and imposed a shorter shower rule in the house to conserve water.

In her book, Stern recounts two trips she organized for her sons and their peers, the first to Brazil and the second to Peru. In Peru, her youngest son suffered altitude sickness. She panicked as she realized that the clinic she was taking her son to — clean for Peru — was far below the standard of care she usually provided to her children.

Stern says that as a mother, one of the hardest parts of her job at UNICEF is reconciling the hardships that she sees with the privileged lives she can provide her sons in America.

As an example of the tension she sometimes feels, she discussed the fact that the U.S. Fund for UNICEF does not accept donations from candy companies — though UNICEF funds in other countries do — because of the industry’s negative impact on child obesity and nutrition. But as a mother who knows the fear of failing to provide for her children, she admitted feeling conflicted about the policy.

“If my child were in front of me with no food to eat and you said to me, ‘I can save your child if I take money from a company that contributes to obesity, I’d probably find that acceptable,’” Stern said, adding quickly, “That’s just Caryl Stern, that’s not UNICEF.”

Of course, balancing motherhood and her work at UNICEF has not always been easy. Stern still wrings her hands each time she boards another plane that will take her far away from her family. But she attempts to be a present parent even while overseas. During her Darfur trip, she writes in the book, she assisted her son with algebra homework over the phone as a Sudanese child sat on her lap. Both children were comforted by her presence.

Stern is candid about not having all the solutions to the problems facing the world’s impoverished children. But she just wants to be part of finding the answers, which she says will come from a melding of traditional and new ideas: “One of things I never say in the book that I wish I had said was that some of the most effective means of changing the worlds of children are the least costly.” She cites one initiative in rural Ethiopia that enlisted teenagers in teaching younger students with pebbles and inexpensive flash cards.

“I think she brings the same compassion to her family as she does to sitting down with a family in a developing world to talk about their children,” said Brian Meyers, who is Stern’s chief of staff and has been her co-traveler for the past six years. “I don’t know if it’s a female or male trait, but something I’ve learned from her.”

Naomi Mazin, who is Stern’s former ADL colleague and has been her close confidante since the women were 12, said that Stern’s compassionate side is part of her effectiveness.

“When we were young she was a writer and an artist,” Mazin said. “You never expected her to be the businesswoman. But the compassion part makes sense.”

Stern is not sure what lies ahead.

When she joined UNICEF in 2006, she promised to stay only seven to 10 years. This year is her seventh. Her decision to set a deadline was a strategic move: She did not want the organization to grow too dependent on one leader. “I want to leave a healthy, strong organization, and I want to leave with shoulders still strong enough to hold somebody else up,” she said. “I just don’t think it’s healthy for an organization to have a CEO for more than [seven to 10 years].”

Her philosophy contrasts with the modus operandi of many of the longtime leaders of American Jewish organizations, such as her former boss, Foxman, who has been at the ADL for 29 years.

Stern says that after UNICEF she would like to move into another leadership position, perhaps returning to the field for a longer period when her kids have left home. “It’s hard to find a job that has all three: [strong] values, [the vision] to make a difference and [the chance to] earn a real living,” she said.

In the end, Stern does have one diva request.

“I want Meryl Streep to play me in the book’s movie,” she said, laughing heartily.

Miriam Berger is a freelance journalist with a focus on travel and Middle East affairs.