A (Mixed) Blessing on My Jewish Head 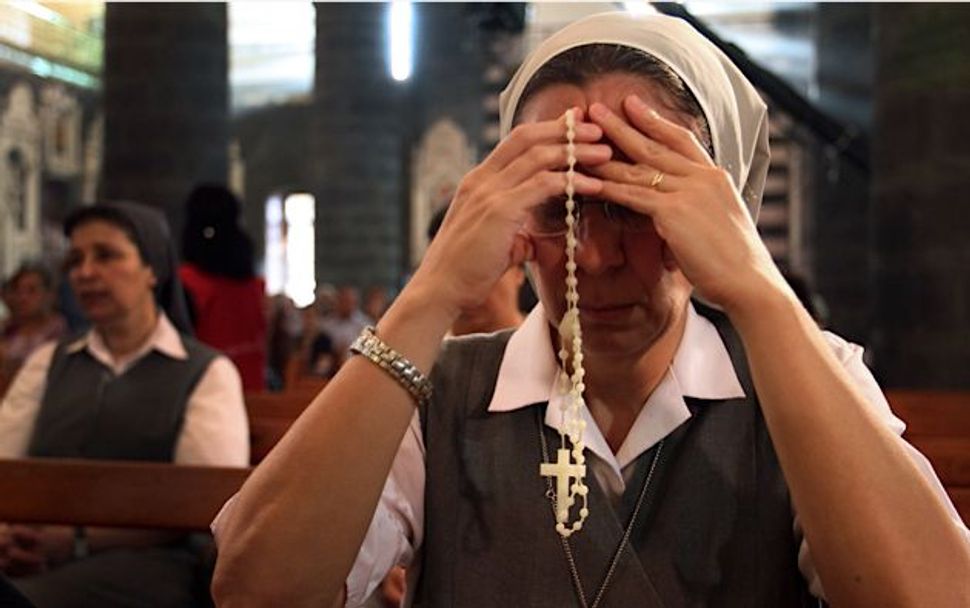 Gesundheit: If a nun blesses you, it?s a good thing, even if you didn?t sneeze. It?s not easy to feel the same about every ?blessing.? Image by Getty Images

When I worked at a Catholic college, the nuns were forever blessing me, even when I hadn’t sneezed. The nuns’ blessings were like a warm, fuzzy blanket on a cold winter night. During my seven years at the college, I came to admire the dedication and selflessness of the sisters. I considered it the highest compliment whenever I was mistaken for a nun. “Sister Nancy” filled me with the same kavod, or honor (to use a Hebrew term), that I felt being blessed by them.

And the setting for the blessing — the campus of a Catholic college — normalized such utterances. God was alluded to so often at the college that one would have thought He was one of its benefactors (which, in a sense, they considered Him to be). Prayers routinely opened department meetings, faculty assemblies and student activities.

At my first staff meeting, I was even prayed over, and proclaimed to be a blessing to the library and the college. When was the last time your boss thanked God for your employment? So expected had these benedictions become, I would have been disappointed if I left the presence of a nun without being blessed.

But being blessed at a community college by a colleague’s phone message that said “Have a blessed day” was different. Religion was rarely a topic of conversation at that publicly funded institution. Of course, as the old joke goes, as long as there are math tests, there will be prayer in school.

Because of our secular work setting, I didn’t know my colleague’s religion. I wasn’t sure if she was wishing me a day blessed by Allah, the Earth Goddess or Xena the Warrior Princess. According to one online source, “Have a blessed day” is the secret handshake of Southern Baptists, frequently used in Texas, especially by Sam’s Club cashiers.

But even had I known her religion, I couldn’t divine what theology she believed in. Was the God she had in mind an inclusive, merciful, loving God? Or was it the hellfire and brimstone, “Jesus is the way, the only way” kind of God? As a Jew, I wanted to know before accepting the blessing.

At least her invitation was more open-ended than the one I received volunteering at an evangelical church’s community food pantry. After helping load groceries into my car, one of my fellow volunteers took my hand, looked into my eyes and asked, “Now, is there anything you would like for me to pray for you?”

I pulled his hand closer, lowered my voice and said, “No, thanks. Now, is there anything I should pray for you?”

He muttered, “Uh, no,” before dropping my hand and abruptly turning away.

Triumphantly slamming the trunk door closed, I was pleased that I had unmasked what I considered to be the reality lurking behind his prayer offer: the assumption that his God was mightier than my God. And worse, that he — and he alone — could intercede with his Great and Glorious Wizard on my behalf.

How different his approach was to that of the Catholic college nuns, whose blessings were intended for me, but never done for me. Like my mother saying, “Drive safely,” when I back out of the driveway, the sisters’ blessings meant only that they cared deeply for me and wished me well.

This was most likely also the case with my work colleague. Her recorded message had not said, “At the sound of the beep, leave your prayer for me to deliver directly to Jesus.” Rather, the recording was her way of saying, “Have a nice day,” but with a punch.

My neighbor was probably trying to convey something similar when concluding even the most pedestrian conversation with, “Blessings.” The first time she made this heavenly reference, I was the one taken aback. Other than praying for the rain to stop, she and I hadn’t engaged in much talk of religion, so her blessing came out of the blue.

I am used to hearing it now, but still not sure how I should respond. Unlike a phone message, which is easy to ignore, a blessing offered in person seems to call out for a response.

I usually toss out, “See you later,” or “Take care.” I know that “Goodbye,” a contraction of “God be with you,” is appropriate, but it seems too commonplace. From now on, whenever my neighbor offers “Blessings,” I think I’ll respond with, “Thank you,” or “Blessings to you, too.”

Or maybe I’ll try something closer to my own theology, such as, “May the Force be with you.” If I add a wave with fingers spread in the V-shape that Leonard Nimoy made famous on Star Trek, I will even be invoking the Jewish priestly blessing. That way, no matter what she believes, I know no God can top that.

Nancy Kalikow Maxwell is working on a nonfiction book about Jewish women in retirement. She can be reached at [email protected].

A (Mixed) Blessing on My Jewish Head