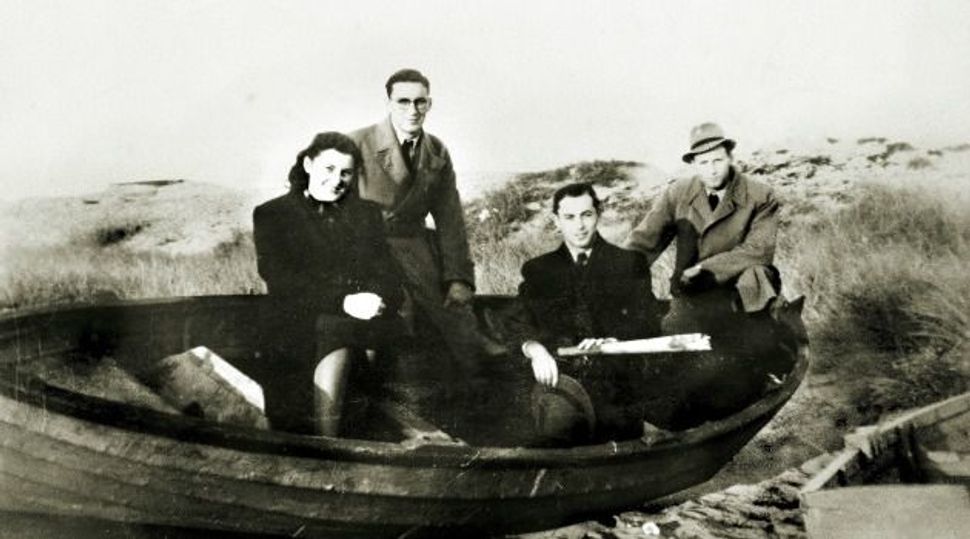 Embellished Tale? A Jewish family lands in Sweden after escaping from Denmark as Nazis prepared crackdown in 1943. Image by courtesy of museum of danish resistance

In the coming weeks, the 70th anniversary of the rescue of the Danish Jews during World War II will be marked with speeches and toasts, gala performances and torchlight processions. The story of how the Danes helped their Jewish compatriots to safety on the coast of Sweden is always heart-warming.

The fishermen who ran the crossings are the heroes of the story. But such heroic tales often lack nuances. The question is whether, in honor of the occasion — and with all due gratitude and respect — it is possible to place the rescue mission within a contemporary perspective with the following uncomfortable assertion:

The Danish fishermen were operating in the same business as the people smugglers who are currently transporting people from such countries as Somalia, Sudan, Syria and Afghanistan, away from the war zones to potential protection in Fort Europe.

Some of the fishermen did it out of a sense of responsibility and the goodness of their hearts, but others were motivated by anything but altruism: There was money to be taken from the pockets of the persecuted. The escape of the Jews was thus also good business for (some of) the fishermen.

Over the past 70 years, the reputation and renown of the skippers have been tended carefully as a spiritual artifact of great significance to the history of Danish mentality and identity during those five cursed years. The Zealand coastal fishermen were tailor-made for the convenient story of the righteous people who did the morally correct thing — on a par with the resistance movement — while the politicians stuck to a more pallid formula to navigate the country through the war.

Yes, the Danes did help their Jewish compatriots, and as the son of parents who themselves had to flee as children, I am of course eternally grateful. But I am also skeptical about the story passed down to me, inasmuch as it has filtered out the part about how the refugees often (though not always) had to pay large sums of money to obtain help.

Throughout the postwar period, the Danes — Jews and non-Jews alike — have wanted to remember the rescue operation as an example of chivalrous humanity.

But in Jewish circles, you still hear many stories about how much it cost to secure a place on a fishing boat, and some families can relate rather shameful stories about how they returned to their apartments after the war to find that the apartments had been ransacked, or had been taken over by other people, even though they had paid neighbors to look after everything.

Many Danes did help, but some put self-interest first.

We do not need romanticized stories about the Occupation, even though they are the most satisfying. Jews and non-Jews alike really do wish to maintain the edifying story of a nation that stood together to protect the persecuted minority. Without any nuances.

In an age where every asylum seeker’s motivation is subject to detailed examination, it is also relevant to ask what it is that drives those who help the refugees on their way.

And it should not be taboo to examine the less-than-chivalrous motive that prompted the Danes to help the Jews. There’s no shame in money.

In his new book, “Compatriots, the Escape of the Danish Jews in October 1943,”, Bo Lidegaard, writes that there were “sarcastic remarks made about the earnings of the fisherman” even at the time. Some people believed that the Jews had paid exorbitant prices — whatever that may be when your life is at stake.

And the laws of supply and demand also apply here. As the crisis peaked and the number of families to be shipped across The Sound increased, so, too, did the price. Lidegaard estimates that the average price for one refugee was 1,000 kroner, which corresponded to a third or a quarter of the annual wage for a skilled worker (nearly half the refugees belonged to this social class).

The fishermen ran considerable risks, and of course they had to earn enough to provide for their families in case the Germans caught them. And there is nothing to indicate that the Jews expected a free ride across The Sound.

“They were more afraid of falling into the hands of tricksters who would take their money without delivering the boat trip,” Lidegaard writes.

In exactly the same way, refugees today are afraid of falling into the clutches of cynical and corrupt scoundrels who abandon their human contraband in a locked container. There will always be greedy vultures waiting to exploit the desperate situation of refugees. And not all refugees have access to asylum in a peaceful neighboring country with the formidable qualities of Sweden.

I have often heard the objection about asylum seekers today that they cannot be “genuine refugees” if they have been brought here by people smugglers. That is pure nonsense. The Danish Jews paid the smugglers, but that by no means diminished the authenticity of their need for protection. It is absolutely essential to remember this if we wish to use past experiences to understand the present.

Klaus Rothstein is a Danish journalist. This article originally appeared in the Danish newspaper Weekendavisen.