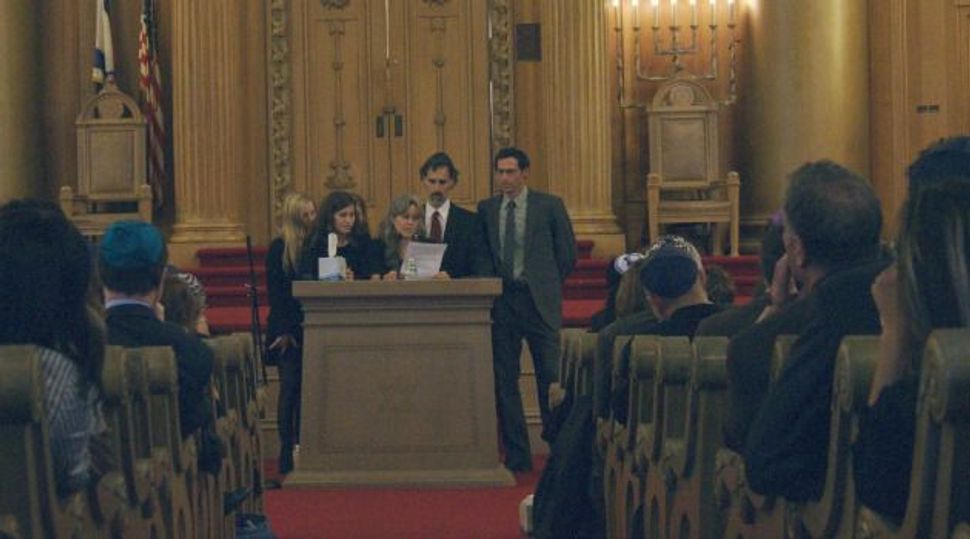 Hundreds gathered at Congregation Beth Elohim in Park Slope on Thursday for the funeral of a 12-year-old boy killed Brooklyn boy who was struck by a van and killed on Tuesday evening outside his home near Prospect Park.

Amidst audible sobs in the packed synagogue, friends and family of Samuel Cohen-Eckstein stood to bid him farewell.

Rabbi Ellen Lippman and Cantor Lisa B. Segal of congregation Kolot Chayeinu led the emotional and difficult service, at times even shedding a few tears themselves.

“They’re a wonderful family,” Segal told the Forward after the service. “Amazing people.”

Tamar, Samuel’s older sister, spoke first, and said that her brother used to “fill every silence with his silly trumpet talent and insightful comments about the world.”

Her voice cracking, she recalled the longest time they had ever spent apart, when Sammy went away to summer camp for four weeks.

“I was so happy when you wrote me a letter,” she told her brother, in absentia, “even though it was short and didn’t really say much.”

Amy Cohen, Samuel’s mother, said she was shocked she will not see her son bar mitzvahed, or ever find out where he will attend high school; his choice was between Bard High School in Manhattan or Brooklyn Tech. She recalled how he used to “drag me to the gym to keep me young” and around the home would “insist Tamar had to empty the top half of the dishwasher when he emptied the bottom,” to make sure the chore assignments were really equal.

“I am wracked with guilt that I could not do more to protect him,” she said. “I still can’t believe that the six-pack abs he loved to show off couldn’t protect him from the van. In the end, I want to believe that he chose death over a life with out the ability to experience joy.”

“There’s a huge hole in our family and in our hearts,” said his father, Gary Eckstein. “We were all excited to see the person he was becoming. We’d like to celebrate the life he lived which was full and vibrant.”

“He was known for saying constant thank yous for even the smallest thing, and had incredible dimples and an infectious smile,” Lisa Cohen said about her nephew. “Life without him is unfathomable.”

Rabbi Lippman read a portion of what would have been Samuel Cohen-Eckstein’s d’var Torah at his Bar Mitzvah ceremony, which recounted the story of members of his family returning to Germany after the Holocaust. The boy said he would have to “look deeper into why people forgive each other” and such horrible events.

Samuel Cohen-Eckstein was due to celebrate his bar-mitzvah on November 16 at Congregation Kolot Chayeinu in Park Slope. The progessive synagogue’s tradition dictates that each b’nei mitzvah make their own talit for the occasion. According to Segal, the synagogue’s cantor, Samuel’s parents will be keeping his.