Polyamorous Jews Seek Acceptance of Multi-Partner Lifestyle — Even in Shul 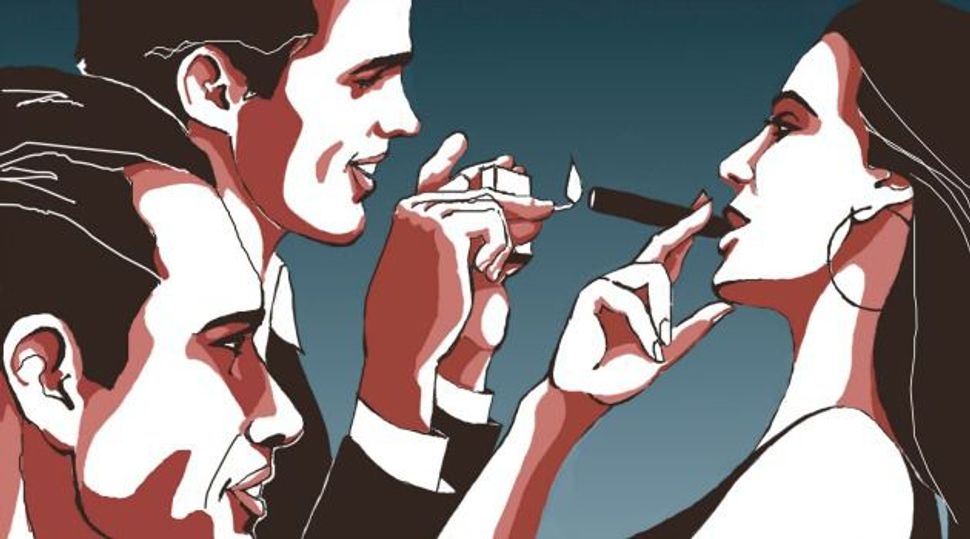 (JTA) — Bud Izen wasn’t prepared for the reaction he received the first time he brought his two girlfriends with him to synagogue in Eugene, Ore.

The rabbi stopped the trio in the parking lot outside the synagogue and grilled Izen’s partners about whether or not they were really Jewish. Izen hasn’t been back since, but he and his girlfriend — now his wife — still engage in polyamory, the practice of having more than one intimate partner at a time.

A number of partners have been part of the couple’s relationship since Izen, 64, and Diane Foushee, 56, first got together 3 1/2 years ago. Now they are seeking a third partner in the hopes of forming a stable three-way relationship, or triad.

“We want to use the relationship that we have to bridge our way to the next relationship,” said Foushee, “so that each of us in turn is given strength.”

Polyamory, often shortened to poly, is a term that first came into circulation in the 1990s. It is distinct from swinging in that it typically entails more than just sex, and from polygamy, where the partners are not necessarily married. Polyamorous relationships often are hierarchical, including a “primary” relationship between a couple that can be supplemented by a “secondary” relationship with a girlfriend, boyfriend or both.

Such arrangements remain far from mainstream acceptance. But in the wake of the progress made by gay and lesbian Jews in winning communal recognition for non-traditional partnerships, some polyamorous Jews are pushing to have their romantic arrangements similarly accepted.

“The only kind of queers who are generally accepted in some sects are monogamous married queers, upstanding queers,” said Mai Li Pittard, 31, a Jewish poly activist from Seattle. “Judaism right now is very oriented towards having 2.5 kids, a picket fence and a respectable job. There’s not a lot of respect for people on the fringe.”

A former editor of ModernPoly.com, a nationwide polyamory website, Pittard has been polyamorous for 10 years and is currently involved with three partners — two men and one woman. She is a violinist and vocalist in a fusion hip-hop klezmer band, the Debaucherantes, and likes to engage in culture jamming, the mixing of seemingly disparate cultural elements. Combining polyamory and Judaism is one example of that.

“For me, polyamory and Judaism make a lot of sense together,” Pittard said. “When I’m singing niggunim or hosting people at my Shabbat table, it’s just another way of experiencing a connection with a group of people.” Pittard is frustrated by what she describes as a “white-bread,” conformist Jewish culture that refuses to accept polyamorous relationships. But some Jewish communities have been more accepting than others. “It’s easier to be open about polyamory at temple than it is with my professional colleagues,” said Rachel, a 28-year-old San Francisco business owner who asked that her last name be withheld. “My particular segment of the Jewish community likes me because I’m different and they accept that being poly is part of that.” Others are more conflicted about their polyamorous and Jewish identities. Ian Osmond, 39, a Boston-area bartender and former Hebrew school teacher who has been in a polyamorous marriage for 10 years, says he believes the rabbinic ruling that prohibited polygamy nearly a millennium ago has expired. Still, Osmond worries that his behavior is inconsistent with Jewish law. “I do feel there’s a conflict between polyamory and Judaism,” said Osmond, who is dating several women. “I feel that what we are doing is not supported by halachah.” Rabbi Elliot Dorff, rector of American Jewish University in Los Angeles and a longtime champion of gay inclusion in the Jewish community, draws the line when it comes to polyamory.

“First of all, the depth of the relationship is much greater if it’s monogamous,” Dorff said. “The chances that both partners are going to be able to fulfill all the obligations of a serious intimate relationship are much greater in a monogamous relationship. I would say the same to gay or straight couples: There should be one person you live your life with.”

But some poly Jews say they have pursued other relationships precisely because their partners were unable to fulfill all their needs. Izen began exploring polyamory because his wife has crippling migraines and other health problems that make sex impossible. Osmond did so because his wife is asexual.

“She’s just not interested in sex, and therefore it didn’t bother her if I was interested in sex and had sex with other people,” Osmond said. “Lis and I are comfortable with each other, and emotionally careful.”

For more than a decade, poly Jews have connected with one another on the email list AhavaRaba — roughly translated “big love” in Hebrew. The list’s 200-plus members come from across the country and use the forum to discuss jealousy, breakups, child rearing in multiple relationships and, in one case, a poly gathering in a sukkah. They also address the challenges of being poly in a community in which monogamy and marriage are still considered the ideal.

That tension manifested itself for Pittard in a recent discussion with poly friends who were considering attending a couples wine-tasting event hosted by JConnect Seattle, a networking site for Jewish young adults.

“We were talking and we said, well, does this also make you slightly uncomfortable, having to choose which of your partners to bring to something like this? Do you feel like if you showed up with both of your partners, or all three, they’d look at you weird?’ Pittard recalled. “A lot of people are closeted for fear of judgment.” Rabbi Sharon Kleinbaum, senior rabbi at New York’s gay synagogue, Congregation Beit Simchat Torah, says she tries to avoid that sort of judgment in her rabbinic practice.

Polyamory, she says, is a choice that does not preclude a Jewishly observant, socially conscious life.

“People make all different kinds of choices, and many choices have complex issues related to them,” Kleinbaum told JTA. “The important thing is for all of us to be asking ourselves hard questions about how to create non-exploitative, profoundly sacred lives within the different choices that exist.”

Poly Jews occasionally invoke the multiples wives and concubines typical of the biblical patriarchs as evidence that their relationships can indeed be sacred. But one poly Jew who asked to remain anonymous because of her connections to an Orthodox institution said those role models only go so far.

“I acknowledge that in some sense there’s an inherent conflict, there is a sense in which classical Jewishness is built in separation, reservation, the enforcing of boundaries,” she said. “I think there has to be some more work towards an authentically Jewish way of constructing the notion of polyamory beyond the superficial answer of ‘hey, that’s how they married in the Torah, right?’ ”

Polyamorous Jews Seek Acceptance of Multi-Partner Lifestyle — Even in Shul