My Return to Forgotten Czech Synagogue 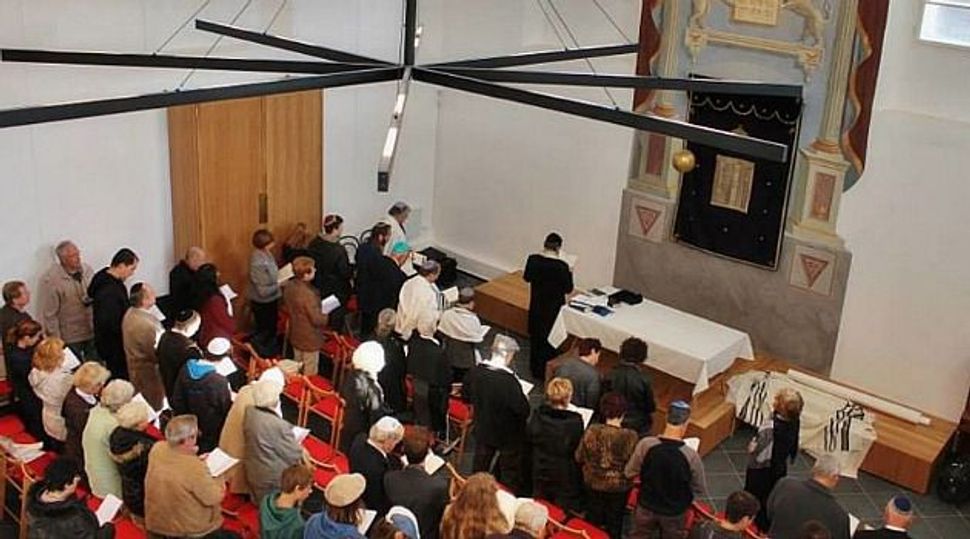 Prague is beautiful at all times of day, but especially in the morning when things are quiet and the sun is coming up. As we headed south, the road took us through a pastoral landscape of low, green, rolling hills fenced off into small farms with random clumps of forest here and there. Every few miles we passed a small village or could see one in the distance. Ckyne is about two hours south of Prague. We passed through Strakonice, once the fez capitol of the world.

As we approached Ckyne the hills got larger and steeper, the road curved more and the scenery became more green. We first passed through Volyne, a town that looked like it might have about 5,000 people. A few minutes and hairpin turns later we arrived at Ckyne.

The town was larger than we expected. We were told there were 3,000 people living there. Michaela stopped at a market to ask for directions to the new synagogue. Make a left and another left and you will see it. Sure enough, there it was, bright and shiny in its brand new white paint job.

We were early so I got to look around a bit. The building was immaculately restored. There was a small prayer room at the top, used when it was too cold downstairs. This will be the permanent home for the old torah they found in the attic. Downstairs in the main sanctuary, they have repainted as best they could the design they found for the are around the ark.

The place looks terrific, very comfortable. They built large cases on the side for exhibits about local Jewish history. They look like giant closets when closed up, really a terrific design and very practical, with shelves behind glass on top and pull-out drawers underneath.

The services began around 10 a.m. and lasted almost three hours. Over 100 people attended, far exceeding any expectations I had. There were representatives of other old Ckyne families: Wedeles, Wudl, Fantes, Sittig and Nathan and I represented the Blochs.

The services were led by a wonderful singer named Michal Foršt. He lives in Prague also acts as a cantor for the small congregation in Liberec (Reichenberg). Michael was wonderful, explaining and performing and reading in Czech and English, guiding everyone through a somewhat traditional service.

The old torah scroll found in the synagogue was used for the service, even though it is a bit damaged. One of the attended was Anna (Kineret) Sittig, a rabbi from Amsterdam. She was called into service to help with the torah, which was not rolled to the correct portion (Noah, near the beginning). I got up and helped her roll the old torah until we got to the right place. It was really very exciting because obviously the torah had not been used in about 100 years, since the community disbanded and sold the building (long before the Nazi era). And it was fun to think that probably our ancestors had used this very same torah.

Michal called Nathan up to do some of the prayers before the torah reading, and then Nathan was called for the first aliyah, the prayer before the first reading from the torah. Having Nathan there made everyone very excited, I think, because they all started to take photos. I couldn’t resist joining in. I put a video up on facebook of Nathan saying the prayer following the torah reading.

Julius Müller acted as gabay and helped figure out all the various people to call up for the remaining aliyot. A man from Germany, Hermann Löffler, who had helped support the restoration of the synagogue, was called asked to call out the names.

After Nathan, I came up, then the Sittigs and Wudls and also a friend of my fellow Geni curator from Israel, Rafi Kornfeld, was touring in the region and came to join us. The last aliyah was given to everyone in the community, so we all stood up around the old torah as Michal read from it to conclude the torah service.

The service was long, and with most of it in Czech or Hebrew, sometimes my attention flagged. At one point I actually got disappointed because I was missing the smell of an old building. I wanted some sense that the old congregation had been there. The place felt too new somehow.

After the service, many of us were invited by Jindra Bromova, the woman who organized the entire restoration project and this event, to the local hotel restaurant for lunch. Nathan passed on the trout, but I actually liked it even though I don’t ordinarily eat much fish. After lunch, we all went to the outskirts of town and climbed up to the old Jewish cemetery. It is on a hill enclosed by a high wall that has broken down in one place so you can easily walk in. The tombstones were recently cleaned (by Matana, I heard) and looked white and polished.

I could not find Rabbi Bloch’s grave, until I took out my blackberry and went to the Geni page and found a photo. I realized it was against a wall and then Alex Woodle showed me exactly where it was. Not with all the rest of the graves, but completely separate, along a wall about 10 yards away, his grave stood almost alone, lined up with some much later graves of children who had died young.

I did not understand this, since he died in 1850. Later I asked Achab Haidler, a wonderful man, and actor by profession, who has helped catalogue many Jewish cemeteries in the region, and he thinks the grave was moved, or perhaps the plaque with his name fell off and someone attached it to a different grave along the wall. He said he would investigate further. You can hear Achab on this video of the Ckyne synagogue. Achab can read all the tombstones, a very difficult task, and he even made a catalogue of the cemetery in Ckyne.

I should also mention Jan Podelsak, a local man who had been working to rescue the old cemetery and the synagogue for about 20 years. In fact, I recalled coming to Prague in 1996 and getting a poster about saving the Ckyne cemetery that he must have designed. Jan was clearly very moved by the tribute to him and seeing his long dream fulfilled. He is a local hero there in Ckyne.

We returned to the synagogue at 4pm for a concert led by Michal Foršt and his band of musicians from Prague. They began with a lengthy spoken introduction about my grandfather Eric Zeisl (whose grandmother was from Ckyne), followed by a performance of several of his works: Menuhim Song for violin and piano, Shepherd’s melody for Clarinet and piano and two songs for baritone (Ein Stundlein wohl vor Tag and my mom’s favorite Stilleben). This was well received and then followed by a very entertaining series of Jewish standards (Romania, Halavai, etc). Michal is truly a great performer (and he said he had a cold, but we didn’t notice at all).

The restoration of the Ckyne Synagogue was obviously a group effort with many people involved. Jindra’s business partner Vladimir Silovsky was extremely nice and showed me all the work that had been done. The mayor was there too, and Jindra said he had dedicated 1 million Czech crowns to the project (about $50,000), which is quite a large sum for such a small town.

Many people came from all over the region to attend the ceremony. An elderly Jewish woman, apparently the only one in the entire region, came to attend also. She showed me her mother’s Jewish star and other family documents. Apparently she had survived as a hidden child.

I met a British girl, Natalie, from Cesky Budejovice (Budweis) who came with some local friends of hers that she had met. A Czech-Swiss woman said she had read about it on the Internet and decided to come from Basel. There was a film crew and the rededication made the evening news in the Czech Republic.

We left just before Achab Haidler conducted a Havdalah service, because we had a two-hour drive back to Prague and both Nathan and I were exhausted. Michaela drove us back through the scenic villages and countryside to the shining lights of Prague, with its castles and churches all lit up against the evening sky. This has been an incredible trip for Nathan and for me, one that I am sure we both never forget.

I hope to return to Prague and the Czech Republic soon, to see all our friends and relatives, and to explore in more depth the home of 3/4 of my ancestors. I am coming away with a much better mental picture of the world that they lived in, and a real connection to their lives, which was my goal all along.

E. Randol Schoenberg is the President of the Los Angeles Museum of the Holocaust.

My Return to Forgotten Czech Synagogue