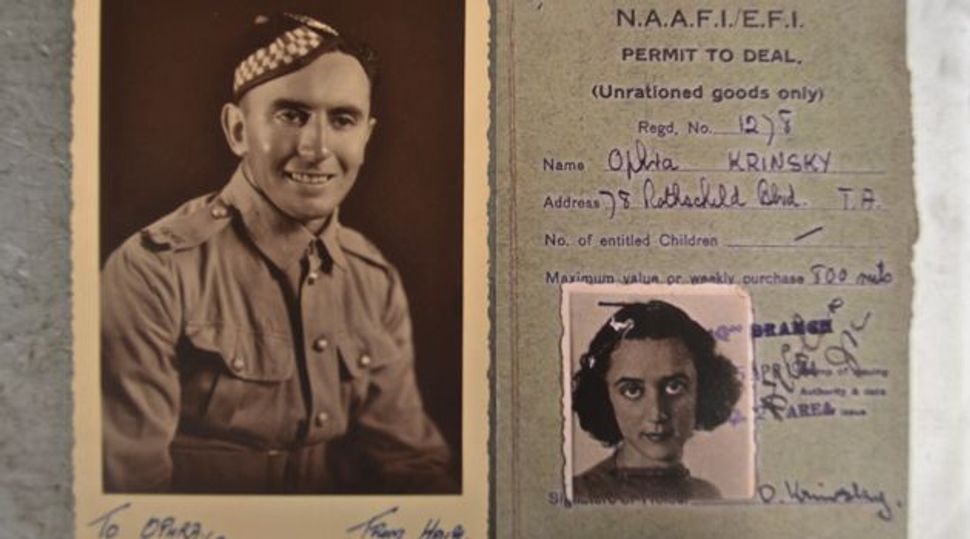 Inside the Trunk: Haig Kaplan sent a photo of himself (left) to Ophra Karin, whose picture appears on a British identification form along with her pre-Hebraicized married name, Krinsky. Image by Courtesy of Yosef Halper

While an abandoned suitcase on a Tel Aviv street corner is often cause for panic, when Yosef Halper saw a vintage leatherette travel bag on his commute home from his bookshop a few years ago, he turned around to investigate. “I used to be a compulsive garbage examiner,” he joked.

Inside, he discovered a “collector’s dream,” a perfectly preserved time capsule: over 500 delicately packed love letters with postage and the word “censored” stamped onto some of the envelopes. The postage stamps indicated that the letters were sent between 1940 and 1942, before Israel was a state.

“I was amazed,” Halper said, sitting in his eponymous bookstore, Halper’s Books, in the gentrified area of south Tel Aviv.

The letters, he would soon discover, made up the correspondence between a Jewish soldier, Lieutenant Haig Kaplan, a member of the Rhodesian regiment of the British Army who was stationed in Egypt and southern Palestine, and a Tel Aviv woman named Ophra Carsenty. (She now goes by Karin, a Hebraicized version of her married name, which is Krinsky.)

“I kept thinking to myself, ‘How am I going to find these people?’” Halper said.

About a week after finding the suitcase and reading through the majority of the letters, a South African couple stopped by Halper’s shop, which attracts a large number of expats because of the sizable number of English book titles.

Halper asked if they knew of a Lieutenant Kaplan who served in Palestine prior to 1948. As luck would have it, the couple knew Kaplan’s brother, who lived in the tight-knit community of neighboring Rehovot, only a few miles from Tel Aviv. They put Halper in touch with Kaplan’s brother, who in turn connected him to Kaplan, who was living in Bulawayo, Zimbabwe at the time. (Kaplan passed away five years ago.)

“He was shocked and very excited to speak with me about the letters,” said Halper. “He added a lot of information about his experiences.”

Karin, on the other hand, was much more difficult to track down. Halper enlisted the help of a Tel Aviv historian, who informed him that Karin had died. But the historian had the wrong woman; she was actually Karin’s sister. Then Halper happened to tell another bookstore customer — an Israeli journalist — about his quest, and the reporter tracked Karin down within 24 hours.

After speaking with Karin over the phone, Halper brought the box of letters, which he had meticulously organized according to date, to Karin’s home in Tel Aviv.

“It took me back to those times,” Karin told me when I visited her at home. At 94 she has the gentle bearing of an aristocratic woman, with beautifully coiffed hair, high heels and pearls. A true sabra, born in Tel Aviv, Karin is a fourth generation Israeli on her father’s side and a third generation Israeli on her mother’s side. She served in the air defense of the Civil Guard, an organization managed by the municipality of Tel Aviv, and she can clearly recall the celebrations in the street outside Independence Hall after Israel proclaimed statehood on May 14, 1948.

“When the letters were found, I was torn between the present and the past,” she told me. “But it’s history.”

We talked for over an hour about her memories of Tel Aviv during the 1930s and ’40s. Her family, the Carsentys, were one of Rothschild Boulevard’s early settler families, back when the famed thoroughfare was considered to be the outskirts of the city. Karin remembers the orange groves near the family home, which her parents built in 1928. She also recalls the Arab riots of 1929, and the Hagana outpost that was set up on the roof of the home to thwart Arab attacks.

Following the death of Karin’s sister, who lived in the second floor apartment of the family’s house on Rothschild, the house was sold and remodeled. The contents of the attic were left on the street by the day laborers, including the discarded suitcase, which contained letters, invitations to British balls, photographs and other mementos from the early 1940s.

“I was very surprised because I forgot completely that all the letters were at my sister’s,” Karin said.

Kaplan and Karin met when they were 21 and 23, respectively, at a tea party for Jewish soldiers hosted by a mutual friend from South Africa. They dated for two years during the British Mandate period and exchanged weekly letters.

“[Kaplan] used to come to Tel Aviv quite often, with or without leave,” Karin said.

Kaplan’s unit was primarily made up of the descendants of Scottish settlers living in Rhodesia, which is now called Zimbabwe. The unit’s military uniform was a Scottish kilt, which Karin makes mention of in the letters. (Halper shared an anecdote that Karin related about the kilt: one time Kaplan descended a ladder in a Tel Aviv bookstore in his Scottish apparel, showing Karin and her mother a bit more than they expected to see.)

Karin and Kaplan exchanged frequent letters, but with unpredictable wartime transportation and military censors, it would often take long periods of time for the letters to arrive.

“We were young,” Karin said. “We wrote about how we missed each other, how the days passed, when leave was expected.”

Kaplan wrote some of his letters in his tent by candlelight and sealed them with wax; he wrote others on scraps of paper, or whatever else he could find to write on.

“You see the schmutz,” Halper said. “There’s something about seeing the texture of the handwriting and being able to touch the paper that makes it special. That stuff just doesn’t exist anymore.”

What struck Halper the most as he was sorting through the letters was the pathos of the story: a young couple during wartime, the slow pace of correspondence, and the missed opportunities for connection.

“By the time a letter comes, months could go by and life happens in the meantime,” Halper said.

Kaplan was transferred to the Eighth Army of Lieutenant-General Bernard Montgomery in 1942. Montgomery was the general who lead the British forces, including the Rhodesians and South Africans in their greatest victories against the Germans in North Africa during World War II.

One of the last letters Karin received from Kaplan explained that he had not been in touch because he was too busy burning her letters after she informed him that she met someone else and was engaged to be married.

The two lost contact. After serving in North Africa, Europe and East Africa and helping to bring World War II refugees to Palestine, Kaplan relocated to a kibbutz, where he met his wife, a Holocaust survivor. The couple later moved to Rhodesia.

In 2008, 70 years after Kaplan and Karin met, Halper reconnected them. They were 87 and 89, respectively. The former lovebirds, both widowed, struck up a friendship over the phone. Kaplan’s son made photocopies of the letters and sent them to his father.

“Haig was moved as well,” Karin said. “He apologized for burning my letters and said he had done it on impulse.” I asked her why she decided to save hers. “I think that a written word has value — it’s different than a spoken word, it’s wrong to burn words written with emotion and meaning,” she said.

Then one day a couple years later, their communication abruptly ended. Kaplan’s sister called Karin and told her that Kaplan had died suddenly from a stroke.

“Even now when I reread these letters, they touch me. I feel very connected,” said Karin.

Abra Cohen is a journalist based in Tel Aviv.