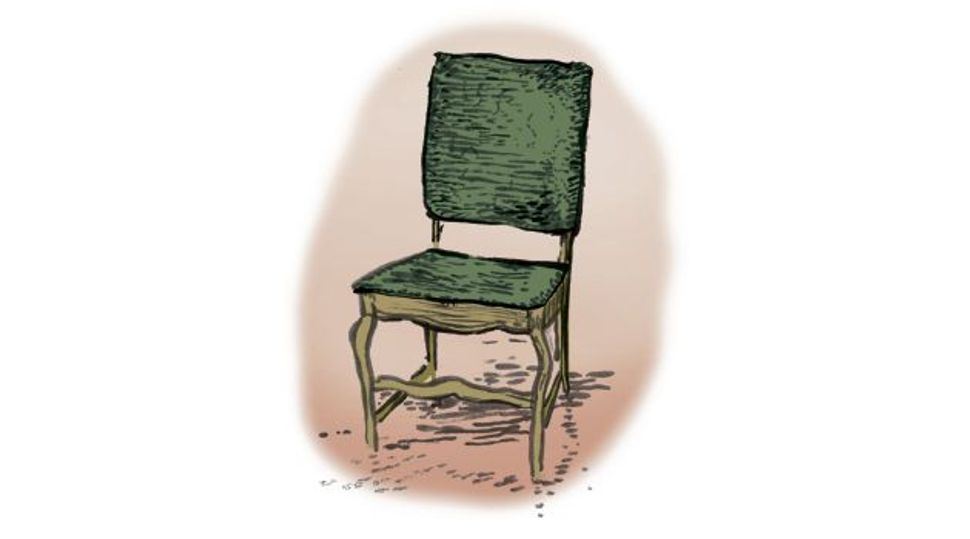 One of my mother’s favorite Yiddish proverbs was, “You can’t sit on two horses with one behind.” A fine observation, but growing up in Brooklyn, sitting on even one was unlikely. My own steed was the lid of a sewing machine, a rounded wooden case shaped like a covered bridge with curved corners. Heigh-ho, Singer.

As for places to sit, I mostly perched on the kitchen chairs in our two-family home on 58th Street. The landlords, my grandparents, lived upstairs and never raised the rent. The deal was that my mother would be nearby and available as her parents grew older.

There were four sturdy chairs in our kitchen, and four slightly different ones in my grandparents’ kitchen. On one of those chairs, my grandmother bent over that Singer, narrowing the legs of my dungarees and sewing aprons to be presented to my teachers as Christmas gifts, or practicing her signature on torn-off scraps of paper grocery bags. (She could neither read nor write.)

This was the ’50s. Families making the upwardly mobile leap from Brooklyn to Long Island were furnishing the kitchens in their split-levels with Formica and chrome, shiny mid-century splendor.

I was in elementary school when my mother brought up the notion of refurbishing the kitchen furniture. The response was certainly cool. My grandfather said that whatever was to be replaced was “good enough,” his typical rejoinder to any such proposal.

But my mother, the executive in charge of 58th Street home improvements, had clout. It had been she, after all, who had ordered the wallpapering of the kitchen ceiling, an endeavor deemed even more successful because the paperhanger had prophesied it wouldn’t last through the night. “Next morning, it was still there,” she liked to remind us.

After a few month’s discussion, my mother was taken seriously. The framework of the furniture was OK, but the wood was dark brown, mottled and rough. The seats, dark red plastic, were stretched and puckered in the middle, frayed at the corners, and dotted with cigarette holes left by a house full of smokers.

The search for someone to do the work began. The most desirable choice for an upholsterer and furniture restorer would be someone who was a cousin or brother-in-law of one of my grandparents’ synagogue pals. Such a person would be ashamed to do a bad job.

Family members, friends and even acquaintances would spread the word if the work turned out to be shoddy. A chair man — unaware, no doubt, that this job could make or destroy his reputation — was hired.

And then the most serious business of all: the materials. Various coverings were compared and contrasted. Warnings based on cautionary tales of my grandparents’ friends’ upholstery tragedies were recounted (“In summer, it stuck to her legs like glue”); utopian goals were offered (“It shouldn’t show the dirt”); and worst-case scenarios were summarized (“They threw their money out the window”).

And finally, it was decided: We were going with Naugahyde. My mother brought home armloads of sample books, crammed with patches in many colors and textures. But looks were secondary. The main qualification was that it should “wear like iron,” the highest compliment anyone in our clan could bestow, applicable to cars, shoes, kitchen appliances, wedding dresses, friendships, anything.

The restorer picked up the kitchen chairs and took them away. Impatiently, we sat around the kitchen on folding chairs brought up from the basement as substitutes.

When the chairs came back, the wood was amber-colored and glossy, the seats and backs covered in shiny forest green, stippled with wormy black lines. The seat surface looked something like avocado skin, something no one pointed out at the time because not one of us had ever eaten or even seen an avocado.

What we did eat was matzo, latkes, tuna fish, pot roast and Campbell’s tomato soup, meal after meal, year after year confirming the wisdom of the upholstery choice.

“They look like new,” it was said of the chairs.

My sister and I grew up and moved to California, leaving our parents and grandparents on 58th Street. Then my grandmother lost her memory, and shortly after that, her mind. Maggie, the aide who took care of her, sat in one of those chairs, too, having her dinner alone in the kitchen next to a forest of potted plants raised by the silent invalid who by this time never left her bedroom.

After both grandparents died, my parents sold their own kitchen chairs and moved to California with my grandparents’ chairs, because my mother thought their legs more graceful.

My father died a year after the move, but my mother lived another 32 years. She sat in one of the chairs every morning to read the newspaper, and every night to watch “The PBS NewsHour.” Her grandchildren, our sons, dribbled food on the chairs; my sister’s dogs licked them clean.

She was 93 when she suffered the stroke that left her unable to speak. She seemed happiest sitting in one of those chairs, relishing the familiarity of a shared lunch around a set table, a tangible reminder of her life in the kitchen. For a while, friends bearing bouquets and pound cakes came to sit, too. When she became both frail and volatile, they found it too depressing, and then they hardly came at all.

After my mother died, my sister took the chairs. But then my sister became ill, and late last winter, just as the first of the daffodils she had been sure she’d planted too early were pushing up, she died. Of everyone at 58th Street in the Naugahyde Era, I was the only one remaining.

My sister wanted my sons, her nephews, to have her things. So when they were in San Francisco for her memorial service, they chose what would go to Iowa, where our older son lives with his wife, and what would go to Brooklyn, where — much to the surprise of my husband and me, who spent our childhoods dreaming of escape from the borough — our younger son and his wife live.

The chairs are now about a mile from the house on 58th Street.

Just after movers picked them up, an upholsterer who had been recovering an office chair for my sister when she died, told me she’d told him that after the job was completed, she would ask him to “to recover some kitchen chairs, too.”

Among all the things that didn’t get said in time, didn’t get done in time, I don’t regret that the chairs never got recovered. Such a frivolous move, even after 60 years, would have been a rebuke to the decision-makers, who are all gone and replaced by memories of the things they said, the meals they shared.

Leah Garchik grew up in Brooklyn and is a daily columnist for the San Francisco Chronicle. She relishes occasional trips home.