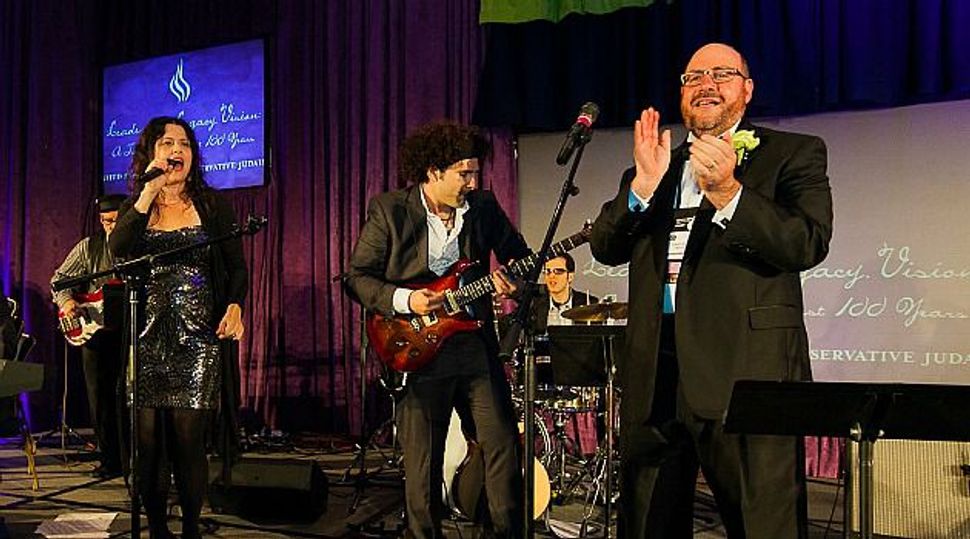 At the recent centennial celebration of American Judaism’s Conservative movement, the top issue on everyone’s mind was nowhere on the formal agenda.

But then, when leaders of the movement began planning the schedule for their conference months ago, the landmark survey of American Jews, released on October 1 by the Pew Research Center was still in the works.

The survey, which described in clear numbers how their movement, once the largest in American Judaism, now represents just 18% of American Jews, riveted the attention of virtually every attendee at the conference, held in Baltimore from October 13 to Oct 15.

From plenary sessions through breakout discussions to casual water cooler conversations, it was all about the Pew numbers. A festive event celebrating the United Synagogue of Conservative Judaism’s 100 years of activity was overshadowed by the fact that the movement is now at its lowest point.

“We have forgotten to lift up our eyes,” Rabbi Bradley Shavit Artson, chair of the rabbinical studies at the American Jewish University said in a keynote speech to the conference as he tried to raise the spirits of 1,200 Conservative activists that attended the centennial. “We have become a bit too defensive.” Artson urged fellow Conservative members to “lift up our eyes above the statistics.”

Dubbing their conference as a “restart moment” for Conservative Judaism, the movement’s leaders sought to break with the image of a top-down movement and turn the focus to activists on the ground and those activists’ suggestions for best practices for re-engaging young Jews in the centrist denomination.

“Historically, when Jewish movements were back against the wall, they learned to reinvent themselves,” said Jonathan Sarna, a professor of American Jewish history at Brandeis University. Such was the case with the Reform movement that reached a low point in the 1930s and climbed back by re-embracing tradition in its 1937 Columbus Platform, which supported the use of traditional ceremonies.

Similarly, said Sarna, Orthodox Judaism, which was seen as losing the young generation in the 1950s established a day school network and accepted the use of English in studying to win back followers. “There is a lesson here for the Conservative movement that it, too, can transform itself significantly,” Sarna said.

While the decline in affiliation was known for years, the recent Pew survey left no doubt about the seriousness of the challenge facing Conservative Judaism. It showed that the percentage of American Jews identifying with the movement has been falling consistently for the past two decades. The 18% affiliation rate for American Jews in general was not the worst of it. In the age bracket of 18–29, only 11% of respondents said they were Conservative.

“It’s a wake-up call,” said Al Kingsley, a lay leader from New York’s Forest Hills Jewish Center who attended the USCJ conference. “We realize that to be around in 100 years, we need to change.”

Counting heads, many speakers at the event said, is not the only measure of a movement’s success. But this argument, frequently invoked by Conservative leaders in the past, has fallen away, to be supplanted by a candid acknowledgement of the movement’s dwindling numbers as a problem, and by attempts to deal with its causes.

“It bothers me when our best and brightest leave our synagogues,” said Rabbi Harold Kushner a popular author of books on spirituality and theology in an October 13 address to the conference. “That concerns me more than anything else.”

Change was the keyword at the conference. But the focus was more on opening the discussion than on adopting specific guidelines or ideas to make the change happen.

“There’s a lot that needs to be fixed, readjusted and tweaked,” said Rabbi Steven Wernick, USCJ’s CEO in the October 13 opening plenary. The goal, he declared, should be to “rewrite our narrative from decline to renewal.” And in order to do so, Conservative Judaism is looking for ways to open its ranks and engage its members.

“Let’s all stand up and stretch,” called out Arnold Eisen, chancellor of the Jewish Theological Seminar, the Conservative movement’s rabbinical seminary. “Let’s wake up.” Addressing the hall full of rabbis, cantors and synagogue activists rising from their seats in the conference room and stretching their arms in the air, Eisen tried to use the moment as a metaphor for the direction the movement needs to take. It was all about stretching out beyond the confines that have defined the Conservative denomination, he argued. “We need to stretch our boundaries wider,” Eisen said. “The way to grow Conservative Judaism is to reach beyond us and bring more Jews.”

The perceived narrowness of the Conservative movement, manifested primarily by its response to intermarriage, is viewed widely as a key to understanding the movement’s decline.

“It is perfectly clear that the Conservative movement lost a lot of people to Reform because intermarried Conservative Jews no longer felt comfortable in Conservative synagogues,” Sarna said.

The movement has made great strides in recent years in addressing this issue. It has, among other things, adopted an approach that welcomes intermarried families to the synagogue but draws a clear line of not accepting intermarriage and of refusing to allow its rabbis to officiate at weddings of couples with one non-Jewish spouse.

This policy is not about to change, but Conservative leaders and members said the movement should be more proactive in reaching out to intermarried families and embracing them. “Non-Jewish partners who take their kids to Sunday school should be treated as heroes, not as problems,” said Rabbi Adam Greenwald, who teaches conversion classes at the American Jewish University, in California. He compared the approach of community members who refuse to accept the fact that intermarriage exists to those advocating abstinence-only sex education: “The problem is, it doesn’t work.”

Suzanne Litke, a lay leader at Temple Beth Zion —Beth Israel, in Philadelphia, said her community “works hard to be welcoming, but any institution can do more.” She noted the need to spread the word that Conservative Judaism is more inclusive than people think. “We can do more in letting people know we are welcoming,” she said.

Another strategic direction discussed at the USCJ conference was reaching out to the community within and outside the walls of the synagogue. The goal, as noted by leaders at the event, was to put an end to the notion that Sabbath morning services are the main, and at times the only, opportunity to connect with the community.

“One of the first things I’ll do when I go back is to meet with my staff and see how we can step outside our institutional structure and get in touch with people,” said Rabbi Andrew Warmflash of the Hewlett-East Rockaway Jewish Center. Phoning members and chatting is the form he believes could work best.

For Debbie Albert of Temple Sinai, in Dresher, Pa., outreach to the community meant establishing “Guess Who’s Coming for Shabbat,” a program in which community members invite friends from the community for Sabbath dinner.

Rabbi Daniel Cotzin Burg of Beth Am synagogue, in Baltimore, started a series of Saturday night concerts hosting local musicians, an event geared for the broader neighborhood community, not necessarily for Jewish members. “I’m not afraid to soften the boundaries,” he said, noting that in the concert intermission, a tour of the synagogue sanctuary is offered.

But boundaries, as Conservative activists have learned, still creep up. Albert was faced with the question of observing kosher laws in the Sabbath dinners organized by families in the community. Should the synagogue demand that all those hosting the events keep a kosher home? “I asked my rabbi, and he said, ‘What happens in Vegas stays in Vegas,’” Albert recalled, paving the way to a broader community-based participation. “I’ve been shocked by how we’ve broken down barriers,” she said.

The ideas thrown into the air during the USCJ three-day conference all amount to a broader effort to reinvent the Conservative movement and to make it more attractive. But as activists and scholars noted, the denomination could also be facing a broader problem: the shift away from centrism and toward ideologies that take a clear, binary approach on the central issue of Halacha, or Jewish religious law.

Such is the case with national politics, as well as the problem facing some mainstream Christian denominations.

“People are looking for movements that are more black and white,” Warmflash said. “We are more gray.”