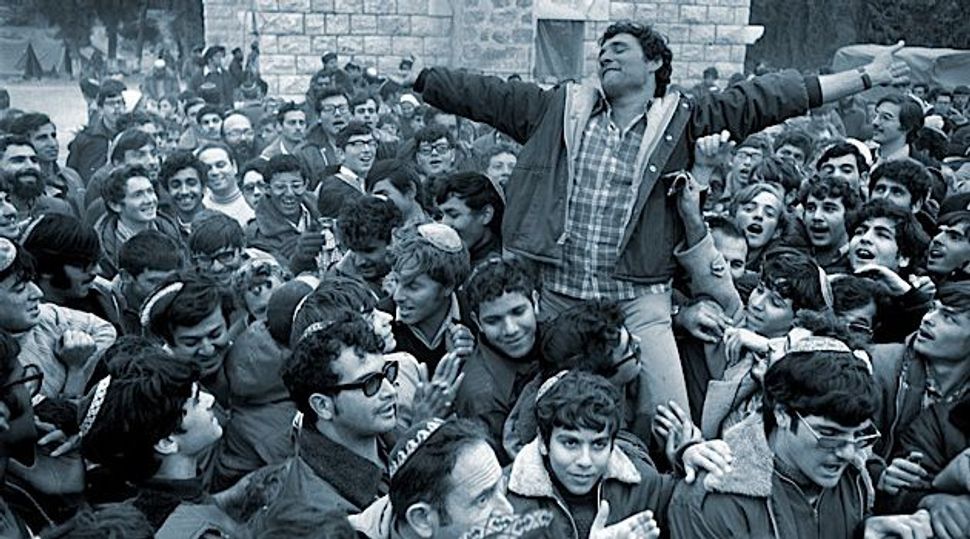 Enraptured: Supporters carry Hanan Porat as they celebrate the government?s agreement in December 1975 to allow the first Jewish settlement in the northern West Bank, at the Sebastia railway station. Image by Getty images

Yossi Klein Halevi’s new book, “Like Dreamers,” is about seven of the paratroopers who reunited Jerusalem during the Six Day War in 1967. It is their story and Israel’s story in the years that unfolded. In this excerpt, the first of two being published by the Forward, two of those paratroopers, Hanan Porat and Yoel Bin-Nun, future leaders of the settler movement, are mystfied in the months after the war by a victory that feels divinely ordained. They are both members of the Mercaz, a Jerusalem yeshiva run by Rabbi Yehudah Zvi Kook, known as the epicenter of religious Zionism. In those tumultuous days, Porat’s attention turns to the restoration of the lost village of Kfar Etzion in the southern West Bank. Evacuated in 1936 after the Arab uprising, and then again in 1948, following a massacre of 157 of its residents, the village became a symbol of a return and reclamation of the land.

Several dozen students, many sitting on the floor, crowded into the rabbi’s small salon. Tape remained on the windows, a wartime precaution against blasts.

Hanan Porat broke the silence. “Rabbeinu” — Our rabbi and master — he said, “hasn’t the time come to study the laws of the Temple?”

For a religious Jew who prayed three times a day for the Temple to be rebuilt, that was not an unexpected question in the summer of 1967.

“Hanan,” replied the rabbi enigmatically, “we will be learning the laws of war for many years to come.”

“But the Temple Mount is in our hands!” protested Hanan.

“Hanan,” he repeated, “we will be learning the laws of war for many years to come.”

But Hanan is right! thought Yoel. This is the time! Any generation of believing Jews would have known how to read the signs. Redemption was the heart of Judaism: a holy people consecrated to a holy land, at its center a holy city and a holy mountain — a tactile sanctity, because redemption must happen in this world. And now, in six days of re-creation, all that had been broken, had been made whole. Surely even the most stubborn skeptics would now understand that God was in this story.

The Mercaz study hall filled with hundreds of celebrants. Rabbi Zvi Yehudah had summoned an “Assembly of Thanksgiving,” and the yeshiva’s dining room, which had accommodated the crowds for his Independence Day speech, was hardly adequate now. On the dais sat the president of Israel, Zalman Shazar. In the front row sat the novelist and Nobel laureate Shai Agnon.

Mercaz — “the center” — had finally fulfilled its ambitious name. From the beginning of the crisis, which Rabbi Zvi Yehudah had seemed to intuit in his Independence Day speech, to the war’s astonishing culmination, when he was one of the first civilians at the Western Wall, Mercaz had been central to the greatest moment in Israel’s history.

Mercaz felt vindicated in its most daring theological premise: that secular Zionism was a trustworthy repository of the redemptive process. The secular state that had tried to sever the people of Israel from the God of Israel had instead confirmed faith. For Mercaz, the kibbutznik paratroopers at the Wall were a revelation. Who could have imagined kibbutzniks praying at the symbol of piety and exile?

Rabbi Zvi Yehudah entered the study hall. Students held each other by the shoulders and danced before him. “Raise your heads, gates,” they sang, “and admit the glorious King.”

The rabbi spoke from a lectern draped with an Israeli flag. In covering a lectern that held holy books with the flag of secular Israel, Rabbi Zvi Yehudah was saying: This flag is no less holy than the velvet cloth covering the Torah ark behind me. On the wall hung a banner that read, “May the Temple be rebuilt, speedily in our time” — prayer turned into demand.

Voice strong, tone defiant, the rabbi warned the world not to interfere with God’s plan and try to wrench the liberated lands from Israel’s control. Not even the democratically elected government of Israel, he continued, had the right to withdraw from the territories — a warning aimed at the Labor-led national unity government, which declared its willingness to exchange territory for peace.

Hanan Porat approached the lectern. Broad-shouldered and powerfully handsome, with a wave of brown hair, he projected far beyond his short stature. Of the dozen paratroopers in Mercaz — who were holy, Rabbi Zvi Yehudah liked to say, only half joking, because they descended from heaven like the Torah at Sinai — the rabbi especially loved Hanan, heir of Kfar Etzion.

Hanan embodied the Mercaz synthesis of yeshiva student and sabra, spirit and matter. And now Hanan carried the additional aura of the Six-Day War’s most heroic battle, Ammunition Hill, where paratroopers had fought face-to-face with Jordanian soldiers in the trenches. Hanan happened not to have actually fought in the trenches and had seen little fighting during the war, all of which Hanan acknowledged. Still, for young religious Zionists, Hanan was a hero.

In his permanently hoarse voice, Hanan read a poetic account of a journey he’d recently taken to Kfar Etzion, this time in the company of friends. A middle-aged man, one of the few survivors of the massacre, ran atop the bunker where the last of Kfar Etzion’s defenders had died and began pounding with a pickax.

“It was as if he were trying to signal to someone down below. And a faint echo from the void seemed to respond: ‘I am still alive, where are you, my friend? Respond, give me a sign!’”

The president of Israel stood and kissed Hanan on the forehead.

Hanan mailed out a questionnaire to the children of Kfar Etzion: Are you prepared to return? And if so, what kind of settlement should we create? A kibbutz or a noncommunal village? A community only for the Orthodox, or open to everyone?

A dozen friends affirmed their readiness to “go up” and settle. “I don’t care what will be established there,” one wrote. “Even if it will be a yeshiva, you can assign me the job of janitor.”

But when they gathered together for a planning session, tensions emerged.

“What if the government doesn’t agree to our return?” a friend asked Hanan.

“We go up anyway,” Hanan replied. “Let’s see them removing us!”

“We’re returning home in memory of our parents,” his friend countered. “If we go up without authority, we will desecrate their memory.”

The deeper tension within the group was about whether the return to Kfar Etzion was a personal act of restoration or, as Hanan insisted, a national act with messianic implications. The resurrected Kfar Etzion, he told his friends, would be the first of many settlements in Judea and Samaria. They were blessed to be the avant-garde. And in restoring the wholeness of the Holy Land, the world would be healed, redeemed.

Listening to Hanan, one of his friends thought: He can only see the return in abstract terms because he’s not an orphan like us.

They argued about whether the new Kfar Etzion should be a kibbutz like its predecessor. Hanan wasn’t sure: a kibbutz, with its limited size and screening committee for applicants, would absorb at best a few hundred people, when the goal should be to attract thousands. A kibbutz, he said sarcastically, isn’t a mitzvah from the Torah.

‘I need your help,” Hanan said to Yoel over breakfast of white cheese and olives in the Mercaz dining room.

“When we return,” he continued, “I want us to have a yeshiva. Kfar Etzion can’t just be a place of physical renewal. There has to be a light emanating from it to the people of Israel.”

“I’m with you, Hanan,” said Yoel. “What do you need from me?” “I want you to come and teach.” Yoel mentioned Hanan’s offer to his fiancée. Esther Raab’s father had been among those taken prisoner by the Jordanians in 1948 from a kibbutz near Kfar Etzion. “Returning to the Etzion Bloc,” said Esther, “is the dream of my life.”