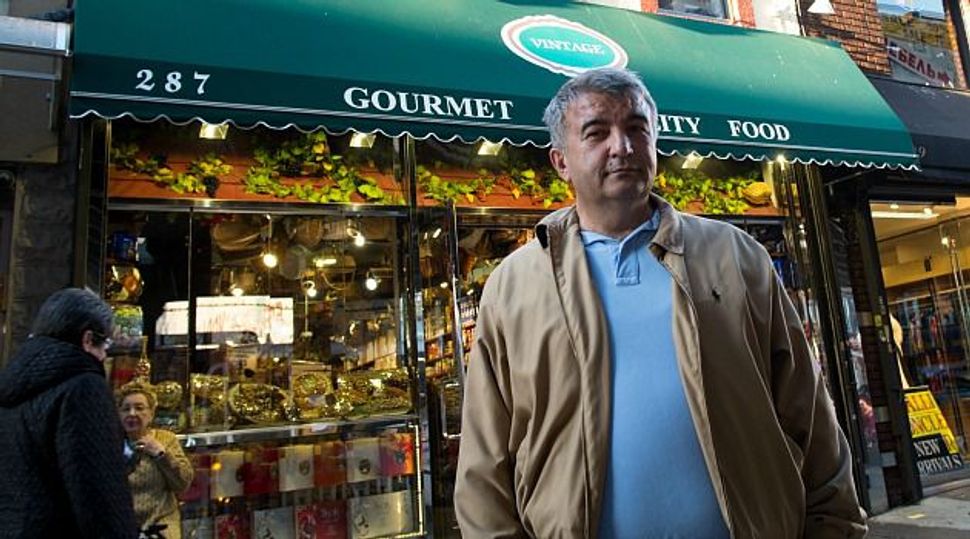 Punch in the Gut: Yuksel Pece?s gourmet store lost $15,000 in inventory when Superstorm Sandy struck. That turned out to be only the tip of a devastating iceberg for him and other Brighton Beach merchants. Image by claudio papapietro

On a warm Saturday in early October, Emily Axelrod subtly smiled as she surveyed the calm ocean off Brighton Beach, a heavily Jewish neighborhood in south Brooklyn.

“Now it’s gorgeous,” the 66-year-old Ukrainian immigrant said as she strolled down Riegelmann Boardwalk. But life was dramatically different a year ago, when Hurricane Sandy hit. The Oct. 29 storm ravaged 14 miles of New York City beaches, ruined businesses and homes and left thousands seeking shelter. “It was terrible,” said Axelrod. “You wouldn’t recognize this place. It was like after a war.”

Axelrod, who lives in nearby Sheepshead Bay, fared better than friends in Staten Island whose possessions were totally ruined by the seawater that flooded their homes. Yet she did experience four difficult days. “There was no electricity, no elevator. It was very bad for old people. No home phone, no cell phone, no TV,” she said, basking in the low sun on a boardwalk bench with her husband and an elderly relative from Riga, Latvia.

The basement of Vintage Food, blocks away on bustling Brighton Beach Avenue, also flooded. According to manager Yuksel Pece, the store was forced to throw $15,000 worth of inventory into the dumpster. Yet the international emporium was able to open within a week, after a friend brought over a generator. Soon the store was serving hot tea, sometimes giving it away. “They could not make it at home,” Pece said, adding that the store allowed some people to buy on credit during those difficult days, even as the business was literally rebuilding its foundation.

“I don’t know of one business not affected by the hurricane,” said Yelena Makhnin, executive director of the Brighton Beach Business Improvement District. She calls the local merchants “very hard working” and not in the habit of waiting around for help. “That’s not the Brighton Beach story.”

“I came to Brighton Beach October 30 at 7 a.m. [the day after the storm] and people were already pumping out water from their businesses,” Makhnin said. Lower levels of the many shops on Brighton Beach Avenue are used to store equipment and dishes, and prepare food. “Everything in the basement became garbage,” she said. Makhnin added that many business owners remain deeply frustrated by insurance companies, which did not reimburse them for the damage.

On the surface, Vintage looks jam-packed with customers who queue up for California pistachios, Turkish candies, coffee beans and Brooklyn-baked pita and Barbari breads. But Pece says profits are down 60%; Sandy teamed up with a wobbly economy to create a perfect storm, one which continues to have an impact on the neighborhood.

At Gold Label International Food, also on Brighton Beach Avenue, small, dark loaves are flown in from Latvia, and Russian-speaking staff slice a seductive array of European cheeses, sausages and salamis. The delicatessen’s manager said they were closed for two weeks after the storm damaged their downstairs, but demand for chicken Kiev, stuffed peppers and cabbage, pickles and house-baked cakes is as high as it was before Sandy.

Farther along Little Odessa’s main shopping strip, employees at a produce market say they lost all their fruits and vegetables during the storm and had to completely replace refrigerator cases and restock every onion, grape and carrot. Today the corner spot swarms with savvy customers who frown when asked about the storm, though one man pointed to his knees to demonstrate how high the water rose. Asking where the apples or cucumbers were grown provoke only a shrug from sellers and shoppers; these days everyone appears more focused on price than provenance or on Sandy’s approaching anniversary, which they’d rather forget.

New York City’s Small Business Storefront Improvement Program is currently accepting grant applications from storm-impacted areas such as Brighton Beach; it will be able to provide 50 merchants with up to $20,000 apiece to rebuild their businesses. Immediately after the storm, the city offered low-interest emergency loans with matching grants; 56 loans were approved in Brighton Beach and Manhattan Beach totaling more than $1.2 million. Still, with the summer rush over and beaches officially closed, business owners wish more people would recognize the year-round appeal of Russian restaurants, excellent food shopping and old world, arm-in-arm strolling.

On a recent Saturday, half of Cafe Restaurant Volna’s boardwalk tables were filled for late lunches. A mix of guidebook-toting tourists, ethnic families celebrating special occasions, and New Yorkers (including guitarist Lenny Kaye, best known as a member of the Patti Smith Group) were people-watching and enjoying the ocean air, noshing on borsht, beef stroganoff or smoked fish, and sipping beer and vodka.

Locals flock to an al fresco nook owned by and adjacent to Tatiana Grill for open-face sandwiches and $4 plastic tumblers of Smirnoff chased with cranberry juice. This casual counter was able to open long before Tatiana’s two restaurants following Sandy because its simple operation is upstairs and was relatively unscathed, while the larger Tatianas’ kitchens had suffered considerable damage. Today the lunch specials lure hungry joggers, bicyclists and fishermen with a $15 prix fixe of soup and stew, and pelmini or crepes.

After Sandy, Brighton Beach’s boardwalk was covered with sand drifts. The beach collected trash, including refrigerators and couches that were swept away from decimated houses. The New York City Department of Sanitation gathered more than 200,000 cubic yards of displaced sand, which was cleaned, sifted of debris and then returned to borough beaches. Steeplechase Pier on Coney Island was completely rebuilt and only reopened this October. The main comfort station and stone gazebo (where backgammon is played, regardless of the weather), near Brighton 4th Street, stood up to the storm’s wrath. Yet a pair of new, raised, modular lifeguard stations are a permanent reminder that structures in flood zones need to be upgraded.

Immediately after Sandy hit, the Shorefront YM-YWHA on Coney Island Avenue transformed into a relief center. Donations poured in and storm victims dug through boxes of clothing set out in front of the building. The Shorefront’s website cites almost 1,000 volunteers who have reached out to isolated residents, and the distribution of 3,500 electric heaters, 62,000 blankets and 22,000 food packages to the homebound elderly.

Days following the storm, the first street parallel to the beach, Brightwater Court, was piled high with black garbage bags and discarded furniture awaiting pickup by sanitation trucks that struggled to keep up with demand. Now the FEMA trailers are gone, the thoroughfare cleared.

Pece says some people are scared to stay put and prefer to move to higher ground.

Axelrod, too, fears another hurricane hitting Brooklyn. “Of course I’m afraid, but what can I do. I’ve lived in this apartment for 20 years.”

Lisa Amand is a James Beard Award-winning writer. Find her on Twitter @Imnofoodie