Yeshiva U. Victims Stare Down School’s Lawyers in Showdown Over $380M Suit 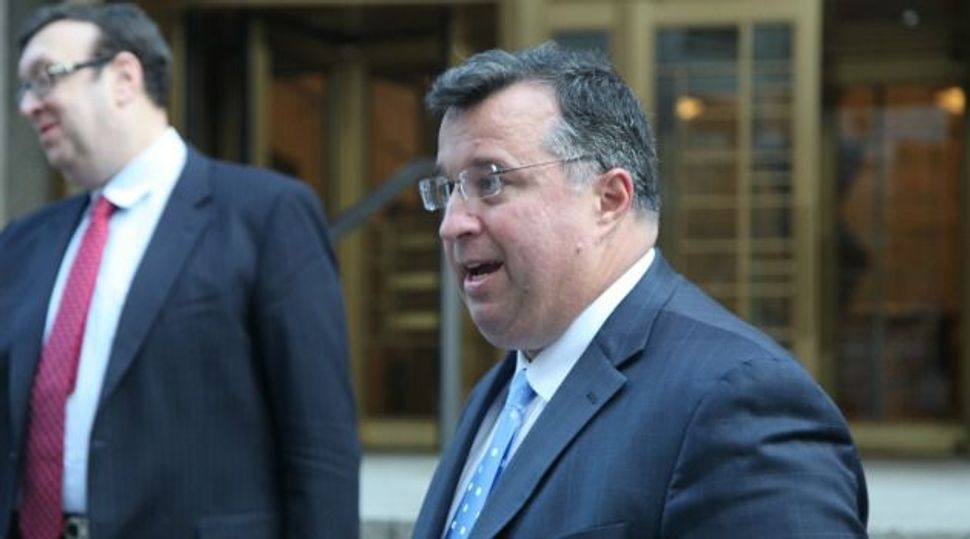 It was a landmark moment in the long-running Yeshiva University sexual abuse case. For the first time, former Y.U. high school students who say they were abused confronted lawyers for Y.U. in court as their attorney argued against a motion to dismiss their case.

Flanked by family members, about a dozen of the former students filed into the Manhattan courtroom on the afternoon of October 27 to witness arguments that hinged on one key point: Should these students have filed suit decades before the Forward published its first article about their abuse, in December 2012?

Y.U. lawyers said the students, who were abused during the 1970s and ’80s, should have launched their own investigation or reported their abuse to the police before the statute of limitations expired. In New York State, child victims of sexual abuse have until they turn 23 to report abuse.

Kevin Mulhearn, who represents 34 former Y.U. high school students, including all those present in court, said that because Y.U. ignored student complaints and maintained that George Finkelstein and Macy Gordon were men of good character — even after the university was warned of abuses — the students had no way of knowing that they had a chance of bringing a successful claim.

Some of the men, who were mainly in their 40s and 50s, looked tense. At least one former student flew in from Florida for the two hours of oral arguments.

Karen Bitar, a lawyer representing Y.U., said she wanted to make clear that “we do not think these allegations are in any way insignificant, unimportant or unserious.”

But, Bitar added, the allegations took place at a time “when the [mores] or what was deemed typical or appropriate was much different than what it is today.”

She said the case should be dismissed based on the statute of limitations because it was unfair to expect Y.U. to defend itself after such a long passage of time, with the fading of memories and when some defendants are dead or no longer able to testify.

Bitar said the former Y.U. students knew they had been injured immediately after they were assaulted, and they knew that their abusers were Y.U. employees, “yet they waited 20 to 40 years to act.”

United States District Judge John G. Koeltl interrupted Bitar to note that in the Poly Prep case, the school falsely told at least one student that it had investigated claims against the staff member and found them to be untrue. Koeltl noted that in the claim against Y.U., as in the Poly Prep case, there were also instances of students who alleged they had made timely complaints to the school.

The Forward’s first article about abuse at Y.U. was referenced several times during the arguments.

Koeltl dismissed such statements as hearsay.

The former students argued in court filings that their claims fell under Title IX, anti-sexual discrimination legislation that has been interpreted by courts to include sexual harassment and abuse of students.

When it was Mulhearn’s turn to speak, he said that his clients’ case was about whether the court was “willing to hold a school responsible for 25 to 30 years of cover-up.”

Mulhearn said that Finkelstein would take “defenseless boys,” and pin them to the floor, “where they couldn’t move, and proceed to hump them in the backside with an erect penis until he achieved climax.” Finkelstein ordered the students not to tell their parents, Mulhearn said. “Nothing was done about Mr. Finkelstein until 1995, when he was finally, quietly fired,” he added.

To show how difficult it was for the former students to realize the extent of the cover-up, Mulhearn gave an example of one Y.U. victim, John Doe XX, who was abused between 1983 and 1986.

Mulhearn said that John Doe XX had no way of knowing that three students reported Finkelstein for inappropriate sexual behavior to Rabbi Norman Lamm, Y.U.’s then president, between 1983 and 1985. Further, in 1985, Y.U. named Finkelstein “educator of the year” and in 1988 promoted him to principal.

Mulhearn said that by the time John Doe XX reached the statute of limitations, in 1989, he believed Y.U. saw Finkelstein as an “exemplary educator.”

Mulhearn said that the former students had been prevented from filing a Title IX claim because such A claim requireS a plaintiff to prove that “an official with high-ranking authority had actual knowledge and acted with deliberate indifference.” Such knowledge was apparent only after the first Forward article was published, and the statute of limitations started running only at that point, Mulhearn said.

In the coming months Koeltl is expected to issue a ruling on whether the case will be dismissed.

Yeshiva U. Victims Stare Down School’s Lawyers in Showdown Over $380M Suit