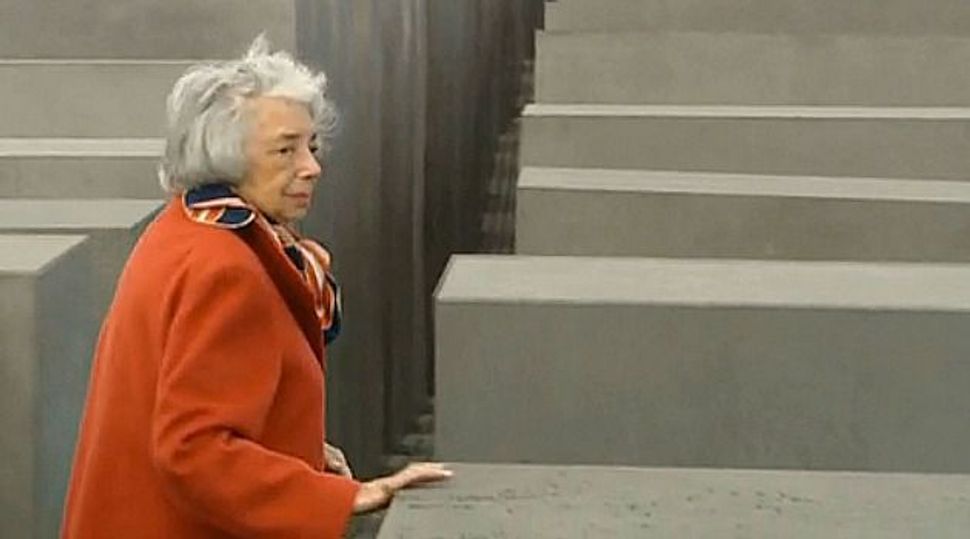 By moving back to Berlin three years ago, Margot Friedlander, a 92-year-old Holocaust survivor, has become an unlikely celebrity in the land where she was once persecuted.

In 1946, when she immigrated to New York with her husband, they both vowed never to set foot again in Germany. Most members of both their families were murdered at Auschwitz.

But today, Friedlander said, young Germans tell her that what they get from being in her presence is different than what they would from any teacher or book. “Because my story is from my heart,” she said. “It’s my story. I speak for the people who can’t speak anymore.”

When Friedlander made the final decision to live in Berlin, her German-Jewish friends in New York tried to dissuade her. How could she return to a place whose inhabitants had murdered so many Jews and all their loved ones?

Friedlander was 21 when the Gestapo came for her family. She escaped and remained in hiding in Berlin for 13 months. While hidden, she dyed her black hair a brownish orange and wore a crucifix. She had to change hiding places frequently to avoid detection. The moves were often on streets darkened because of Allied air raids. She was never to ask the names of those who hid her, nor where they lived. Her protectors feared if the Nazis caught her, she would expose the underground network.

After emerging from a bomb shelter in April 1944, she was apprehended and questioned by the Gestapo. She admitted she was Jewish and was sent to the Theresienstadt Concentration Camp in what is now the Czech Republic.

It was in Theresienstadt that Friedlander met and married her husband. They were married in a traditional Jewish ceremony after the Russians liberated the camp. A short time later they came to New York and took up residence in Queens. Her husband became the comptroller at the 92nd Street Y, and she worked for a travel agency. The two never had children.

When Friedlander’s husband died in 1997, she tried to cope with this loss and find new meaning in life by taking classes at the Y. One of these was a memoir class.

“I wrote every night,” she recalled during an interview in her apartment in a high-end Berlin senior residence. Geraniums adorned the apartment’s balcony. Below the apartment complex was a kindergarten, a tableau of hope for the future. “I had all these stories in my head. Everything started coming back to me, many things that I pushed aside for years.”

It was this effort that ultimately provided the catalyst for Friedlander’s return to Germany.

German documentary producer Thomas Halaczinsky, who lives in New York, heard Friedlander read from her memoir at the Y. “It was very interesting and important,” he said in a phone interview. Halaczinsky wanted to do a documentary about Friedlander’s life, which required that she return to Berlin.

In 2003, when she was 82, Friedlander agreed in spite of her long-held conviction, shared with her husband, that they would never return. Halaczinsky recalled their first night in Berlin. “We did a lot of walking throughout the city,” he said. “She knew every shop that was ever there and every street corner. It was as if she never left.”

The experience of filming the documentary in Berlin made Friedlander think about returning permanently. “I felt I was home again,” she recalled.

Halaczinsky’s documentary, “Don’t Call It Heimweh,” premiered at the Woodstock Film Festival in October 2004. “Heimweh” is roughly translated as “nostalgia.”

In 2008, Friedlander’s memoir was published in German and received the prestigious literary Einhard-Preis, given for biography and autobiography. Its title — “Versuche, dein Leben zu machen,” or “Try to make a life” — are the words of her mother’s last message to her.

Friedlander was 21 years old when the Gestapo came to arrest her family. Her brother, Ralph, was 17. She was not home when the Gestapo came, but returned while they were still there. When she saw them outside, she covered her Jewish star and passed the guards as if it were not her home.

She went instead to a Jewish neighbor who imparted her mother’s message — that she should “try to make a life.” The neighbor also had her mother’s purse containing an address book and an amber necklace that Friedlander still wears.

She reminisces about her younger brother. “He was a math whiz and played the violin at seven,” she said.

Friedlander regularly tells her story to German teenagers. “I want them to know how I felt, what I was thinking, what happened in the house when the Gestapo came for my brother,” she said. “The feeling of a human being who has experienced this — that is what I want to impress on them.”

Through her return here at age 89, Friedlander has discovered her vocation. “There is something to be done here,” she said, adding that the third generation had nothing to do with what happened.

Friedlander also points out that 16 Germans helped her hide for 13 months, while risking their own lives. “I had Germans who helped me,” she said. “They did not know me. I was cared for by good people, even though they were few.”

Friedlander could find only one of these righteous Germans. In 2003, she visited Gretchen Camplair in a Berlin hospital and thanked the dying woman, while stroking her hands.

Friedlander continues to battle the demons that haunt many Holocaust survivors. Why have they survived when their loved ones perished? To justify her survival, she clings to her mother’s message that she should make a life. “I did what my mother wanted me to do,” she said.