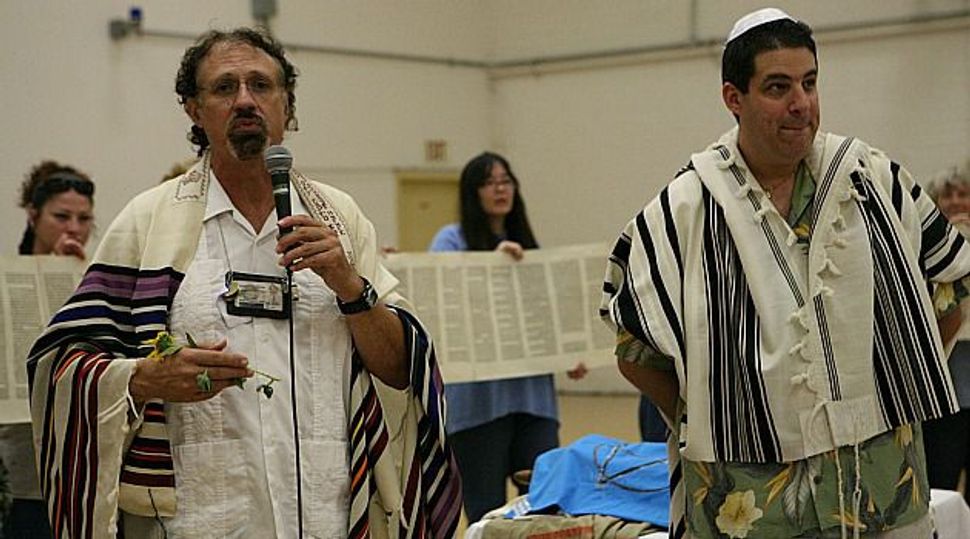 Joseph was lying on his bunk, looking at the Hebrew blessings he’d hung on the wall to celebrate his first Hanukah in prison when his new, neo-Nazi cellmate was brought in.

The man sported a large swastika tattoo on one arm, with Adolf Hitler’s face drawn in the center. “Skinhead” was tattooed across his chest in five-inch letters.

As the man glanced at the Hebrew posters and then went into the bathroom to remove some contraband, Joseph knew he had to act quickly.

Later, Joseph learned that the man, who’d led a gang of skinheads in prison, had beat up Jews and “other non-whites” to within an inch of their lives.

Joseph, who asked that the Forward use only his middle name, had later run-ins with anti-Semites that went less happily during his three-year stint in California’s state prison system. As his circle of Jewish friends grew and they became a presence on the prison yard, both the Protestant chaplain and the leader of the black Muslim inmates became very aggressive.

At one point the two of them threatened Joseph’s life after inviting him into the chapel to talk. On Yom Kippur, when it seemed that they might carry out their threat, only the intervention of a powerful Muslim friend on the yard saved Joseph from a severe beating.

Joseph’s experiences illustrate a paradox of Jewish life in many of our nation’s state prisons: anti-Semitism is endemic, but personal relationships often transcend it.

In prison trust is one of the scarcest commodities. Anything that marks an inmate as different is ground for suspicion. In many parts of the country inmates consequently stick together by race and religion, splintering into dozens of affiliation groups. Inmates of the same race spend most of their time in de facto segregation, eating, sleeping, and hanging out only with each other.

Being Jewish is a mark of difference to most non-Jews, and is viewed as a major point against the inmate so labeled, according to interviews with Jewish ex-inmates. But even where anti-Semitism is extreme, Jews can often gain respect and safety by “keeping face,” as one former inmate put it — being honest with other prisoners, and refusing kowtow to others. Being as good as your word and standing up for yourself is the path to safety through friendship in the deeply violent and uncertain world of prison.

“Being Jewish… automatically means you need to be on the defense per se, because you’re a minority,” said Steven Strauss, who grew up Orthodox and spent most of the last 19 years in prisons in Washington and Alaska.

For Xhevahir Ajdini, who served three and a half years in Illinois state prisons for selling marijuana, being Jewish on the yard was a matter of keeping his head down and doing his time quietly.

“Of course there were gangs, but I didn’t get involved,” he said. “I read books and hung out with the Jews.”

Ajdini, who came to the United States from Albania as a teenager and speaks seven languages, spent his time taking classes and preparing for his education at Northeastern University, where he currently studies.

But for inmates like Strauss, who served his time in more violent state systems with fewer Jews, quiet and insularity is not an option.

Gary Friedman, the director of Jewish Prisoner Services International, agreed. “Those who are the most out front about being Jewish get the least hassle,” he said. “We have inmates wearing yarmulkes and tzitzit in the most dangerous prisons in the country, and no one touches them.”

A Jewish inmate who seeks to pass as a non-Jew and is discovered raises the most red flags; the inmate remains different while smacking of dishonesty.

Building trust and being openly Jewish can go a long way, but it is no panacea. The struggle of prisoners to maintain respect among their fellow inmates is always ongoing, and Jews rarely have the numbers by themselves to ensure their safety. In a prison system where almost one in ten inmates is sexually assaulted and violence is rampant, not being backed by a large group of friends means exposure to real danger.

“[If] you have 1,200 inmates you’ll probably be lucky if five or six are Jewish,” said Carl ToerBijins, a former deputy warden in the Arizona Department of Corrections. “There’s strength in numbers. Being Jewish has no advantage.” According to Friedman, there are between 12,000 and 15,000 Jewish prisoners nationally, less than 1% of the total prison population.

Jewish prisoners learn to deal with this disparity strategically. Steven Strauss had a policy: if a member of a skinhead gang verbally attacked him for his Judaism, he would immediately challenge that member to a fight. By and large this prevented white supremacist groups from harassing him.

“If you have a beehive, you take the bees one at a time and the rest won’t want to take you,” he explained. “If he doesn’t come down to [fight], and [thereby] loses face, his group will get him.” Strauss’ readiness to fight dramatically raised the costs of anti-Semitism. Even for skinheads, saving face is more important than bigotry.

Perhaps the most noticeably different thing about Jewish prisoners is their access to kosher food, which is almost universally considered superior to regular prison fare. Kosher food sometimes contains meat and cheese (though not together), two items that cash-starved prisons often can’t afford for the rest of the population. But these benefits to keeping kosher come at a price; in prison, as on the street, there ain’t no such thing as a free lunch.

“You wouldn’t believe the politics around the kosher food on the yard,” said J.D. Rollins, a since-freed Muslim prisoner who befriended numerous Jews while behind bars in California. Inmates and staff both resented the special treatment they thought the diet represented. Kosher food would often be tampered with or stolen by inmates in the kitchens, both to punish those on the diet and to barter the valuable goods.

According to Friedman’s estimate, kosher food is so desirable that five-sixths of prisoners on the diet are non-Jews. They can do this by exploiting the vagueness of the law, which grants the right to a religious diet to those with a loosely-defined “sincerely held” religious belief. Though this leaves many chaplains fuming, some Jewish inmates take a more ironic view of the situation.

“You have skinheads and neo-Nazis running around on a kosher diet,” said Strauss. “I wore a yarmulke and said [to anti-Semites on the kosher diet],‘thank you for supporting the Jewish community, we appreciate the business.’”

There’s little irony in prison officials’ response to Jewish observance, however. In some states Jewish prisoners face as much or more anti-Semitism from staff as from fellow inmates. Former prisoners from Illinois said that their fellow inmates were usually not overtly bigoted. But the staff was a different story.

One former Illinois prisoner, who asked that his name not be used, said he was singled out by staff for being Jewish. While his fellow inmates could visit the Christian chaplain in the chapel, he could only see the rabbi in the visiting room, after being strip-searched.

Another ex-inmate from Illinois, who also wished to remain anonymous, was forbidden to wear a yarmulke except in his bunk, and waited two years to be allowed occasional access to phylacteries in the chaplain’s office.

Sometimes prison staff aren’t being malicious, but simply have a difficult time knowing what inmates are entitled to between Jews, Hebrew Israelites, Messianic Jews and a host of religious classes jostling for a niche.

“The policy itself is written so vaguely [that it] leave[s] discretion up to senior chaplains who often don’t know what people are entitled to,” said ToerBijns, the former deputy warden. This ignorance sometimes shows inmates the absurd side of correctional policy.

“They sent us a festival lunch on Yom Kippur,” said Joseph. “When you’re in prison, you don’t know why things happen.”

But not all staff decisions are so benign.

“Rural prisons have open anti-Semitism, even by staff,” said Rabbi Binyomin Scheiman, a Chabad rabbi who is the director of the Hinda Institute, an Illinois group that supports Jewish prisoners. “An employee I discovered was Jewish found [a copy of] Mein Kampf on his desk placed by other employees.”

Still, in Scheiman’s overall assessment he found this example an outlier. “By and large, [staff] are good… It’s not really dangerous for Jewish men in the state.”

Jewish women face different challenges in state prison, according to Rabbi Moshe Halfon, the Jewish chaplain at the California Institution for Women, a facility located in Chino, Calif. for inmates of all custody levels.

Female inmates live in a much less racially divided culture, according to Halfon and a former inmate of CIW. They are therefore able to ignore ethnic tensions to a much greater extent than male prisoners. But religion is still highly divisive.

“There were occasions when Christian volunteers said things that were misunderstood about who’s saved and who isn’t saved,” said Halfon. In that theologically hostile environment, Halfon tries to make Judaism vibrant and safe.

“There are quite a few evangelical churches [with a presence in the prison] which is why we’re so visible,” Halfon said. His work to make the Jewish chaplaincy well known has ranged from constructing a Sukkah and hosting 100-person Seders, to overseeing conversions and Bat Mitzvahs of inmates.

“Our Purim service rocks,” he added.

A former inmate at the prison, who wished to remain anonymous, echoed Halfon. “There was a Christian chaplain who, if you weren’t Christian, she didn’t want anything to do with you,” she said. “[The chaplain] would throw in Jesus when she shouldn’t have.” Facing pressure to convert is not a challenge unique to either gender, however.

“Even though they’re not allowed to proselytize they can’t help themselves,” said Friedman. “They’re fulfilling the great commission.” And it’s not just professionals: according to the study, over 70% of chaplains believe that inmates proselytize to each other.

To fight these racial and religious divides and the potentially dangerous mistrust they breed, many Jewish prisoners try to create an expansive community larger than one composed of the Jews who happen to be in their facility. When inmates can move past the initial differences inherent in diverse ethnicities and religions, trust can build and much of the anti-Semitism rampant in prison can be overcome through friendships.

“A Jew, a Muslim, a Christian and a pagan sat down to play dominoes,” said Joseph. “That’s not a joke.”