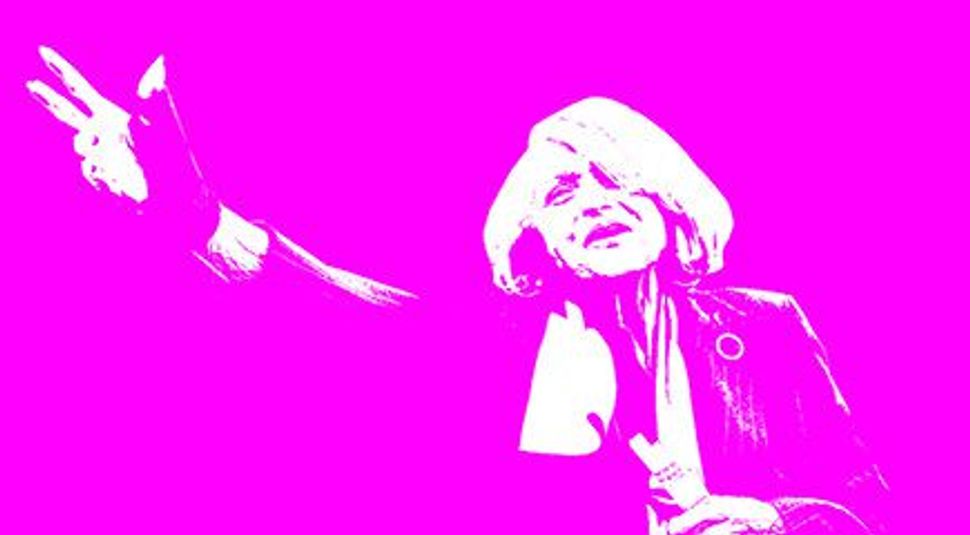 Who would have predicted that one of America’s most crucial battles for gay and lesbian rights would be won by an 84-year-old bottle blond Jew?

On June 26, Edith Windsor won her suit at the Supreme Court, a decision that struck down the federal Defense of Marriage Act.

Windsor, who lives in New York City’s Greenwich Village, married her longtime partner, Thea Spyer, in 2007 in Toronto. When Spyer died in 2009, she left her estate to Windsor. Because of DOMA, Windsor was prohibited from the benefit of a tax exemption for surviving spouses, and she was compelled to pay hundreds of thousands of dollars in tax on Spyer’s estate.

In 2010, with the help of her lawyer, Roberta Kaplan, also a Jewish lesbian, she filed suit to recoup her money.

According to Ariel Levy’s profile of Windsor in The New Yorker, Kaplan saw her client as the ideal plaintiff to defeat DOMA. A feminine octogenarian whose lifelong partner was deceased was unlikely to be painted as a political radical in the press. Windsor was the “perfect wife,” taking care of Spyer for decades after she was diagnosed with multiple sclerosis in 1977.

Windsor and Spyer’s relationship was much more than that of caretaker and patient. Over their four decades together, the two women traveled internationally — to Suriname, St. Thomas, Venice and elsewhere. Though Kaplan advised Windsor not to speak publicly about her sex life because of how it might affect the case, sex was an essential part of Windsor and Spyer’s romance, even after Spyer grew increasingly immobile because of her MS.

Spyer and Windsor were both Jewish, but they came from strikingly different backgrounds. Spyer, a psychologist, was born in Amsterdam. Her family made a fortune in the pickle business and escaped Holland before the Nazi invasion. Windsor, on the other hand, grew up in a family of modest means in Philadelphia. A graduate of Temple University, she married her brother’s best friend but divorced him less than a year after the wedding. (She kept his last name; her maiden name was Schlain.) At 23, Windsor moved to New York City to pursue a master’s degree in mathematics at New York University. She later became one of the first female senior systems programmers at IBM.

In 1967, two years before the Stonewall riots galvanized the gay rights movement, Spyer proposed to Windsor. So as not to arouse suspicion among Windsor’s co-workers, who didn’t know about her sexual orientation, Spyer giving her a round diamond pin instead of an engagement ring. Four decades later, the two finally wed.

As the case made its way to the Supreme Court, Windsor became a celebrity in the marriage equality movement. She served as the grand marshal of the New York City Gay Pride Parade just seven days after the ruling. Windsor was also a hero to many in the Jewish community: The Conservative movement’s Jewish Theological Seminary filed the first amicus brief in its history in favor of Windsor’s plea.

Kaplan told the Forward that Windsor shared many Jewish holidays with her family over the years that the pair worked on the case. She also spoke about Windsor at Congregation Beth Simchat Torah, Manhattan’s lesbian, gay, bisexual and transgender synagogue:

“I think the best way for me to sum up this historic Pride Shabbat in the year 5773 is with Edie’s own words on the steps of the Supreme Court when she was asked to explain why such dramatic change has taken place: ‘I think what happened is, at some point, somebody came out and said, “I’m gay.” And this gave other people the guts to do it.’” Her words echoed those of Rabbi Abraham Joshua Heschel when he wrote, “All it takes is one person… and another… and another… and another… to start a movement.”