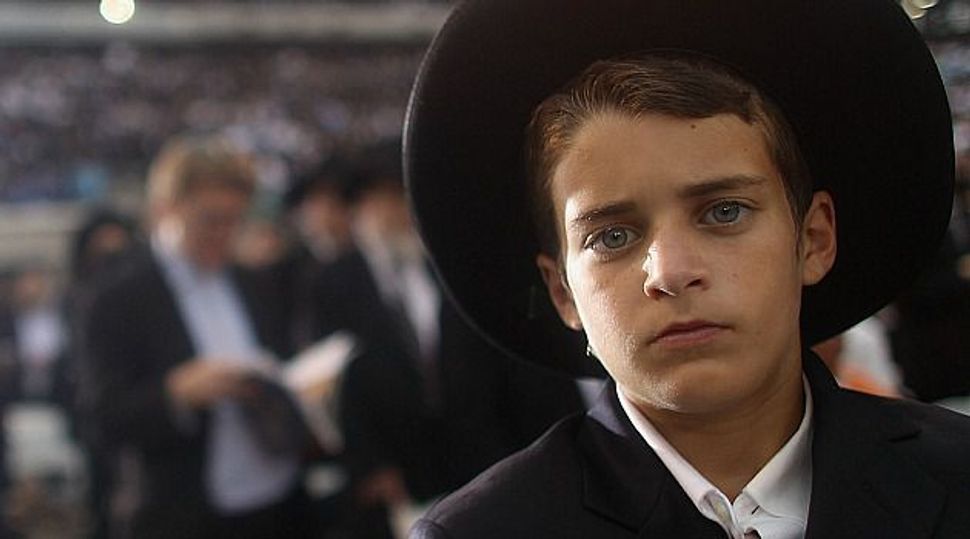 The Orthodox population is growing even faster than earlier reports from the Pew Research Center’s recent survey of American Jews suggested.

A new analysis of data from Pew finds that 27% of Jews younger than 18 live in Orthodox households. That’s a dramatic jump from Jews aged 18 to 29, only 11% of whom are Orthodox.

“Orthodox birthrates in just the last few years have been soaring,” said Jewish sociologist Steven M. Cohen, who requested the new data from Pew. “The sky is falling for the rest of the population.”

“There is a trend afoot, and in the next big population survey like this, we will see the beginning of a switch, whereby Orthodox Jews will eventually likely be the majority of American Jews,” said Sarah Bunin Benor, a professor of Jewish studies at the Hebrew Union College-Jewish Institute of Religion. She, like Cohen, was a member of the Pew study’s advisory committee.

The Pew report was based on interviews with 3,500 Jews across the United States. In its analysis of its research, Pew described a gradual decrease in Jewish identity among the non-Orthodox, and a gradual rise in the overall proportion of Jews who identify as Orthodox. The study reported that 10% of Jews were Orthodox, just 2% higher than a roughly approximate study 10 years ago.

The new numbers give those findings a different cast.

The nationwide findings are in line with a 2012 study by UJA-Federation of New York. The study reported that 60% of Jewish children in the New York City area live in Orthodox homes.

Much of the growth appears to have come from the ultra-Orthodox including the Hasidic sectors. Though Pew did not break out age data for that subgrouping, the survey found that of the 10% of Jews who identified as Orthodox, only 3% said they were Modern Orthodox.

The factors driving down the non-Orthodox population were explored thoroughly in early coverage of Pew and discussed widely in the Forward and elsewhere.

Less noticed were the exceptionally high birthrates reported by Orthodox Jews. Low levels of retention among older Jews who grew up Orthodox distracted from the birth rates and gave the impression that enough children were leaving Orthodoxy to keep the population relatively flat.

The new data challenges those assumptions.

High ultra-Orthodox birth rates are often visible in news media anecdotes For instance, when Israeli ultra-Orthodox rabbinical leader Yosef Sholom Elyashiv died in July 2012, he was said to have more than 1,000 living descendants.

Pew puts data to those anecdotes. The study’s numbers suggest that the Orthodox birthrate in the United States is far higher than that of most other religious groups. Pew found that Orthodox Jews averaged 4.1 children per adult, while America’s. general public averages 2.2 children. The Orthodox number is higher than the average for Protestants (2.2) and Catholics (2.4). Hispanic Catholics (3.1) come close, but still fall short.

These birth rates, which are helping to push the demographics toward an Orthodox majority, remain confounding to outsiders.

“Orthodox life is very, very different than a conventional lifestyle,” said Alexander Rapaport, 35, a father of seven. Rapaport lives in a Hasidic community in Brooklyn’s Boro Park and runs the soup kitchen network Masbia. He described a social structure designed to encourage and support large families — and that structure has apparently succeeded in more than doubling its share of the Jewish population in less than two decades.

Rapaport’s wife had the couple’s first child when Rapaport was 21. Their total of seven (so far) is about average for their community. Their latest, a 3-month-old, wears baby clothes passed down from a cousin born a year earlier.

“My wife didn’t buy any new stuff for my daughter,” Rapaport said. “My sister gave her all her stuff that she had for her daughter.”

Food, Rapaport said, is also inexpensive. “Most people in New York think of food, they think of eating out,” Rapaport said. In his community, it’s “chulent and gefilte fish eaten at home.”

In Rockland County, N.Y., the Hasidic village of New Square receives Section 8 housing subsidies at a higher rate than anywhere else in the region. In New Jersey, schools in the Orthodox city of Lakewood get more federally backed E-Rate telecom subsidies than schools in any other municipality. Half of the people living in the ultra-Orthodox Hasidic village of Kiryas Joel, in Orange County, N.Y., are on food stamps; a third are on Medicaid.

Some of that government aid goes to cutting school prices. For secular parents, the price of private school can often be a factor in family planning. Religious school tuition could make having large numbers of children unfeasible, but ultra-Orthodox schools are inexpensive. Hasidic men contacted by the Forward reported that Hasidic families pay between $200 and $400 per month year-round for school and summer camp.

Catholic elementary schools in Brooklyn cost $3,500 for the school year. Tuition to the Abraham Joshua Heschel School in Manhattan begins at $34,000.

Large families, however, don’t only create burdens on the parents. Older children are often tasked with raising their younger siblings. The result, according to Lani Santo, executive director of Footsteps, which helps people leaving Orthodoxy, is that a disproportionate number of their members are the eldest in their families.

A survey of 70 Footsteps members found that 30% were the oldest of their siblings. T

“The oldest children are burdened with a lot of the responsibility of taking care of younger children, and that could lead to resentment,” Santo said.

That could be a factor in the Orthodox dropout rates, which remain substantial. According to Pew, among Jews aged 18–29 who grew up Orthodox, 17% say they are no longer Orthodox.

In a political atmosphere leaning toward austerity, it’s feasible that cuts to welfare-type programs could affect ultra-Orthodox Jews’ ability to maintain their large families. But William Daroff, senior vice president for public policy and director of the Washington office of the Jewish Federations of North America, said he doesn’t believe that cuts would affect Orthodox family size.

“My sense is that the Orthodox birth rate is more about Halacha than it is about governmental subsidy,” Daroff said.