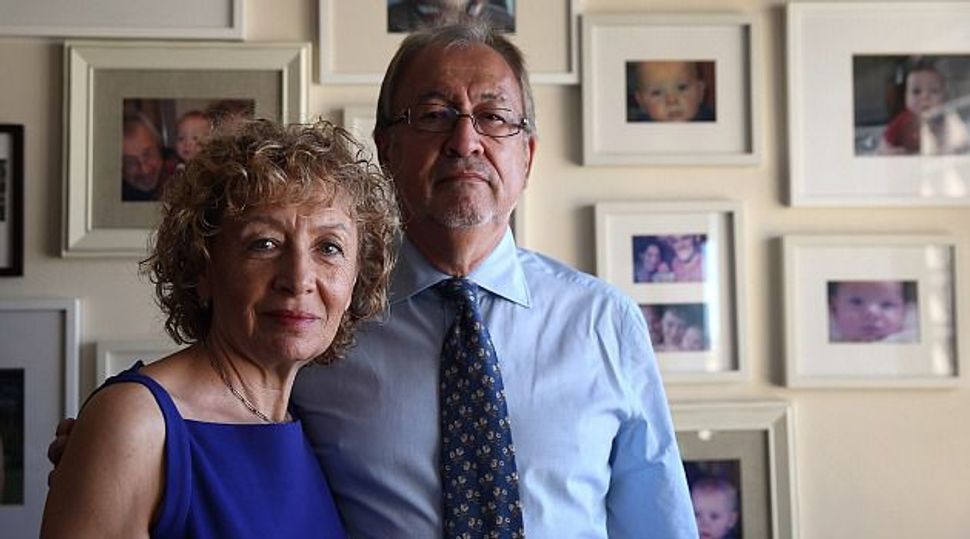 Link to Past: Holocaust survivors Kenneth and Ida Dancyger, both 68, pose in front of photos of their grandchildren. Even as the number of survivors dwindle, the cost of caring for those that remain will soar. Image by getty images

The number of living Holocaust survivors will shrink rapidly over the next 13 years, but the costs of caring for the remaining survivors will rise, according to a new report by Selfhelp Community Services.

Selfhelp, a social service provider for seniors, estimates that 65,000 survivors currently live in the New York metropolitan area. By the year 2025, only 23,000 will remain.

But those numbers can be misleading. Selfhelp expects the cost of supporting its survivor clients will increase more than 20% by 2025, from $9.9 million to $12.6 million per year.

“Even though the overall number will decline, there will be more need for care,” said Elihu Kover, who directs Selfhelp’s programs for survivors.

Selfhelp cared for 5,300 survivors last year, and would like to serve a similar number through 2025. New clients seek them out regularly, with 700 added last year. “They’re even coming in at 95 – they walk in the door and say, ‘I never needed you before now,’” Kover said.

Selfhelp expects a rise in the cost of caring for these clients, thanks in part to their increasing frailty. Survivors’ health often begins a noticeable decline after age 75. By the year 2020, every survivor will be 75 years or older, even those born in the final months of World War II. A correspondingly high percentage will require costly medical care.

Survivors also face more severe medical problems than the general population. The physical horrors of the Holocaust, including assault, starvation, and exposure to inclement weather, continue to take a toll on survivors’ health as they enter old age. Entering a hospital or a nursing home, however, can be emotionally traumatic.

“[T]he structure and regimentation of institutional care can re-awaken overpowering fears related to the trauma they experienced during the Holocaust,” the report said.

Selfhelp tries to ensure that survivors receive care in their own homes. Thanks to negotiations by the Conference on Jewish Material Claims against Germany, the German government has agreed to significant funding increases for survivor homecare. The amount of subsidized homecare provided by Selfhelp has more than quadrupled in the last eight years, and Kover expects further growth. “The need will continue to increase as survivors age and need more care,” he said.

The final generation of survivors is especially ill equipped to meet the financial costs of aging. A UJA-Federation of New York report cited by Selfhelp found that the youngest survivors are largely from the former Soviet Union, or two-thirds of survivors below age 75. Soviet survivors are more than four times as likely to live in poverty as other survivors, as they often do not qualify for social security. As these impoverished survivors enter their final years, Selfhelp expects they will need more financial assistance than their predecessors. Last year, Selfhelp distributed over $1 million is emergency aid.

But one of Selfhelp’s most important programs is quite inexpensive. Monthly “coffeehouse” events allow survivors to mingle and connect with each other.

“I enjoy them very much because I get together with my friends, and the lunch and entertainment is always very nice,” said 91-year old survivor Hannah Deutch, who escaped Germany on the Kindertransport and remembers Kristallnacht “like it was yesterday.”

Seventy-five years later, Deutch uses a Selfhelp social worker to apply for benefits from Germany and is a regular attendee at Selfhelp’s Queens events. Every Passover, she attends a seder run by Kover with other Queens survivors.