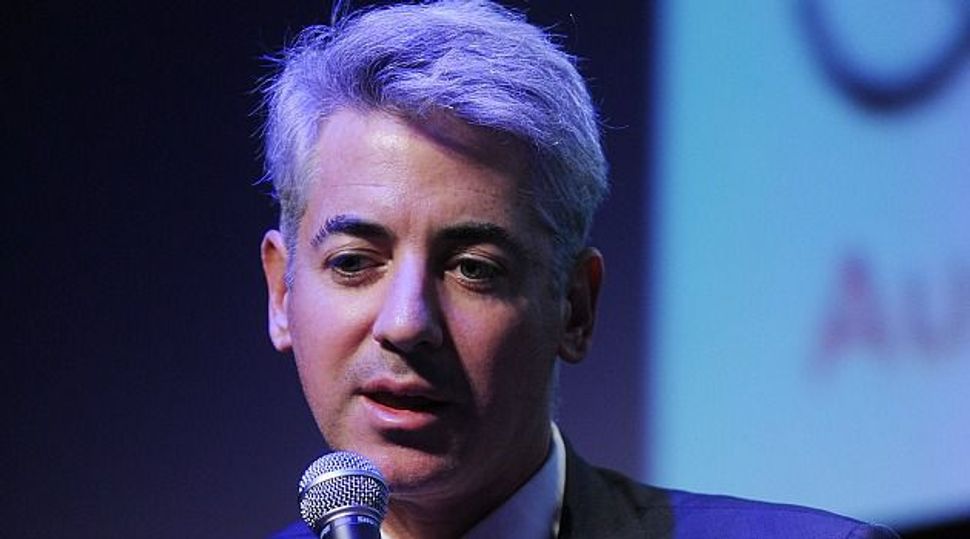 It’s a financial dogfight for the ages. When billionaire investor and CEO of Pershing Square Capital hedge fund William Ackman short-sold $1 billion in stock of Herbalife, the Los Angeles-based nutrition company, he drew the ire not just of the company, but of other fellow hedge funders who saw Ackman as taking his legendary arrogance too far.

In a speech at the Oxford University Saïd Business School at the end of October, Ackman said the company was nothing more than a Ponzi schemeand that his target share price for Herbalife stock was $0. He predicted the business would collapse “within 12 months,” Business Insider reported.

Herbalife’s CEO Michael Johnson has taken particular issue with these claims, calling it a “bogus accusation” while accusing Ackman of manipulating the market, Bloomberg Businessweek reported. Ackman has made himself a string of enemies, including Dan Loeb, the founder of Third Point LLC Hedge Fund, who has subsequently bought a large position in Herbalife, betting on its long term viability.

Despite their current animosity, Ackman and Loeb used to be friendly not least because of their shared Jewish values. For one thing, both Ackman and Loeb married the proverbial Nice Jewish Girl — Ackman married Karen Herskowitz in New York, and Loeb was married to Margaret Munzer by Rabbi Hershy Blumstein in East Hampton. Both too are engaged in philanthropic and political activities, often with a Jewish bent.

A representative for Loeb told the Forward that Ackman and Loeb are still friendly.

“Dan last week at a Dealbook conference said many nice things about Mr. Ackman,” the rep said in an email. “There is no feud between Dan and Bill.”

Ackman is from an affluent Jewish family from Chappaqua, N.Y., and told the Hillel Renaissance Award dinner in 2011 that he found Harvard, his alma mater, to be “a very WASPy place.” He said that he regularly ate meals at Harvard Hillel and joked that he even joined crew in order to meet other Jews. In February 2011, Ackman was listed as one of the top 50 most charitable Americans for 2010, JTA reported. In total, he and his wife gave away $59.3 million in 2010, part of which was a pledge of $25 million for Newark, New Jersey school system which Ackman made following Mark Zuckerberg’s pledge of $100 million. The same year The Jerusalem Post called him “one of Wall Street’s most significant players.”

Also in 2010, Ackman gave $6.75 million toward paying down the $30 million debt of the Center for Jewish History in New York, on whose board he serves. The Ackman family said they support the Center because, “We want our children to know, not only their living relatives, but those representing past generations, for a greater connection to their family and ancestral origin and heritage.” Ackman also contributes to the Innocence Project, a non-profit started by former O.J. Simpson defense lawyers Barry Scheck and Peter Neufeld, which works to free the wrongly convicted, Jewish Philanthropy reported.

In 2012, Ackman joined Bill Gates and Warren Buffett in “The Giving Pledge,” an initiative in which millionaires and billionaires pledge to give away to majority of their wealth to charity.

Loeb is a West Coast Jew who grew up in Santa Monica with “a soft spot for the Caribbean,” as he told the Jewish Enrichment Center in a 2009 talk. In that same talk, Loeb told the assembled audience of young Jews, new to the investment world, that investors also need to be “a little bit of a philosopher,” and citing his ancestors’ Holocaust stories, how one’s life experience needs to shape one’s business practices. “I think the fact that you’re interested in Judaism, in the Jewish community, and in Jewish philosophy,…[these] will help you in your journey, in life and in investing,” Loeb said.

According to New York Magazine, Loeb meets regularly with his rabbi. “Money isn’t everything,” Loeb told the reporter at the time. In fact, in 2009, when the Harlem Children Zone lost its funding when Lehman Brothers collapsed, Loeb decided to hold his hedge fund holiday party at the Harlem Children’s Zone to help bolster their ailing finances. “Community is important,” Loeb said about that decision. When New York State legalized same-sex marriage in 2011, Loeb was listed as one of the most prominent Jewish philanthropists who gave to marriage equality causes.

Whether Loeb and Ackman were ever actually friends, they were certainly once friendly. An extensive Vanity Fair profile of the two men from April 2013 details a bike trip, now passed into Wall Street lore, that Loeb, Ackman and a few other hedge fund friends took out on Long Island. Ackman, in his over-zealous style, simply took off on his bike with no warm-up and no real experience in long-distance riding. At first he was ahead of the pack, but soon fell behind faltering and in pain.

The origin of the current bet over Herbalife between Ackman and Loeb, detailed in Vanity Fair, stems from a May 2012 conference call on Herbalife’s quarterly earnings. Prior to this, Ackman and hedge fund manager David Einhorn, another former friend of Ackman, had been researching Herbalife’s company structure and earnings, and based on the recommendation of a third party financial research group — the Indago Group, nicknamed the Indago Girls — had begun to suspect that it was nothing more than a pyramid scheme.

According to Vanity Fair, during the earnings conference call, Einhorn began asking tough questions about whether Herbalife’s on-the-ground sales people — similar to the Mary Kay Cosmetics girls — were the bigger purchasers of Herbalife products, or whether the company’s profit was coming from actual costumers. Des Walsh, Herbalife’s president, was unable to directly answer the question, and by the end of the conference call Herbalife’s stock had dropped from $70 per share to $56 per share.

As the stock fell Ackman leapt at the opportunity — though it may already have been too late — and started shorting millions of shares of Herbalife stock; he now owns more than 20 million shares, which amounts to more than 20% of the stock.

His attack culminated in a three-and-a-half-hour, 330-slide presentation in December 2012 at the annual Ira Sohn Investment Conference in front of 500 people with another 1,300 watching online, detailing why he thought Herbalife was a fraud. Ackman then pledge to donate all proceeds made from his short to charity.

Since then, the Ackman-Loeb battle has divided Wall street itself, with old Wall street wolves like Carl Icahn, another big-time Jewish investor, and Loeb taking up the long position opposite Ackman’s short — a sort of “screw you” in the face of what they perceive to be Ackman’s incredible chutzpah. Icahn and Loeb make up the majority of the long position against Ackman, and have been vocal about their desire to take Ackman down.

“I’ve really sort of had it with this guy Ackman,” Icahn told CNBC in January 2013, calling in while Ackman was a guest on the show. “He’s like the crybaby in the schoolyard. I went to a tough school in Queens, and they used to beat up the little Jewish boys. He was like one of these little Jewish boys, crying that the world was taking advantage of him.”

Ackman and Icahn already had a grudge over 2003 investment deal that went bad. Nowadays, Loeb and Ackman also “dislike each other profoundly,” a source told Vanity Fair. Part of this stems from their contrary positions over Herbalife stock, and part of it from a $200 million investment that Loeb’s Third Point LLC hedge fund made with Ackman’s Pershing Square Capital. Ackman had just made hundreds of millions in a long position on McDonald’s, but the investment into which he bought lost Loeb $175 million of his original $200 million. To this day, Ackman has been apologetic for that loss, and Loeb insists their current battle over Herbalife is not personal.

However, Loeb has been vicious toward Ackman. In July, Loeb edited his profile on Bloomberg Terminal to include a message that read, “New HLF [Herbalife] product: The Herbalife Enema, administered by Uncle Carl” in reference to Icahn’s assertion that Ackman will be the victim of “the mother of all squeezes,” Business Insider reported.

It’s estimated at this point that Ackman has lost millions on his position, but he remains steadfast in his conviction that he is in the right, something he has a reputation for doing. Meanwhile, since last December when the share price reached $26.06, stock of Herbalife (NYSE:HLF), has stayed on a fairly consistent upward trend. The bet is still on.