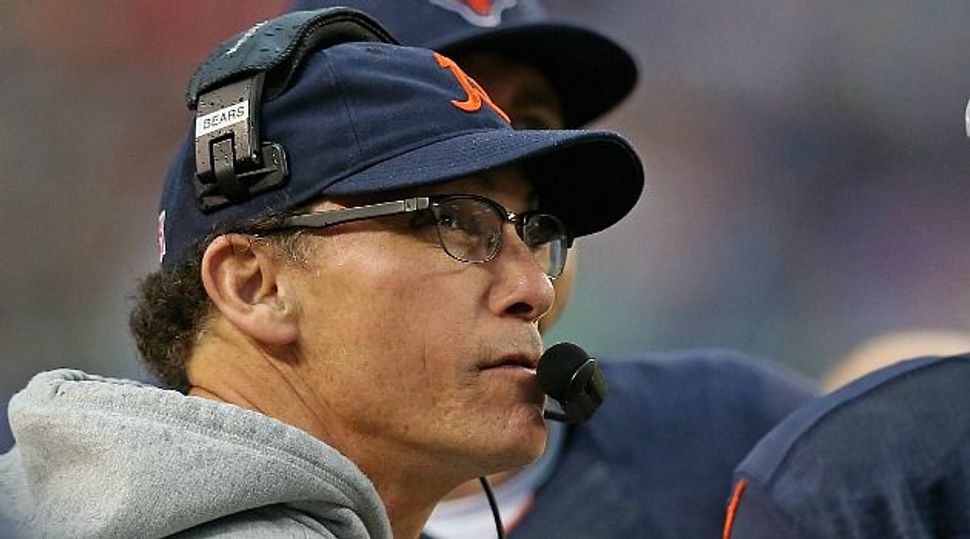 Bear Man: Marc Trestman is the only Jewish head coach in the National Football League. But don?t call him a trailblazer. Image by getty images

Midway through the National Football League season, the Chicago Bears are battling for top spot a wild NFC North division. After a disappointing 2012-213 season they are poised to make a playoff appearance. Leading them on the field every Sunday is their head coach Marc Trestman, who also happens to be Jewish.

Trestman is the first Jewish coach in the NFL since legendary Bills Coach Marv Levy. Trestman arrived in Chciago earlier this summer after leading the Montreal Alouettes to success in the Canadian Football League.

During his career, Trestman has won an NCAA championship, Canada’s Grey Cup and is now aiming to bring the Bears an NFL championship. The Bears lost won a Super Bowl in 1985 under legendary coach Mike Ditka.

The Forward’s Raphael Gellar spoke to Trestman about why he gave up law for coaching, his goals for the Chicago Bears and why he doesn’t think it’s important that he’s the only Jewish coach in the NFL.

Raphael Gellar: You obtained your law degree in 1980, why did you immediately become a coach instead of being a lawyer?

In 2010, you released your book, Perseverance: Life Lessons on Leadership and Teamwork. Why did you decide to write a book?

I wrote the book when I was out of football in 2006. It really started by just writing a book, but I decided to do some leadership speaking as well. I also wanted to do a personal review on my life and bring some clarity to it. I had worked so hard to become a head coach in the NFL and I got really close but not there. I thought the best thing to do was look back. People say to know where you’re going you have to look back and see where you came from. The book allowed me to do that. I wrote the book for leadership speaking, to find out a little bit more about myself and I wanted to do it for my daughters as well to let them know what their dad was about.

What do you believe your responsibilities are to your players as the head coach of the Chicago Bears?

Wherever I go my focus is always the same: to serve the players and create an environment where they can learn the game. My role here is to teach leadership. I also need to teach guys to be better fathers, husbands, teammates and how to lead. I try to do that with my words and by example. Most importantly, I just try to do this by creating the right environment for our players.

What is your relationship with star quarterback Jay Cutler?

It has been exceptional from the first day. Jay is very, very knowledgeable in football and in a lot of different ways. He is a well-grounded guy and very passionate about the game and has worked very hard. It is really disappointing that he has gotten hurt this year because he has put so much time and energy into this season.

Is it important to you that you are the only Jewish coach in the NFL?

With all due respect I really don’t. The game draws people from everywhere. We have young men working in this building from all different religions, backgrounds and all different ways of life. People come together in this game to be part of something bigger than themselves, part of one community that I believe goes beyond all that. I have never looked as myself in that individuals light as being “one of only” I find it very hard to think in those terms.