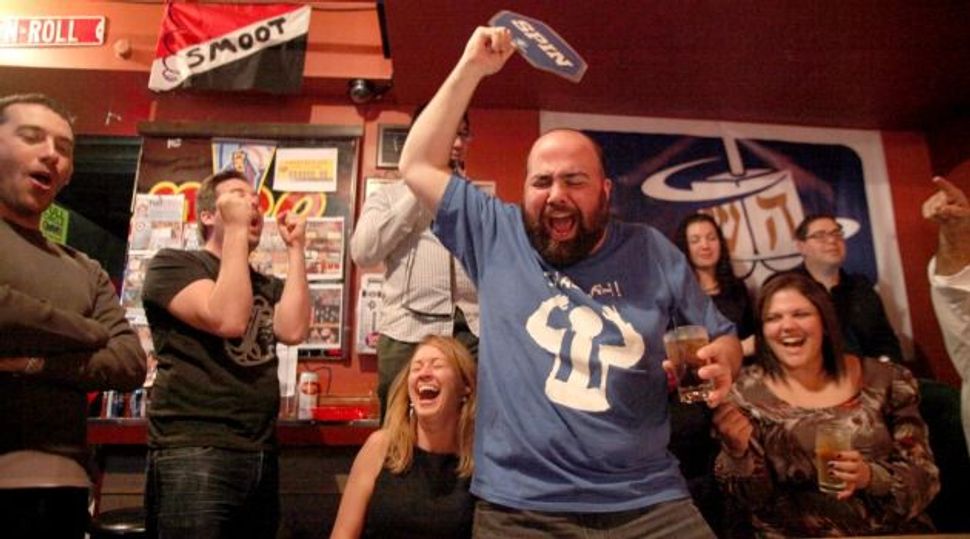 The crowd leaned in closer toward the game table as the competitors nervously practiced spinning techniques before the final round of the first Major League Dreidel tournament of the 2013 season. But something wasn’t quite right.

“I know exactly what this needs,” said Eric Pavony, 34, founder and self-styled “knishioner“ of Major League Dreidel, before heading to the front of Full Circle Bar, in the Williamsburg section of Brooklyn, on Monday, November 25.

By the time the first of its metallic chords came crashing down, it was clear that Pavony’s decision to cue up a heavy-metal cover of “Hanukkah, Oh Hanukkah” was the right one. The mood was set, and it was finally time for the competition to begin.

“Most people, when they kind of grow out of being a kid, they put the dreidel in their rearview mirror and never look back,” Pavony said. Enter Major League Dreidel, the competitive spinning competition that he created in 2007.

“Here they are, coming out to a bar in Williamsburg, Brooklyn; they have a beer in one hand and a dreidel in the other, and they’re staring down their competitor across the Target Tops table, and it’s on.

This year’s 16-team tournament, dubbed “Thanks-spinning,” involved a complicated game called Target Tops, a mash-up between cornhole, shuffleboard and, of course, dreidel. The game board is segmented into zones that are each given a dreidel letter indicating a gradually higher point value and culminating in a recessed cup at the end of the table in an area marked with a gimmel. A dreidel that stops spinning on the same letter of the zone it lands in earns twice the number of points. The Holy Grail is a move that Pavony dubbed “the spinny-dip”— a dreidel spin that dances around the gimmel cup at the end of the table before falling in for the highest spin score possible.

The complicated table, crafted with Major League Dreidel insignia and graphics, is a collaboration between Pavony and John Fisk, a designer who met Pavony in the bar Skee Ball league (called Brewskee Ball) that Pavony founded at Full Circle several years before beginning the dreidel competition.

But the complex game has simple origins. Pavony’s dreidel obsession began one Hanukkah at his parents’ house, where Pavony sat staring at the ornamental dreidels lining the dining room table after having enjoyed one of his mother’s “epic Hanukah parties.”

“We had a lot of latkes, we had a lot of vodkas. She throws a latke-vodka party,” Pavony clarified, “but nobody was spinning them!”

So he challenged his family to see who could spin the traditional top the longest, and he quickly realized that the exercise isn’t just dumb luck; several showed an innate talent.

That “something” has grown tremendously over the past couple of years. In addition to the Target Tops table, he conceived of and co-produced (with Fisk) a miniature wooden Jewish star-shaped dreidel stadium he dubbed the “Spinagogue.” He later sold it at Bed Bath & Beyond, Urban Outfitters and other retailers.

This year’s Thanksgiving-Hanukkah fusion made for a more intimate event at Full Circle (which he co-owns), since many Major League Dreidel fans had headed out of town for the holidays. But Pavony said that he can easily pack the bar; past tournaments have drawn hundreds of players and onlookers. This year, Major League Dreidel is holding a tournament Denver.

“Major League Dreidel has opened up Hanukkah and, I would say, Judaism to some degree, to people that would otherwise know nothing about it,” Pavony said. “They’re coming with their Jewish friends, and they fall in love with spinning this little top.”

It’s also possible they’re falling for the pervasive humor at the event. Pavony rattled off a list of his favorite pun-tastic team names: “The Spincredible Hulk,” “Jimmy Gimmel,” “Ooh La Latke,” and “Gelty as Charged.” A timely addition to this year’s lineup? A half-Jewish, half-gentile duo dubbed “Goyim of Thrones.”

The favorite team going into the final round, competing nearly two hours after the tournament began, comprised Aviva Grinnell, a 28-year-old resident of Brooklyn’s Park Slope, and Eric Pavony’s father, Howard Pavony — better known as, respectively, “Aviva Las Vegas” and “Virtual Dreidel.” The team was a runner-up last year, and Howard Pavony won a 2008 showdown with a spin-time of 15.4 seconds.

By this round, one spectator had established himself as a dreidel expert, leaning over the edge of the table, brow furrowed, and holding a “Spin/No Spin” sign that he used to indicate whether the move in question was a fair spin or a clunky, out-of-bounds toss. Pete Marinucci, a former Major League Dreidel judge, was still looked to for his unofficial comment on the referee’s ruling.

“I’m actually not Jewish,” Marinucci, 33, said later. He’s a Williamsburg local who became friends with Pavony through his Brewskee-Ball league. Marinucci said he loves the inclusiveness of the event, both culturally and competitively, and wishes he were Jewish “so I could have my turkey stuffed with latkes, and stuff like that” on this year of odd holiday timing.

The final showdown at hand had him rapt, scrutinizing every wobbly spin. The score was tight, and the last spin came down to Aviva Las Vegas and Virtual Dreidel’s opponents, who very nearly scored a walk-off spinny-dip. With the help of Marinucci’s sign, though, it was correctly ruled a “No Spin.” The crowd erupted in surprise, screaming as camera flashes added a strobe light to the victory dance party. Last year’s runners-up were going home with the gelt.

The competitors high-fived and hugged one another after a match hard fought. Pavony awarded Grinnell and his own father with the spoils of success: a Major League Dreidel T-shirt and a Spinagogue of their own. It’s Grinnell’s fourth year playing, a repeat appearance with Virtual Dreidel, and a satisfying victory after last year’s near-miss.

“There’s an amazing community here,” Grinnell said. “The first time I ever walked into this bar was four years ago, for this competition — and I’ve never stopped coming back.”

Jared T. Miller is a freelance journalist based in New York. He has written for Time, the New York Daily News and GlobalPost, among other publications.