Ron Perelman Is a Mix of Tabloid Headlines and Chabad Charity 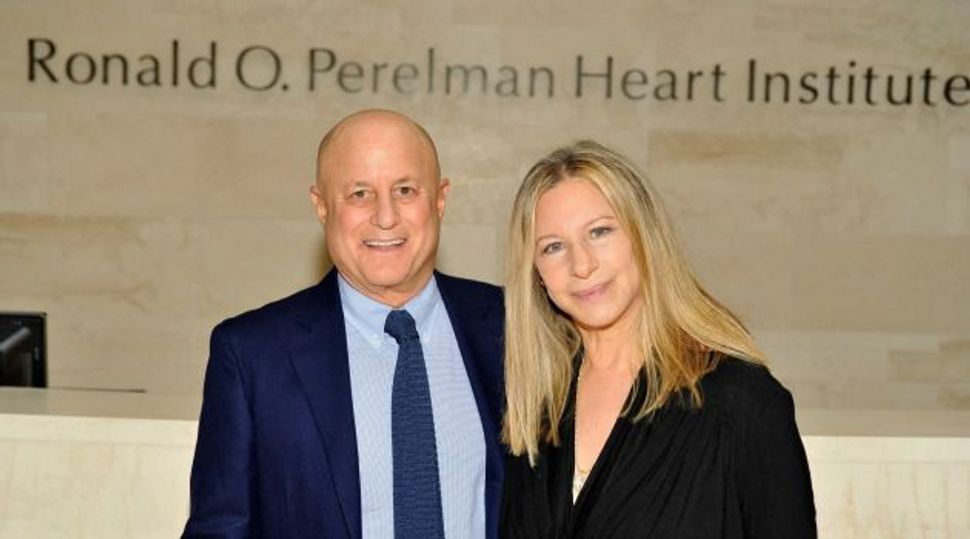 Celebrity and Charity: Ronald Perelman is as famous for tabloid headlines as he is for his charitable contributions. Here, he and Barbra Streisand visit the Ronald O. Perelman Heart Institute at New York Presbyterian Hospital. Image by Getty Images

Ronald Perelman is in the news, and once again it is for his family’s trademark feuds, fueled by millions, many millions, of dollars.

In the latest round, now on display at a New Jersey court, Perelman’s daughter is suing her uncle over her grandfather’s inheritance for more than $600 million. In the past decades, there have been similarly expensive lawsuits with ex-wives and even between Perelman and his brother.

But in the Jewish community, especially in the Philadelphia area, the Perelman family is known more for philanthropy than for scandals. While some may associate the name with raunchy tabloid headlines, others see it on plaques marking the family’s donations on the walls of hospital wings, school buildings and synagogues.

The Perelmans’ contributions to the Jewish community are undergoing a generational shift. While Raymond Perelman, the family patriarch, made his mark on Conservative Judaism by funding day schools and synagogues, his son Ronald Perelman’s personal draw to Orthodox life is translated into more attention being given to Chabad, and more donations going to Chabad-related causes. In Orthodox circles, Ronald Perelman is known for his strict observance, keeping kosher wherever he travels and flying rabbinical students across the globe to make a minyan for Sabbath prayers.

“I believe that God plays this enormous role in my life, and I believe that it’s my obligation to give back and to follow the rules that were set,” Ronald Perelman said in a 2011 interview.

The Perelman prominence in the Jewish community began with Raymond Perelman, 96, a successful businessman who moved to the Philadelphia suburb of Elkins Park after marrying Ruth Caplan (who died in 2011 at the age of 90). The couple’s two sons, Ronald and Jeffrey, followed in their father’s footsteps in the business world, although it was clear from the start that Ronald, who is now 70, was the one who shared his father’s passion for high-stakes acquisitions and trades. Ronald Perelman’s net worth is currently estimated by Forbes magazine at $14 billion, making him the 27th richest American. He is the chairman of the cosmetics giant Revlon and is involved in numerous other investment areas.

Perelman’s personal life has drawn just as much attention as his business success. A serial monogamist, he has been married five times and has eight children. His divorce cases ended with hefty settlements and extensive tabloid coverage.

Perelman met his first wife, Faith Golding on a cruise to Israel when he was 21. They were married for 19 years and had four children together. His second wife, Claudia Cohen, a former New York Post gossip columnist, was also born into wealth. Her father, Robert Cohen, owned the Hudson News airport retail network.

It is this branch of the Perelman family that is currently onstage. Or rather, in court. Samantha Perelman, 23, Perelman’s daughter with Cohen — who died in 2007 — is suing her uncle James Cohen over the Hudson News inheritance. She is claiming that he used “undue influence” to persuade his father, Robert Cohen, who was ill at the time, to cut her mother from most of his estate.

The lawsuit reflects the noxious relationship that Ronald Perelman has had with his former brother-in-law, and Perelman’s belief that Robert Cohen was not fit to make decisions about his estate because of his medical condition. Perelman was once even banned from visiting the Cohen residence after being accused of attending a bar mitzvah celebration uninvited in order to spy on Cohen to look into his health. The trial going on at the New Jersey Superior Court, in Hackensack, is as ugly as could be expected. In the latest developments, lawyers for Samantha Perelman presented a video of her late grandfather unable to speak clearly or to read a document presented to him — further proof, they claim, that he was not fit at the time the decision was made to bequeath most of his estate to his son rather than to his late daughter.

For Ronald Perelman, who is picking up the legal bills for his daughter’s lawsuit, this is one of many legal encounters with family members. Beyond his ex-wives and former brother-in-law, Perelman also was a party to the family’s toughest feud, when his brother Jeffrey argued that their father unfairly gave Ronald a greater share of the family business. The claims and counterclaims reached the U.S. Court of Appeals, but eventually all of them were dismissed.

Ronald Perelman’s third wife, Patricia Duff, converted to Judaism before the marriage, and the extent of her adherence to Jewish laws became a court issue in the couple’s custody case, when Perelman’s attorneys claimed Duff took their daughter to an Easter egg hunt during Passover. In 2000, Perelman married the Jewish actress Ellen Barkin. The marriage lasted six years and made the couple frequent guests in the Hollywood gossip columns. In 2010 he married his current wife, Anna Chapman, who also converted to Judaism.

But while at home and in the boardrooms, the Perelmans have earned a take-no-prisoner reputation, the family members have also made a name for themselves as leading philanthropists. In 2011, Raymond and Ruth Perelman donated $225 million to the University of Pennsylvania School of Medicine, which they had supported generously in the past. They were also major funders of Philadelphia’s National Museum of American Jewish History ($1.3 million); the Jewish Federation of Greater Philadelphia; American Friends of the Israel Museum, and Perelman Jewish Day School in Wynnewood, Pa. In 1999, Raymond Perelman famously took back his pledge to donate $2 million to the Akiba Hebrew Academy, in Merion Station, Pa., because the school refused to rename it after him.

Ronald Perelman’s philanthropic activity has included large donations to medical research institutions and to art museums, and while still giving significant amounts to the University of Pennsylvania, he now directs much of his philanthropy at causes in and around New York, where he resides. In 2006 he gave a $4.7 million gift to Princeton University to establish its Jewish studies institute.

While his father’s donations to the Jewish community focused on education in line with the principles of Conservative Judaism, Ronald Perelman’s philanthropic giving to religious institutions reflects the shift he has made to becoming Orthodox from growing up Conservative and attending a Reconstructionist synagogue.

A rare father-and-son interview that Raymond and Ronald Perelman gave Forbes in 2011 provides a glimpse into the son’s world of Jewish beliefs.

“Why are you so religious?” Raymond Perelman asked his son in the interview, adding: “I mean, here’s a guy who’s got so much money he can’t spend it, why is he religious? He has these Orthodox kids he brings from all over the world when he wants a minyan on Saturday, he flies them in.”

His path to Orthodoxy began with a meeting almost five decades ago in Philadelphia with Rabbi Abraham Shemtov, who was close to the late Lubavitcher rebbe and now chairs the executive committee of Agudas Chassidei Chabad, the umbrella organization of the international Chabad-Lubavitch movement. Perelman quickly embraced an observant lifestyle. He does not work or answer the phone on the Sabbath, and, according to friends, studies Torah every day. He prays at his own synagogue, built next to his Manhattan home on 63rd Street, and has an aide make sure that a needed minyan of 10 Jewish men is available for prayer each weekend.

“Rabbinical students in [Brooklyn’s] Crown Heights will get a call asking, ‘Do you want to do Shabbat with Ron Perelman?’ and they’re always happy to come,” a Chabad activist said. These invitations can take young students to join Perelman in prayer in the Hamptons on Long Island, in Miami or on his travels around the globe.

The businessman has shown his gratitude to Chabad by becoming one of the movement’s main benefactors. Officials in Chabad would not put a dollar sum on his contributions, but they noted he was among the top givers. When the rebbe’s wife, Chaya Mushka Schneerson, died in 1988, Shemtov followed the widowed rabbi’s wish to commemorate his wife by investing in Jewish women’s education. He turned to Perelman to fund the building of Beth Rivka girls school, in Brooklyn. When the rebbe saw the work being done on the site, he made a $470 donation, symbolizing the numeric value of the letters of his late wife’s Hebrew name. Perelman responded immediately with an extra $470,000.

“He is philanthropically an enabler,” said Shemtov’s son, Rabbi Levi Shemtov, director of American Friends of Lubavitch, in Washington. “He doesn’t like to give instead of others, but he is always there to help when others do their share and there is still a need, especially if he can help bring something important to fruition or over the finish line.”

Several years ago, Perelman gave a seven-figure gift to support new Chabad emissaries around the world, after learning that posts were vacant due to lack of funding. He met with the emissaries before they departed, and gave each one a mezuza to place on the new Chabad house they will open.

A Jewish organizational official who had pitched the Perelmans for support spoke about the deep commitment he felt among members of both generations to the Jewish community. Still, the official noted, “these are number people” who demanded to know exactly what their donations will be used for and to make sure they go to the right cause.

The Perelmans’ latest legal battles are unlikely to affect the family’s role in supporting Jewish causes. Ronald Perelman’s wealth has been stable, and high-profile family disputes have never yet affected his business or his philanthropic involvement. And his father also shows no signs of slowing down, expressing recently his interest in purchasing The Philadelphia Inquirer. According to his son, Raymond Perelman “works every day and still has his eye on pretty girls.”

Ron Perelman Is a Mix of Tabloid Headlines and Chabad Charity