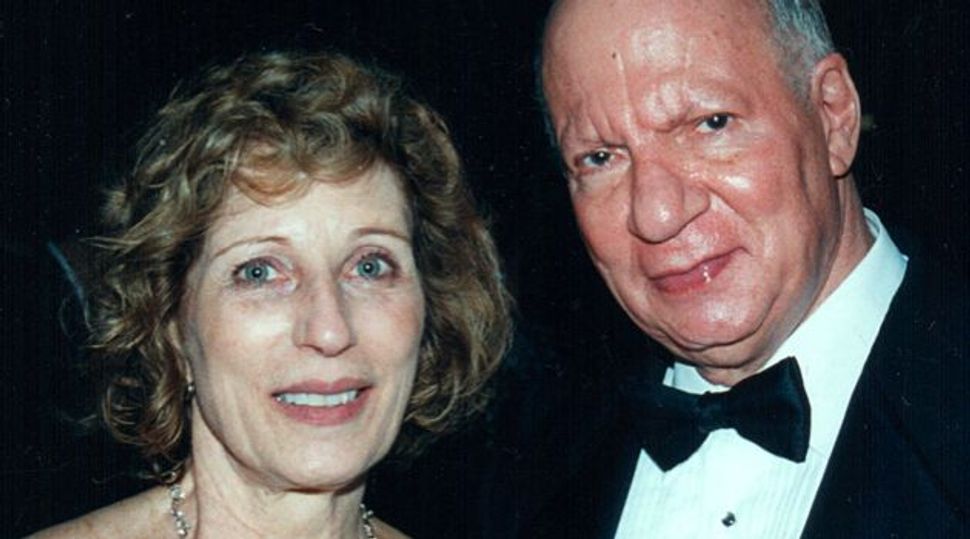 Siblings: The author and her brother, Jack, in 2003. Image by Courtesy of the Author

‘There are no online reviews for hospices,” I said to my 79-year-old brother shortly after he announced he was stopping dialysis. His decision meant this was the first day of the rest of his life, yet we both laughed. Jack had been admitted to the hospital with pneumonia, complicated by serious heart and kidney problems. Lying in bed for several months, he counted my visits — and the raising and lowering of the head of his bed — as the highlights of each day. In his condition, I would have made the same choice.

Though we came from the same gene pool, the distribution of genes created two very different people, not designed to be friends. Jack was proper; I am bold. He was restrained and cautious; I’m impulsive and unguarded. He kept to himself; I have many friends. He was perceived as refined and tasteful; nobody would define me as either. We’re both New Yorkers, but my brother was an Upper East Sider with a large tie collection; I live in the West Village, where you see more tattoos than ties. I’m sure we were equally surprised to find that dying unloosened Jack’s tie and allowed us to establish a connection that had long eluded us.

When Siri told me that there are 15 hospices outside of Manhattan, I snapped back, “I want one in the city.” She was no more helpful than Yelp or Google had been. Shouldn’t TripAdvisor include hospices in its listings? A palliative care nurse gave me the name of the one hospice in the city, letting me know it has only 25 beds. Was dying like everything else? Did you have to know someone?

“Our turnover is high,” the woman at Haven Hospice told me on the phone, assuring me that within days, there would be a bed. And there was. Jack and I, who had been in many taxis together, were having our first (and last) ride in an ambulance. It was the only time he didn’t give a driver a generous tip.

Hospice conferred normalcy on dying, though the exit signs seemed redundant. Each room had a view of the East River that contributed to the facility’s serenity. I’d brought with us spaghetti and Diet Coke, the two things Jack was craving. A man who’d dined at fine restaurants everywhere in the world was now eating minuscule amounts of soft foods. I fed him with a plastic fork. Beaming, he said, “This spaghetti is so good. What is it?”

“It’s spaghetti to die for.” Instead of the wince I’d expected, he smiled. We’d given up trying to change each other. What he’d perceived as my flaws were now valued assets. Jack appreciated that I was direct with his doctors. He told them, “My sister is my strength.”

Despite our differences, no brother was more devoted or generous. In Jack’s apartment was a picture of me as a toddler, about to take a tentative, early step. At eight, his hand was extended, prepared to catch me if I should stumble. That arm was there my entire life, making sure I didn’t fall, giving me whatever I needed. That hand corrected essays and papers I’d written, teaching me about structure and style. Jack had modeled how to be a loving sibling. It was my turn to reach out my hand to him and demonstrate what I’d learned.

He was responding to my playfulness, and we agreed to make his remaining days as much fun as we could. I bent the hospital straw the way I’d seen the nurses do and placed it in his mouth. After taking a sip, he let the soda slosh around on his tongue as if it were a grand cru. “How much Diet Coke did you get?” he asked.

“Six cans. For you, that’s a lifetime supply.” Again, he found me amusing. “How about I interview you and I’ll read your words at the funeral?” He hesitated, but didn’t refuse. I opened the pad I’d brought, not sure what I would ask until I started. “Do you remember my first word?”

“Stop smoking.” Jack probably imagined I would scold him about not taking care of himself, as had been my habit, but I laughed.

“Are you afraid of dying?” I asked.

“No,” he answered. “Curious. I’d like to last another 10 years. You’re making it too nice for me. I can’t think of anybody going so peacefully.” (He actually said, “peaceful,” but he’d taught me about adverbs and it was my turn to do the editing.)

Two days before Jack would die, as I was leaving his room, I heard something. He was singing, “The sun’ll come up tomorrow.” I dropped my bag and we sang together. It was spontaneous and intimate, unlike the perfunctory rounds of “Dayenu” we’d done at seders. Our new relationship would be short. Every moment mattered. I was reluctant to go home.

“I’m taking up so much of your time,” he said. Jack was more comfortable giving than receiving.

“You were there for my birth and I’m here for your death,” I told him. His eyes welled up when I said, “It’s my privilege.”

He responded with a Yiddish expression I didn’t understand. Still teaching, he translated that I would get no reward for these efforts. “You’re dead wrong,” I countered. “The look on your face is the best thing you’ve ever given me.” I reached for my iPhone and played a song from our childhood home, the tearjerker, “My Yiddishe Mama.” “How are you not crying?” I asked.

“I’m thinking about what I want Mama to cook for me. Maybe gefilte fish.”

“I have bad news for you,” I told him. “I have her grinder.” That got the biggest laugh.

His hope of rejoining our parents shocked me and inspired me to say, “If you actually end up someplace and you’re with Mama and Daddy, I want you to send me a sign. I’ve heard stories about clocks stopping. Yeah, stop a clock in our apartment, nothing big that will require the super to come up.” He nodded, the way he had when we both knew he would ignore my suggestion that he join a health club or switch to low-fat cream cheese. But maybe the new Jack would be more cooperative.

Before the funeral started, as I stood in the cemetery’s office, I felt the crystal necklace I’d put on that morning slither off my neck and saw it fall to the floor. A few days later, I took it out of my purse to examine it with the friend who’d given it to me several birthdays ago. The clasp was intact, but the string looked as if it had been yanked apart. She grinned. “The sign from Jack?”

“Maybe you’re right. He never did what I told him to.”

On July 6, exactly a month after Jack had died, I was in our building’s laundry room. For the first time in the 33 years I’ve lived in the building, the hands on the wall clock weren’t moving. It said 9:44. It was actually 4:12.

Sybil Sage is a TV writer whose credits include the Mary Tyler Moore Show and Northern Exposure; she has also written for many magazines and the New York Times.