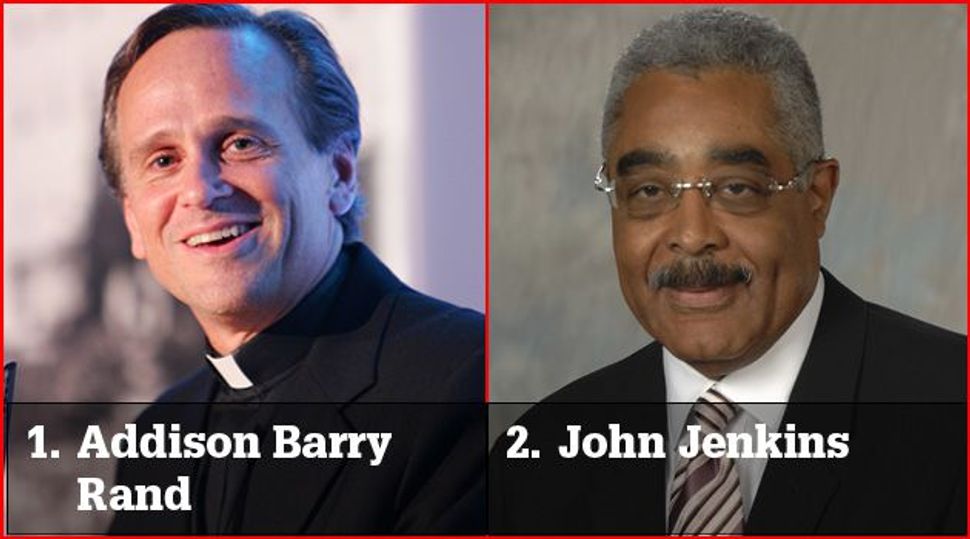 A Different Gap: Addison Barry Rand leads the AARP, John Jenkins leads the University of Notre Dame. CEOs of Jewish charities in the salary survey are better paid than their non-Jewish counterparts. Image by Kurt Hoffman

Think the top Jewish not-for-profit executives in the Forward’s 2013 salary survey are overpaid? Their colleagues at non-Jewish charitable institutions might agree with you.

According to an independent analysis of the Forward’s annual survey of national Jewish not-for-profits, Jewish executives are paid more generously than executives of comparable non-Jewish charities.

Take, for instance, Miami’s United Way and the city’s Jewish federation. The two groups have plenty in common. Both raise money to spend on health care and disaster relief; both distribute tens of millions a year inside and outside Miami-Dade County. Their offices are just 10 minutes apart by car.

They differ, however, in how they pay their CEOs. While United Way of Miami-Dade is bigger than the Greater Miami Jewish Federation and spent $11 million more than the federation in 2012, it paid its CEO more than $50,000 less. At the federation, Jacob Solomon took home $460,676, while at United Way, Harve Mogul earned $408,698.

“[T]hese non-Jewish organizations are systematically paying their executives less than Jewish organizations would,” wrote Abraham Wyner, a professor of statistics at the Wharton School at the University of Pennsylvania, in his analysis of the Forward’s salary survey. Wyner emphasized that these findings are “not supposed to be publishable research” and describe only the organizations the Forward surveyed. They cannot be applied broadly to all Jewish and non-Jewish charities.

They do help contextualize, however, the Forward’s annual list on the compensation of Jewish charity executives. Wyner’s analysis of the Jewish not-for-profits allowed him to predict a salary based on the size of each organization. Thirteen of the 16 executives of the non-Jewish groups surveyed would have earned more had they worked for a Jewish organization, according to Wyner’s formula.

The results suggest that the executives at the non-Jewish charities “are relatively underpaid (or rather, that Jewish CEOs are relatively overpaid) once we control for size,” Wyner wrote.

The Jewish organizations surveyed are the same federations and national organizations that have been included in the Forward’s annual report on executive compensation since it was first published in 2009, plus some new additions. The Forward has not previously included non-Jewish groups in its annual survey.

Maia Efrem, the Forward’s research editor, selected a set of 16 non-Jewish charities to compare with the Jewish groups. “We didn’t just want to shoot in the dark, we wanted to get organizations that were as analogous in size and in their mission as we could to the Jewish organizations,” Efrem said.

Efrem included local chapters of United Way, which function similarly to local Jewish federations. She also included advocacy groups like the Environmental Defense Fund and the National Council of La Raza, plus religiously oriented universities like the Catholic University of America, to match similar Jewish organizations on the Forward list.

Wyner found that CEO salaries at both the Jewish and the non-Jewish groups were 2% higher for every 10% more the group reported in annual expenses. The differences in compensation came not from the size of the groups, but from some other factor — perhaps from a different base estimate of how much CEOs should be paid.

Jewish groups may be structured in a way that impels them to pay more.

According to Mark I. Rosen, an associate professor at the Hornstein Jewish Professional Leadership Program at Brandeis University, boards of directors at Jewish not-for-profits are generally thought to have more direct control over their organizations than the boards at other not-for-profits.

“Anyone I’ve spoken with in the past who has been involved extensively with both Jewish and non-Jewish nonprofits invariably tells me the biggest difference between the two is the board, and the influence of board members on organizational decisions,” Rosen said.

The Forward analysis was described to Rosen, though he did not review the methodology or the data. Rosen said that if the Forward’s findings are correct, they could be due to the combined effects of Jewish groups’ more powerful boards and to the concentration of businesspeople on those boards.

“There’s just going to be a different mindset in terms of what an appropriate compensation package is for an executive if the board is primarily composed of people from the business sector,” Rosen said.