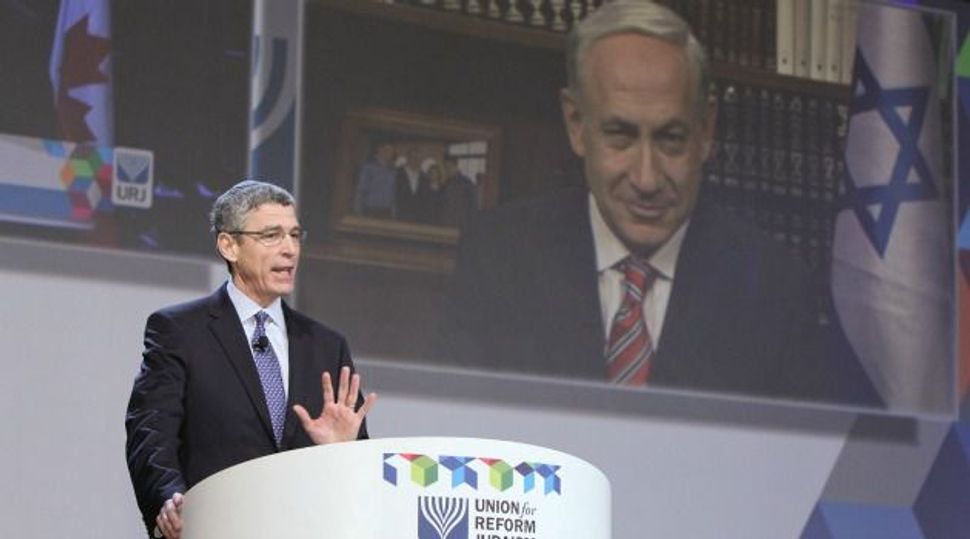 When Israeli Prime Minister Benjamin Netanyahu spoke from Jerusalem recently to Reform Judaism’s large biennial conference via Jumbotron, the 5,000 Jews gathered here offered only pro forma applause as he restated his commitment to a two-state solution for Israel’s 46-year occupation of the West Bank.

But then, Netanyahu turned to the issue of religious pluralism in Israel. And the crowd snapped to attention.

“The Western Wall is in Israel but it belongs to all of you,” he said, offering a clear applause line. In response, his audience erupted with a loud and sustained outburst of cheers that made its priorities clear.

For the Union for Reform Judaism, which met in San Diego from December 11 to 15, the main issue of the day was obvious from the start. Meeting in the shadow of the Pew Research Center’s landmark survey of American Jews released in October, the key question on most lips was: What to do about the shrinking number of active young Reform Jews?

For most of those present, the answer to this problem was clear. In workshops and discussion groups, and in plenary speeches by the movement’s star speakers, the idea recurred like a drum beat of Israel at the center of the movement, rallying its young minions against the forces of assimilation and disengagement. And in the conference’s programming, the emphasis on engaging youth in the Israel experience focused specifically, if not exclusively, on the issue of religious pluralism.

“At least once a week read something about Israel which is not about security,” Noa Sattath urged the crowd, speaking on behalf of Anat Hoffman, who leads Women of the Wall, the group that has been fighting for the right for women to conduct formal prayer services at Judaism’s holiest site.

Hoffman, who was on the stage but could not speak due to laryngitis, was honored at the gathering for her role over 25 years in seeking to wrest exclusive control over prayer at the site from Orthodox authorities.

Whether by chance or design, the emphasis on religious pluralism at the conference seemed to crowd out other aspects of Israel that might engage youthful passions for social justice. Indeed, there seemed at times to be a conscious effort to dial down the potential allure of issues related to human rights, the Palestinians and Jewish settlements in the occupied West Bank.

Akiva Tor, who heads the Foreign Ministry’s Bureau of World Jewish Affairs and World Religions, told the Forward, “The weighty issue of strategic concern should not be the entrance point, but an outgrowth of a love and understanding of Israel.”

And at a session led by the Association of Reform Zionists of America, David Siegel, Israel’s consul general in Los Angeles, damped down the idea of engaging young Jews with the Palestinian issue, saying, “How many people would be excited about Israel if the only conversations were about ‘crisis?’”

During the conference there was virtually no mention of the word “Palestinians.” Terms like “strategic concerns” and “security issues” were used consistently by speakers when referring to them or to the issues they embodied. The only speaker who cited Palestinians by name from the podium at any length was Netanyahu, during his speech from Israel.

For David Saperstein, director of the Reform movement’s Religious Action Center in Washington, the focus on using Israel to engage young people with a heavy emphasis on the issue of religious pluralism was easy to understand.

“Pluralism is flying right now, and capturing the dreams and hopes of so many people,” he told the Forward. Meanwhile, “No one really knows much about the ongoing negotiations,” he said, referring to the current round of Israeli-Palestinian peace talks. Noting the Reform movement’s “consistently outspoken” support for a two-state solution and criticism of the government’s policy of establishing Jewish settlements on the West Bank, he said, “If the negotiations reach the point of a big controversy, then we will address it.”

“We want to reach people where they are,” said Saperstein. “Israel is a way to inspire and motivate many young people, so a big piece will be expanding our very successful programs in Israel.”

There was no doubting the grassroots enthusiasm at the conference for this approach. The issue of religious pluralism was cast in vivid civil-rights terms.

The opening plenary also honored the life’s work of Rabbi David Hartman, founder of the Shalom Hartman Institute in Jerusalem, where he initiated many seminal programs on pluralism and intracommunal dialogue in Israel. The URJ posthumously awarded the late Orthodox rabbi its Alexander M. Schindler Award for Service to World Jewry.

Sessions and workshops on Israel and religious pluralism were frequently packed, implicitly affirming the issue’s potency.

Nevertheless, at prayer services on Shabbat, where attendees could actively practice their pluralist commitment, the area of the hall marked off for worshippers in their 20s and 30s was noticeably compact. The majority of those present were rabbinical, cantorial or education students from the Reform movement’s Hebrew Union College-Jewish Institute of Religion — young adults already committed to a professional life in Reform Judaism.

Attendance was similarly sparse even at Israel-related workshops that dealt with issues other than religious pluralism. The World Zionist Organization offered one session featuring a game by which attendees could learn about Israeli politics. But fewer than a dozen people showed up. A session on the “mapping” of Israel drew some 30 attendees, much smaller than the pluralism sessions. There, ARZA President Josh Weinberg asked participants to pick their own map of Israel from four choices, one of which was drawn from the Palestinian point of view.

Tor said he was very encouraged by the emphasis on Israel and religious pluralism. “There is a real Israeli element to Reform Judaism here, which loves Israel and is deeply Zionist,” he said.

Asked if the state he represents was prepared to respond to Reform pluralism concerns, given native Israelis’ relative lack of interest in the issue, Tor replied, “We understand what we’re being asked to do. And I think that Reform Judaism understands what it’s being asked to do in terms of deepening this engagement.”

For Rabbi Bradley Solmsen, director of youth engagement at the URJ, Israel plays the key role in helping Reform youth find their version of Judaism. “Israel is the concept where we can best show young people that Judaism is alive, surrounds and envelopes,” he said. “Israel is the place where they can understand that it is all connected. It’s complicated and messy, but it’s all connected.”

In his plenary address to the conference, Rabbi Rick Jacobs, URJ’s president, cited Taglit-Birthright, the program offering young adults free 10-day trips to Israel, as perhaps the main pillar on which Reform Judaism relies to reach young adults after they leave the movement’s own program, the North American Federation of Temple Youth.

Noting that 80% of the movement’s youth “are out the door by 12th grade,” Jacobs declared that “with our partners at Taglit-Birthright Israel, we are kindling a Jewish spark in so many of these young, unconnected Jews.”

The Reform movement’s own programs include a four- to five-week NFTY tour of Israel for high school juniors. In November, a group of teenage NFTY delegates also embarked on a self-initiated mission to Israel to join in the celebration of Women of the Wall’s 25th anniversary. And this summer, a branch of URJ’s Mitzvah Corps program, aimed at young Reform Jews interested in social justice, will operate for the first time in Israel.

“If you speak with the large number of American Jews who care about Israel, their concerns focus more upon the Israel-Palestine conflict, the expanding number of Jewish settlements in the West Bank and the ongoing moral challenge embodied in what even Prime Minister Netanyahu calls the Occupation,” said Cohen, who is currently a Research Professor of Jewish Social Policy at HUC-JIR.

At age 28, Yael Dadoun is arguably both a product and representative of the Israel youth engagement journey on which the Reform Movement is poised to set sail. A holder of a master’s degree in education from HUC-JIR, Dadoun described first-hand encounters with Israel as crucial for Reform youth “to help them find their religious narrative.”

No one was expecting those going on such trips to give up their critical faculties, said Dadoun, who has led Birthright trips and NFTY summer tours of Israel. “I don’t need you to love Israel,” she said. “But I believe it is impossible to love nothing about Israel.”