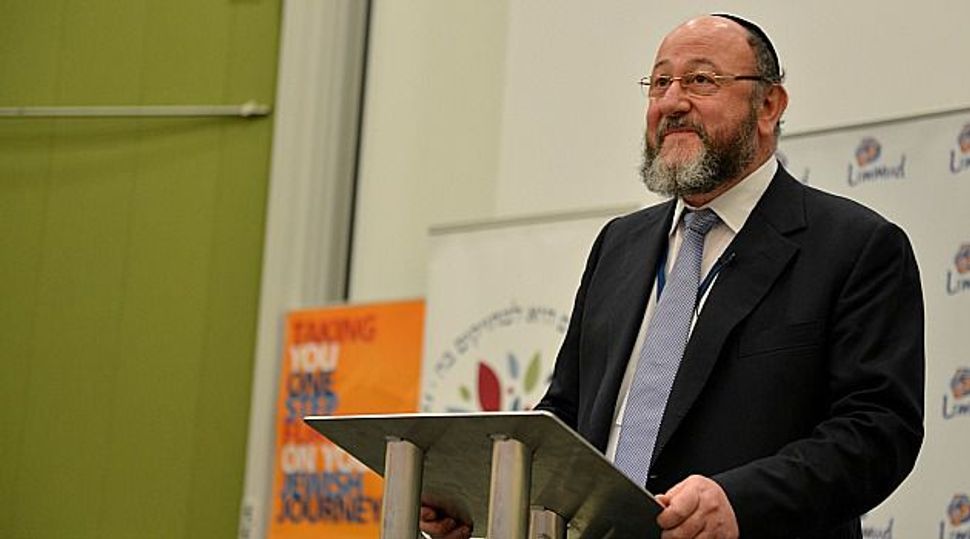 In the decades since a bunch of British Jews created Limmud, its model of volunteer experts offering a pluralistic smorgasbord of Jewish teachings, arts offerings and performances has turned into a worldwide movement. But through all these years, the chief rabbi of the United Kingdom has never attended Limmud in the country where it all started.

So just the mere presence today of Ephraim Mirvis, who has held the powerful position of chief rabbi for only a year, created a buzz here.

Observers were well aware that the previous chief rabbi avoided attending Limmud, even when his own son-in-law helped run the multi-day conference, which attracts thousands of Jews to a windswept university campus in the middle of England. Limmud’s core principles of egalitarian openness were evidently too much for the leader of British Jews to countenance.

The room in which Mirivs spoke was thus jammed with an eager audience and a phalanx of security. Many more listened in an overflow room.

What they heard on the surface was an engaging if conventional teaching about the Torah portion of the week – specifically, the second chapter of the book of Exodus, beginning with the birth of Moses.

But the subtext was, in my opinion, startling for its message: Mirvis used the figure of Moses not only to illuminate leadership qualities and to emphasize Jewish unity. He also forcefully spoke of the need for “universalistic ideals” and the imperative to be concerned about other people, to “not exist in a self-imposed ghetto away from the rest of the people in the world.”

“When we exist only for ourselves, when we disregard members of other communities…that might be a pious way of life but it is a treyf way of life.”

Mirvis may be new in his position, the only one dressed in a suit in this decidedly casual crowd, but my sense is that he knew exactly what he was doing by drawing that lesson in his maiden speech at Limmud, a movement that many say reflects his future constituency. This is a gray-haired conference, but also a hip and edgy one. (Last night I attended an SRO session run by four hilarious and occasionally profane young women who call themselves “The Misogynists Film Club.”)

He needs the allegiance of Limmudniks if he is going to be able to maintain the centrality of his office. British Jews are more moderate and affiliated than American Jews, but they are not immune to the opposing trends of fundamentalism and assimilation that are tearing away at the broad center among their co-religionists across the pond.

So Mirvis is walking a very fine line. He recently angered feminists by dismissing the “partnership minyans” that allow for more female participation in Orthodox prayer services. But his words here will resonate, and so will his appearance.

He smartly opened by noting that at Limmud, “it’s impossible not to feel that it’s great to be Jewish and I’m delighted to be a part of it.” The audience clearly appreciated this legitimization.

He was a forceful speaker, at times charming, moving fluidly from referencing the new Prince George, the late Nelson Mandela, Kabbalah and lots of traditional Jewish texts, to story-telling that left the audience laughing.

While his central message was a standard mix of hope and faith, he tucked a universalistic theme into many of his comments. Moses achieved greatness even though he came from humble beginnings; that is, we all have the capacity to be leaders. In killing an Egyptian slavemaster and fetching water for the Midianite women who were otherwise ignored, Moses fought injustice and aligned himself with the oppressed; that is, we all should be willing to do for others.

At one point he even said that the purpose of Torah study is to be “in tune with those around us.”

But it was his closing affirmation of universalistic ideals that impressed me. Mirvis told the audience that they must be totally devoted to their fellow Jews, but that wasn’t enough. They also needed to be concerned about other people, “to reach out to all mankind.”

I suspect that a message like this would be greeted with a shrug by most American Jews, who are innately outward-focused and generally tolerant of other communities. Probably by most British Jews, as well.

But coming from the bastion of the establishment here, it means more. You could read these words as a sly slap at the ultra-Orthodox leadership that condemned Mirvis for even attending Limmud. I’d like to believe that the leader of an important Jewish community is instead saying that Jews cannot be so single-minded about their own survival that they ignore the plight of others and the imperative to combat injustice.

Who are those others? He didn’t say. That is for the rest of us to decide.