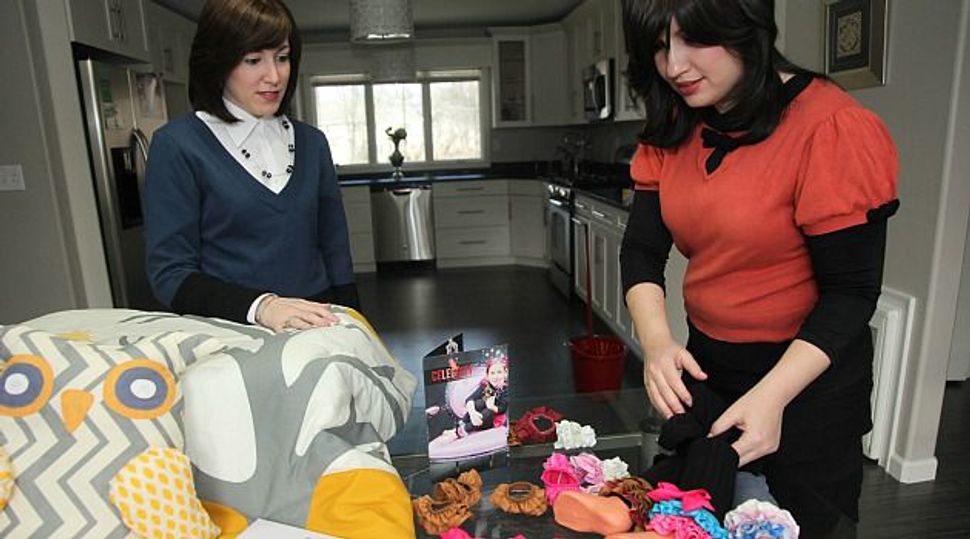 Marketing Meyvintes: Rosie Kraus (right) and Chavy, who would allow use of only her first name, launched their careers as entrepreneurs after watching episodes of the reality TV show ?Shark Tank? on YouTube. Image by shulamit seidler-feller

Sheryl Sandberg has come to ultra-Orthodox Monsey, N.Y. — or at least her gospel has.

The walls of the Orthodox school assembly hall in which her message is delivered are bare white, but for three posters with Hebrew writing, and six larger-than-life paper teddy bears. But the roughly 100 women who fill the hall on a chilly Monday night in late December 2013 counterbalance the spartan venue with their impeccable dress, and with each hair on their wigs perfectly smoothed.

“An Evening of Excellence” is the event’s name, and once the audience has been hushed, Davii Mandel steps up to the stage and asks her audience, “What would you do if you weren’t afraid?”

The question is a direct quote from the book “Lean In,” written by Sandberg, Facebook’s chief operating officer. Mandel, who owns a catering company, is one of four newly appointed leaders for the Monsey/Spring Valley city chapter of the Jewish Woman Entrepreneur.

Founded in 2011, the JWE is a growing not-for-profit group that connects Jewish women starting or running their own businesses. The vast majority of women who reach out to the JWE are traditionally observant: both Orthodox and ultra-Orthodox. After Baltimore, Monsey is the group’s second local chapter, and its formal roll-out is this very meeting. Eleven more city chapters in places such as Brooklyn; Lakewood, N.J.; Minneapolis; Cleveland, and Miami, are scheduled to kick off in the first few months of 2014.

The guest speaker this night is Judy Greenfield — a businesswoman, Satmar Hasid and mother of seven. The 41-year-old entrepreneur started selling tiles from her Monroe, N.Y., basement in 1996. Today she runs a multi-million dollar business that specializes in tiles and granite counter plates. Though her husband is her business partner, Greenfield says that she is the one making the big financial decisions.

Greenfield’s children range in age from three to 22. But when she goes on business trips, there is always someone in the family to step in, Greenfield explains — she has 13 siblings, and her husband has 11.

“My kids call me four times a day,” she tells the audience. “It’s not either/or; you can run a business and still be a good mother.”

This part of the Sandberg gospel addresses what many of the roughly 800 Orthodox and ultra-Orthodox women who have reached out to the JWE worry about most, says Chaya Appel-Fishman, JWE’s founder and president. “Many have pretty large families, which means that besides the juggling, there is enormous pressure for the venture to succeed.”

What helps, says Samuel Heilman, a professor of sociology at Queens College who has studied Orthodox movements, is coming from an entrepreneurial family, as Greenfield does. Her father started his own textile business.

Succeeding at starting a business is not easy for anyone. U.S. Bureau of Labor Statistics data show that less than two-thirds of all start-ups make it to age three; only 35% survive their first decade.

In Ashkenazi culture, female entrepreneurship has a long tradition, with women supporting the family while husbands study in yeshivas. But the number of Haredi women attempting to establish businesses is still relatively small. The UJA-Federation’s Jewish Community Study of New York from 2011, which surveyed the eight county New York area (but which does not include Monsey) showed that only 8% of Hasidic and Yeshivish women in New York were self-employed. This compared to 12% of non-Orthodox Jewish women. Almost a quarter of all Orthodox women work as teachers and instructors, according to data from the National Jewish Population Survey 2000-01.

The group that has gathered in Monsey is mostly Hasidic. Their communities are rapidly growing due to high birth rates. According to the UJA-Federation study, families in New York-area Hasidic communities have on average 5.8 children. Hasidic communities are also among the most economically vulnerable, making up 63% of poor, and 58% of near poor Jewish households. Only 16% of Hasidic men, and 11% of women hold a college degree. In heavily Orthodox Monsey, median household income is $34,435 compared to $86,020 in Rockland County, where the town is located.

At the JWE Monsey gathering, Greenfield’s speech is followed by discussion sessions at each of the eight round tables that form a semicircle around a small buffet. At one table, Greenfield talks about the challenge of setting one’s own goals as an entrepreneur. Among her listeners is Chavy, a 32-year-old Hasidic mother of four, who requested that her last name be withheld. She lives in Monsey and has worked for more than a year to get her baby bedding line off the ground. She has recently signed a deal with an investor, and is currently manufacturing the bedding in a Chinese factory.

Chavy attended a one-day JWE conference in New Brunswick, N.J., in May 2013 and said she learned a lot about branding, marketing and pitching. Before discovering this resource, Chavy, who has a high school diploma, gleaned her business knowledge from watching episodes on YouTube of the reality TV show “Shark Tank,” in which aspiring entrepreneurs pitch to investors.

“Shark Tank” was the go-to source for Rosie Kraus, too. The mother of three has designed children’s leggings and socks. They come with a set of decorative ruffles in various colors and designs — including a Christmas-themed one. The idea is that children can choose and attach ruffles themselves for every outfit. Kraus has a patent pending for her concept, and is poised to get her product out there — even if that meant going on to “Shark Tank” herself: “I’ll probably be the first Hasidic Jewish woman to go on,” she said. Kraus is currently in the process of finalizing a deal with an investor.

Neither Chavy’s husband nor Rosie’s husband studies full-time in yeshiva. Chavy’s spouse is a professional chef, while Kraus’s has scaled down his work as a music therapist to help her with the administrative parts of her business. It is as if they had already listened to Greenfield’s advice for success: “Make it a team effort.“

Ayala Fader, a social anthropologist at Fordham University who has worked with Hasidic communities in Brooklyn, saw no inherent contradiction in the strictures of Hasidic communities and the entrepreneurial ethos JWE seeks to encourage. “I don’t see where the business would make any sort of conflict as long as they could fulfill their roles at home,” she said, referring to the women.

With so many children at home, that may seem like no minor caveat. But Harriet Hartman, a sociologist at Rowan University who researches gender, Judaism and work, said that entrepreneurship can be more suitable for family-oriented Haredi communities than a nine-to-five job because it allows for flexibility. “You can put it in the framework of, ‘This is good for the family,’ and then it’s acceptable,” she said.

When it comes to doing business, women are often more comfortable than men in a secular milieu. As girls, they receive more secular education than boys, who focus on Talmudic studies. As a consequence, Hasidic women often speak better English than their male counterparts.

Greenfield said that being observant had rarely caused her problems with secular customers. Some ultra-Orthodox strictures, such as a prohibition against shaking hands with persons of the opposite sex, could even be advantageous, she argued. “I don’t have a relationship with anyone in the business world besides a business relationship,” she said.

Most businesses owned by women in the ultra-Orthodox community focus on needs within the community, according to Fader. But Kraus and Chavy have a bigger vision. They market their products to secular and non-Jewish customers, too.

Last October, the two women attended a four-day trade show together in Las Vegas. The show finished on Friday afternoon, leaving just an hour until the beginning of the Sabbath. So the women decided to dismantle their booths on Saturday night, after the day of rest was over, and then catch their flights back on Sunday morning. When they returned to the convention center Saturday night, their booths had been robbed. Despite this, they were not disheartened. Chavy said, “I’m sure God has a reason for this, and we’re going to be a lot stronger and bigger because of that.”