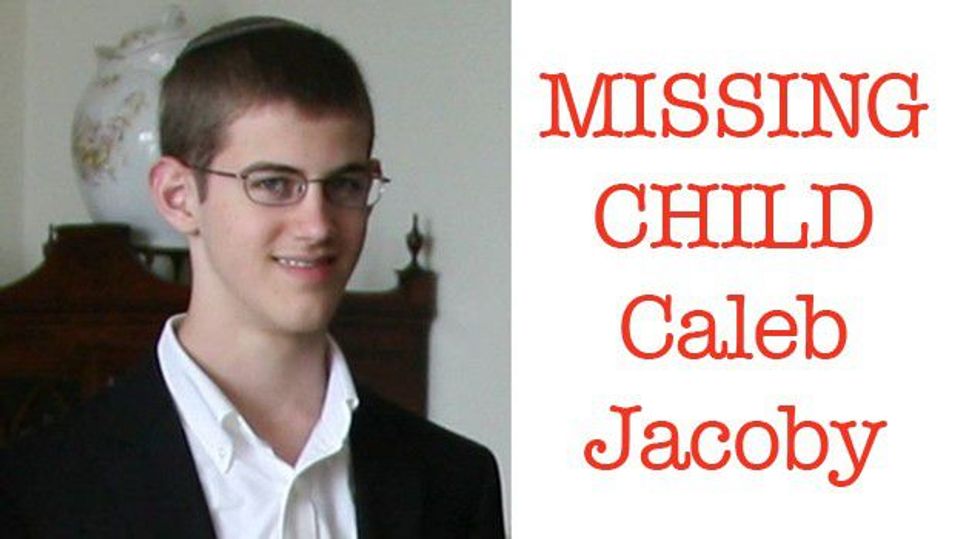 Boston Globe columnist Jeff Jacoby took to Twitter to thank all those helping in the search for his missing teenage son — and plead for more help in the case.

The dad’s poignant plea came as police continued to hunt for Caleb Jacoby, an 11th grader at Maimonides School in the Boston suburb of Brookline, who has been missing since about 12:30 on Monday afternoon, according to reports.

We are so deeply, deeply grateful for everything being done to reunite us with our beloved son Caleb. pic.twitter.com/o7wHTr0BrA

The Combined Jewish Philanthropies, Maimonides School and Young Israel of Brookline, as well as other local Jewish organizations, have all joined in the search for the boy. Barry Shrage, president of CJP, issued a statement to the Boston Jewish community saying that his organization is anxious to help in any way they can.

Fliers with the boy’s photo have been distributed throughout the Boston area and around the world via social media.

Maimonides School announced on its Facebook page on Wednesday that searchers would be scouring the area.

Levi Lebowitz, a classmate of Caleb Jacoby at Maimonides, said “the level of support has been amazing.”

“There are a multitude of search parties looking for him and putting up fliers while many students have been calling different areas to spread the news about Caleb,” he wrote in an email to the Forward. “The school has also set up a team of social directors to work with the students in order to put together the pieces and hopefully determine a place where Caleb could be.”

Lebowitz described Caleb as “extremely smart and in honors for a lot of his classes.” The Cleveland Jewish News reported a Brookline police statement that Jacoby was last seen wearing navy chino pants or jeans, a navy polo shirt, a brown winter jacket with a hood, brown shoes or sneakers and white socks. He can often be found at public libraries and Young Israel of Brookline on Green Street, and is described as having a thin build and short, light brown hair.

A prayer vigil was held at Young Israel of Brookline, a local synagogue, on Tuesday evening. In an email to the congregation, Rabbi Gershon C. Gewirtz urged everyone to attend.

“Laura & Jeff Jacoby are living one of the worst nightmares possible for parents; their son Caleb has not been seen nor heard from, since approximately 12:30pm yesterday afternoon,” he wrote. “Caleb is undoubtedly living his own nightmare, being away from his mother, father and younger brother Micah, the people of his world who love him beyond words. His current circumstance may also be beyond his abilities to manage… B’ezras HaShem we will find him very soon, healthy and well.”

UPDATE: ABC reports that Caleb Jacoby may have been sighted in Providence, Rhode Island.

Brookline Police Captain Thomas Keaveney said Wednesday that there was no reason to suspect foul play. “We’re leaning more toward a runaway, but we can’t be sure,” he said, without elaborating.

Boston friends and neighbors and local Jewish groups have joined the search, many of them turning to social media to plead for any information or leads.

The Boston Globe, which had been silent about the case, also published its first piece about the missing teen online Wednesday.

Please RT. Imagine if it were your son. Look at Caleb Jacoby’s picture and keep an eye out in Massachusetts. http://t.co/sGFAvGfHCE

Caleb is the son of Globe columnist Jeff Jacoby, and my brother’s best friend. He’s been missing since yesterday. pic.twitter.com/FVhRdUMrQu

Caleb Jacoby, an 11th grade student at Maimonides School, has been missing from home since yesterday. The school… http://t.co/KRMnHJSnJ7

For many years, near his oldest son’s birthday, Jacoby,wrote a special [column][6] called “Letters to Caleb.”

In the latest one, written in time for Passover in 2009, just before Caleb’s bar-mitzvah, Jacoby pondered what kind of man his son would become.

”Which is the real you, Caleb? Are you the budding philosopher who has taken to insisting lately that “nothing really matters,” since no matter what any of us does or doesn’t do, the universe won’t notice? Or the perennial naysayer who surprised me by saying yes when I proposed that you sign up for sailing lessons at Community Boating – and then surprised me even more by thoroughly enjoying the experience? Are you the sarcastic kid who mocks Mama when she loses her patience with you? Or the affectionate big brother who lavishes attention on Micah? Is the authentic Caleb the sometimes sullen pre-teen with the seemingly bottomless reserve of grievance and indignation? Or the industrious helper who for the last few days has rolled up his sleeves and good-naturedly pitched in to get the house ready for Passover?”

“He is more on the quiet side,” he added. “He could be seen many days staying after school and doing schoolwork.”

Anyone with information is being asked to contact the Brookline Police Department at 617-730-2222.