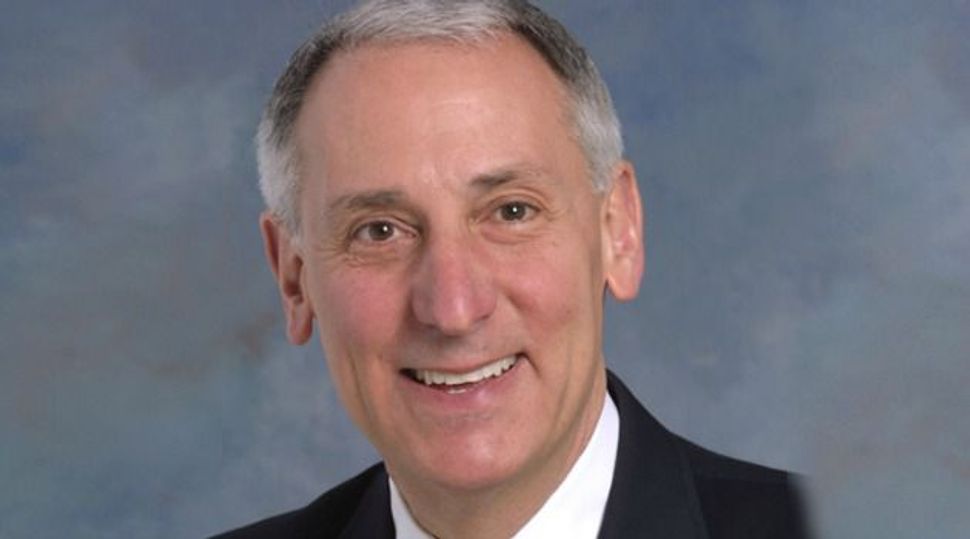 Zionist Rules: Eric Fingerhut took the reins at Hillel in the summer. Little did he know that controversy was about to erupt in the national Jewish student group over its pro-Israel guidelines. Image by hillel

“We welcome every student. We love them. We embrace them.”

So said Eric Fingerhut, who just four months into his job as president and CEO of Hillel International is embroiled in a debate about how far Jewish students can push the limits of Israel discussion from within the Hillel tent.

“Any student that doesn’t feel welcome, that is our failing,” Fingerhut added.

Fingerhut, 54, was speaking from his home in Columbus, Ohio, just 150 miles from where he was born and raised in Cleveland. Since taking over as leader of the Jewish campus organization from Wayne Firestone at the end of August, Fingerhut has had to fight two fires related to the Israel debate on campus.

First there was the decision by Harvard Hillel to withdraw from co-sponsoring a talk by Avrum Burg, a former speaker of the Israeli Knesset, not because of Burg’s views but because the event was also co-sponsored by Harvard College’s Palestinian Solidarity Committee. (Harvard Hillel organized a separate, private event for Burg instead.)

The following month Swarthmore College’s Hillel student board voted to defy guidelines on campus Israel activities and declared themselves the first “Open Hillel” in the country.

The showdown on a small liberal arts campus, which seemed to pit free speech against Jewish communal skittishness regarding Israel debate, drew a less-than-flattering December 28 article in The New York Times.

This has frustrated Fingerhut, who arrived at Hillel with strong pro-Israel bona fides. As a Democratic Congressman from 1993 to 1994, he co-sponsored several pro-Israel bills, including a 1993 law that sought to break the Arab League boycott of Israel.

He also has the kind of background that ought to appeal to younger, liberal college students. He comes from a staunch Democratic household; his aunt was a union organizer. When he was 15, Fingerhut lost his father.

During the late 1980s, Fingerhut was a chair of the watchdog group Common Cause Ohio. In his first term as an Ohio state senator, from 1991 to 1993, he “worked on recycling, clean air, campaign finance reform, and gun control,” according to Kurt F. Stone’s 2010 book, “The Jews of Capitol Hill.”

Although this is Fingerhut’s first foray into Jewish professional leadership, he points out that he has been president of a conservative synagogue in Columbus, Agudas Achim, and a lifelong supporter of Israel. Fingerhut attended Hillel as a college student at Northwestern University and later at Stanford University, where he studied law.

He recalls sleeping in the Sinai desert as a youth in the summer of 1978, shortly before the land was returned to Egypt. And he recalls witnessing King Hussein of Jordan and Israeli Prime Minister Yitzhak Rabin addressing a joint session of Congress in 1994.

Though Hillel International is based in Washington, Fingerhut decided to stay in Columbus temporarily to avoid disrupting his children’s schooling. He and his wife, Amy Fingerhut, and their two sons, Sam and Charlie, ages 12 and 8, will move to Washington at the end of the current school year.

The guidelines that have caused such a ruckus were drawn up in 2010, long before Fingerhut arrived at Hillel.

Fingerhut has taken pains ever since to underline the difference between Hillel’s willingness to entertain and engage each students’ views on Israel, and the imperative to uphold the guidelines that prohibit campus chapters from hosting speakers or co-sponsoring events with those who deny Israel’s right to exist as a Jewish state or who support sanctions or boycotts of Israel.

It was precisely because of these guidelines that Swarthmore students decided last December that they would break from Hillel. Its board announced that it would welcome everyone, “be they Zionist, anti-Zionist, post-Zionist or non-Zionist.”

Fingerhut is still in negotiations with the student board of Swarthmore Hillel over what happens next. But in a public letter to the students, he made it clear that they could not continue to use the Hillel name if they contravened the guidelines.

Fingerhut, who comes to Hillel after stints as chancellor of the Ohio Board of Regents, says that all organizations lay down parameters for their work.

“I respectfully submit, there isn’t any organization that would say that anyone who comes in the door and proposes any speaker or any sponsored event” would allow someone to speak “regardless of who that partner is or what that speaker is,” he said.

Hillel’s supporters, including current and former directors and donors, several of whom spoke to the Forward on only condition of anonymity, stress that Hillel is an inclusive organization that wraps its arms around a broad swath of political views and religious beliefs.

They say the guidelines were developed over many months with input from professionals and students across the Hillel community.

Lynn Schusterman, a prominent donor to the group, reflected the views of many when she said in a statement to the Forward, ”I believe Hillel is committed to creating an inclusive space to welcome and serve all Jewish students, but it must not become a platform for sponsoring those who seek to delegitimize, demonize or boycott Israel.”

Last year, in February, a group of Harvard students created the idea for an Open Hillel movement, which was aimed directly at flouting Hillel’s guidelines. The students said that the guidelines stifle debate because they automatically prevent co-sponsorship and dialogue with groups that support boycott, divestment and sanctions against Israel, which includes most Palestinian organizations and some Jewish ones, such as Jewish Voice for Peace.

Hillel operates in one of the most febrile arenas, where passionate, intellectually curious college students are seeking not only to answer difficult questions, but also to find freewheeling debate.

Fingerhut accepts that such students’ views on Israel will be formed not just by their parents and their upbringing, but also by events in the Middle East over the six to 10 years before they enter college.

But Fingerhut, who served three terms in the Ohio State Senate in addition to his one term in Congress, said that the process of crafting guidelines, like legislation, is one of compromise. Legislators, he said, have to “make compromises in order to build support for what they want to do in the community they operate in.”

“That part of building consensus within the community is, frankly, part of the educational process, as much as mining in diverse points of view. If the definition of welcomeness is that every decision goes in exactly the way you like it, I think that’s not standard in any organization or family or community.”

As open and inclusive as Hillel is, at heart it is still the Zionist organization that was incubated by B’nai B’rith International over 70 years. But it is also no longer an organization tightly controlled by the center.

For decades, B’nai B’rith employed all Hillel employees. Then, 20 years ago, Hillel broke away. Its head at the time, Richard Joel, made each of the campus chapters independent, shifting power away from the center.

Hillel became like a franchise. The units signed affiliation agreements that laid out the framework for what each chapter could do under the Hillel name. They still relied on Hillel for programmatic support, training and grants, but campus chapters became semi-autonomous.

Today, those campus Hillels raise their own funds and are governed by local independent boards. Sometimes a university even pays toward a Hillel rabbi or Hillel director’s wage, like at Duke, Brown and Princeton.

Fingerhut says the setup is similar to his recent job as chancellor of the Ohio Board of Regents, a large, decentralized organization where he oversaw 14 public universities and 23 community colleges, each with its own individual needs that sometimes vied with the board’s common policies and goals.

Fingerhut said he embraces Hillel’s diversity: “I love the debate. I love the dialogue.”

If the past four months are anything to go by, there will be plenty of dialogue and debate for him in the future.